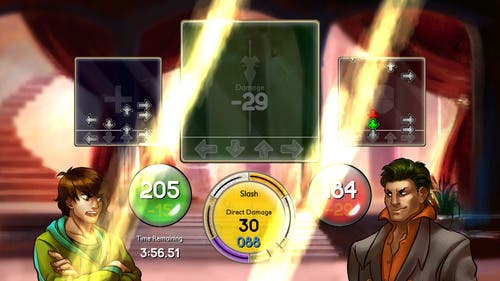 Hybrids are all around us: combat racing games, puzzle RPGs, first person / real time strategy, Prius’, and even peanut butter and jelly. Iridium Studios brings us a mash-up of two genres not likely to be friends: music and RPG. Sequence takes what made DDR famous and mashes it with RPG nature of battling enemies, gathering loot, and levelling up – combining to be one unusual, yet refreshing take thanks to this indie developer.

Editor’s Note: When Sequence was released, I wrote a story of how you could get the game for free (and still can if on NeoGAF). I felt it would be fair if I received the game for free, as I did – I should treat it as other complimentary copies of games we get and review it.

I’ll admit, music games haven’t been interesting to me in many years now. But playing Sequence made it enjoyable and interesting. The story starts off simple and witty banter is passed back and forth to no end, proving many laughs and references to internet memes abound. A lot of it also gets very self-referential, breaking the fourth wall in that games exist, and what this guy is experiencing is all too familiar. You are guided by a strange woman’s voice who provides the back-talk from your snarky self. There are no dialogue options to choose, but there are lengthy discussions between battles and locations – all voiced over with beautiful art and text bubbles.

You’re given plenty of tutorial time to learn the basics, how to set yourself up for battle and what each component does. I felt this to be one of the strongest attributes to the game as it introduced this hybrid genre well, allowing you to adapt accordingly.  The game does an excellent job at explaining the mechanics. This is one of those games where you need the tutorial or you’ll be turned off quite quickly.

Actually playing the game requires some multitasking though. You have 3 panes to manage: Spell, Mana, and Defense. Spell is your active attack. When initiated, arrows drop from top to bottom and you must sync them up as close as possible for the best attack. Mana is a window pane where you can miss most of the arrows and will have no negative affect on you until you run out of mana from casting spells. Defense is a pane you should focus mostly on so you don’t take too much damage and lose the fight. All panes are visible, but the center pane is active and what is accepting the button presses.

Spells are chosen before you battle, and slots are increasing at the game’s pace, but you can select them from a wheel and can be cast as soon as the cooldown timer has reset and you have the required mana to cast. Each floor of the hotel you are in has three enemies to fight with unique characteristics and common, rare, and treasure items to obtain to either progress in the game or progress your character into being stronger and better.

I was able to play this with a keyboard (no mouse input needed) with ease on PC. Once I plugged in my Xbox 360 controller, the game’s interface buttons changed to a 360 pad (no surprise given this was developed for Xbox Live Indie Games as well).  There are times where the game demands two arrows to be pressed, here you can use WASD and the Arrow Keys to express them properly without being ridiculous dexterous. Both control types are well suited for combat and it’ll just end up being your preference when it comes to playing the game.

The game can be as long or as short as you want it to be or how lucky the loot drops become. For $5.00, you can do no wrong in picking up such a unique, funny game from Iridium Studios’ first outing. The music is fantastic, but the length of some conversations can wear on you and the meme references get in the way of being it’s own thing.