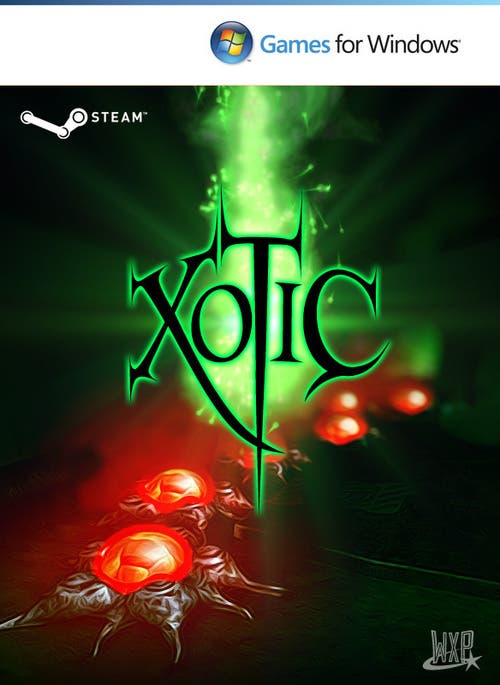 Xotic was a game that came out late last year that I didn’t know much about. It went on sale during Christmas/New Year’s for both XBLA and on Steam. Xotic is an indie game, developed and published by a handful of guys who have a unique vision. YouTube is filled to the brim with mostly early PC games like Doom and Quake and even Half-Life of people exploiting each and every nook and cranny of a level to maximize the fastest time to speedrun the game. What if there was a game deliberately built for speedruns? Xotic is that game.

Editor’s Note: This review is after the most recent patch: 2.4 on PC, and not an initial release review.

This is not your run-in-the-mill first person shooter. Xotic is a fast-paced, precise, score driven, adrenaline-infused game where maintaining a combo and prioritizing targets to get the best score is key to success. Each level you can earn up to five stars based on time, combos, score, objectives, and accuracy. The game isn’t clear on what you need to do for that level to get the star, but not meeting that goal is a disappointment, but also gives you incentive to go back and try and beat your own score. Or if that isn’t motivation enough, seeing a friend on the leaderboards score higher. It’s a constant drive to want to do better, even if you feel you’re not good.

Your character is quite the odd looking creature, a decrepit-looking alien wielding an organic gun that is reminiscent of Half-Life’s Xen levels near the end and weapons you come to use. Though you only see yourself as the camera swings around before you take control, you certainly don’t look like you’d do well in these arenas. The backstory is convoluted, but not necessary for what the gameplay actually is. And by this moment I’ve forgotten what the story is about. You will fight a small number of enemies in each level, but the enemies you do encounter look similar to you and are willing to take you out at any cost and should not be underestimated.

Xotic spans over 4 different areas, each level with it’s own feel. Currently, the game shows off 4 more locations that are “Coming Soon” and it isn’t clear whether it’ll be free or paid DLC, but more content is certainly welcome. At the beginning of each level I found myself wasting time just to walk a level and strategize what I need to do, then restart the level and test out my strategy. More often than not I succeeded in getting at least 4 stars, but mostly received 5 stars. While that’s all well and good, my scores didn’t place me high on my friends leaderboard or the world leaderboard. The game humbles you quite often, and gives you that push to do better. Scores can be increased by increasing the difficulty. If you ratchet up to Hard, your multiplier is permanently set to x3 and will instantly get a better score should you beat the level.

Unfortunately your characteristics are not static, you will be able to unlock upgrades as you progress through the game by earning experience at each level’s completion. Upgrading does not become overpowered or imbalanced, but just allows you to do get better scores and be more efficient in levels. The game will quickly bring you down to reality if you start to feel God-like breezing through the levels, though. Upgrades include better health, more energy, or adding new power modes to your existing gun to then help overcome the odds.

This is a very colorful game, but the enemies and other structures you encounter can look bad up close, but it’s certainly up to standards for today’s gaming and maintains a high frame rate that you can’t complain about.

Xotic lives up to the name, by being exotic, unique, and different in all the right ways. It’s got nearly infinite replayability as long as you want to be competitive.