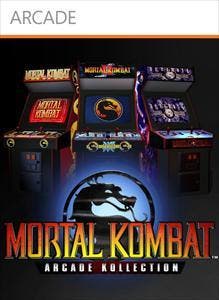 When Mortal Kombat Arcade Kollection was originally released for Xbox Live Arcade and PlayStation Network it was plagued with several issues: music & sound bugs, a cropped screen, and online play that barely worked were just some of the issues. And it unfortunately took until mid-December for a patch to finally arrive to fix the most egregious issues. I refused to review the game at all up to that point just because it was so broken that it would have received a 1 Star rating at best at the time. But now with the release of the Mortal Kombat Arcade Kollection on Steam, I revisited the title on all platforms once again, and was much more satisfied with what I saw.

Each game seems to be a close to accurate emulation of their respective arcade versions. However there are some differences. Some of the original arcade sound effects have been replaced with cleaner/crisper sounding sound effects. Unfortunately this results in some of the effects sounding out of place. There are also some music glitches. The biggest one being that there is no music played in Mortal Kombat 1 when fighting Endurance Round 3, the fight that occurs before facing Goro. I’ve tested this in both the XBLA and PC versions and they both have this problem. However, some of the MK2 related music glitches (gaps in the music between transition points) that still exist in the console versions have been fixed in the PC version. There also was an audio glitch with Scorpion’s “Get Over Here” audio in UMK3 in the original XBLA and PSN release but that has since been patched. Funny enough, that audio glitch existed in the original Arcade version of UMK3, but was fixed in the 2006 port of UMK3 to XBLA. The music levels across all 3 games is different (MK2’s music volume is a little low, and UMK3’s is even lower), however all games are tied to the same volume slider, so you’ll either need to find the sweet spot that works for all the games or constantly adjust the settings depending on what game you’re playing if you care about hearing the audio in its best form.

V-sync is a small issue with the Console versions of the game. It seems as though post-patch, the tearing is not nearly as bad, but I haven’t compared both versions back and forth. The PC version doesn’t seem to encounter any V-sync issues though. And there’s also a small issue with pulling up the pause menu during a match— unpausing usually will cause your inputs to not be recognized for a second which not only leaves you open to attack, but also makes the Moves List feature worthless for checking out fatalities since the timing to pull off a fatality in any of these games is too tight to waste a second or two. And you can’t bring up the Moves List between rounds either— for whatever reason (my guess is that its related to the way they are hooking into the emulation to find out which character you’ve chosen), the option is disabled until the match starts.

You can play as Player 1 in any of the games using the Keyboard, a Gamepad, or even an Arcade Stick (I was able to successfully use the PDP MK Klassic Fight Stick without having to make any configuration changes). However, the only way to play as Player 2 is to have a second Gamepad/Stick connected to your PC. Unfortunately the first Gamepad/Stick is locked to Player 1.

Online is now extremely playable and is on par with the post-patch online code in MK9. Its not perfect and there can still be a little bit of lag but most of the time I was able to get good games going. The PC version does use Games For Windows Live (including the Steam version). Note that Games For Windows Live has been free for the last few years, so you will not have to pay extra to play online. The PC and Xbox 360 versions have a handy feature called “Quick Match” will try to look for an available unranked online game for either MK1, MK2 or UMK3. It’s a nice feature, but I do wish the ability to Randomize which game you were playing in Ranked mode as well. Unfortunately, in the absence of that, most people seem to gravitate towards playing UMK3 even though I personally think MK2 is just as good if not better than UMK3.

There is one big downside to the Online play at this point though— there are not enough players on XBLA and PC. The botched launch on PSN & XBLA whittled down that player base pretty quickly. And the PC version came out on Steam with little fanfare and several months after the PSN/XBLA versions were out and the online player base is not very big (there were around 1500 players on the UMK3 PC leaderboards last I checked). Currently I can still find online games, but sometimes it takes several minutes, and sometimes I can’t find an online game using the MK game I want to play. As I stated earlier, UMK3 is the most popular game, so UMK3 seems to be the easiest to find games for. The PSN version has consistently been on the top selling PSN game charts so the online base is a little stronger than on XBLA and PC. If you like the persistence of your online ranking, don’t get the PC version of this game. The PC leaderboards were hacked only a few days after the game came out, and I saw a few players with impossibly high rankings on the leaderboards. Since then, some of the leaderboards have been cleaned up, but don’t get the PC version expecting that the leaderboards will be pure.

There are a few things that could be better with this release. An arcade request mode which lets you play the AI while trying to matchmake you against players depending on your search criteria could probably really help the game given the smaller player base of the game. There’s also no party/spectator mode in online. The 2006 UMK3 XBLA port as well as MK9 have this feature so it’s a little disappointing knowing that it was totally possible for them to put that feature in. There’s also no way to do a custom stretch of the screen. You’re either stuck with a 4:3 aspect ratio with some small black bars on the top and bottom of the screen, or a 16:9 image which fills the image. A custom stretch option could get a bigger image on the screen without stretching it too far that everything looks too fat. There are also quite a few filter options but many of the filters aren’t as good as they could be. Scanlines are uneven in 4:3 mode, and I’ve seen better implementations of Scanlines which look much nicer on an HDTV.

Ultimately, this collection is still awesome to have and I like that 18 years after falling in love with the game and the series I can still play it competitively. If this collection is taken as a bare bones online port rather than trying to compare it to a well-crafted remaster like Street Fighter 3: 3rd Strike Online Edition, it should be seen as a fantastic package at a great price.