Ubisoft announced that Mad Riders, an adrenaline-fueled off-road arcade racing game, is coming to Xbox LIVE Arcade for the Xbox 360 video game and entertainment system from Microsoft, PlayStation Network and PC this spring. Game looks terrific, with it’s cel shading and hard lines – it’s going to be a very pretty game to be sure. Though under a different publisher it sure looks like it is a spiritual successor their prior game, Nail’d.

Mad Riders, developed by Techland, will see players performing amazing aerial stunts and racing at breathtaking speeds on over 45 stunning tracks from all over the world. To gain the edge on the competition, players will need to use their Boost skill wisely and take advantage of shortcuts hidden in the tracks.

For players who want to take the experience online, Mad Riders has extensive competitive features and leaderboards, allowing players to test their skills against the rest of the world. Thanks to an intuitive drop-in system, players can compete in three exciting multiplayer modes playable up to 12 players. 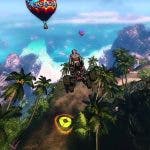