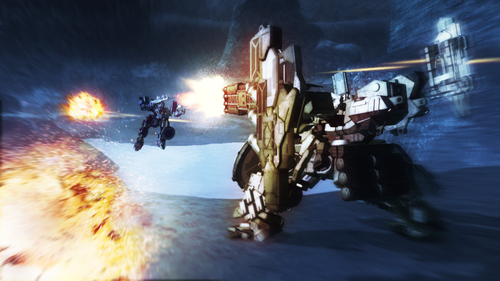 The Corporation run by a dictator known as “Father” has taken over. The Revolution is mounting attacks to take The City back and pure manpower alone won’t accomplish this task, as big mechanical robots with immense firepower are the key to winning. This is the third Armored Core on current generation of consoles, the fifth main entry in the series, and the fourteenth game overall.

Fans of the series will notice that the speed at which Armored Core games have played has been greatly reduced. Fear not, as thrusters and being highly maneuverable are still at the forefront here. It is also equally important to take cover behind buildings to be covert and stealthy when possible to acoid taking unnecessary damage. It’s best if you switch to the new “Scan Mode” with the click of the right stick, where you can’t fire your weapons but can scan for enemies or deploy recon units that can reveal enemies in the area. There are no more prolonged high flying sequences, as you are predominately earth-bound. You’ll be able to climb buildings for high-altitude attacks to catch an enemy off guard or destroy a mounted sniper mech that’s been taking pot shots at you across the map. You can even consume large amounts of energy to perform thruster jumps that will keep you in the air for a short time. Controlling these massive beasts is nearly effortless as you always feel in control of what you’re doing and where you’re going. The mistakes that get you killed are of your own volition and no one else’s.

Comparisons will and should be drawn to Chromehounds – a prior From Software simulation mech adventure, only found on the Xbox 360. Customization has always been instrumental in your success or failure in Armored Core, and here is no different. Building your mech could easily take an hour to get it the way you like. Whether it’s designing a custom emblem, choosing the right colors and pattern options, or buying and setting parts that don’t overload the mech – there’s a way to put your signature on it. Chromehounds had a story, but was basically a tutorial for the main mode of the game – Online. Armored Core V takes a page from that book and introduces a online-driven game where you and friends and strangers can join and create teams to take on other online teams to battle for territorial control. Lastly, you can join a Free Battle and played Ranked or Unranked games to simply have a battle arena to blow-up mechs.

With that, the menu system “logs you on” to the network in which you can immediately chat with teammates and effortlessly choose between online and offline missions. Missions are all referred to as “Sorties” which by definition means to attack from a defensive position. Story sorties are as bland as they come and often are multi-tiered to which the experience is hindered by extended missions that feel they should have ended a while ago. There is no saving mid-mission, so plan accordingly. Thankfully there are checkpoints at select locations, but are sparse. When a mission is completed you’re given a letter grade ‘E’ through ‘S’ that will also give you credits to buy more parts to outfit your mech to make it faster and stronger. The other main mission type for offline play is “Order” which are short, varied affairs that almost always take less than 5 minutes to complete, a stark contrast to that of the story. Objectives are simple, kill all enemies, destroy all enemies under a certain time, or fight a 1-on-1 mech battle. Here I found this to be the most fun even as many of the missions were similar, but never felt like a chore or overstayed its welcome. With them being so short, it’s understandable there are 83 of them.

The graphical style has improved from the prior games as there’s more color and texture, but a lot of it is muddy looking with grainy camera and oversaturated hues. It actually hurt my eyes during the day, but tolerable at night. Sound design is what you’d expect, deep bass for stomping around, a rush of noise from engaging thrusters, a hailstorm of gunfire and shrieking alarm noises that will get stuck in your head long after you’ve turned it off.

It seems with Armored Core V, there was a lot of attention paid to what fans wanted in a true sequel for the franchise – and the answer was something that went back to its roots, but was approachable by newcomers. I think that gets achieved here. It’s overwhelming at first, but once you parse all the data being thrown at you you’ll find a deep, slightly messy, and engaging game with a lot of replayability for years to come.