PC shooter fans looking for a new twist on online multiplayer games are certain to find it this summer in Mercenary Ops. The new title combines the best of the tactical gameplay elements from conventional third-person shooters with the fast-paced competitive and cooperative team matches found in online multiplayer titles – and adds to the mix a deeper layer of character development and customization.

“In a third-person shooter, the online multiplayer aspect of the game always seems to be an after-thought to the single-player experience,” said Mercenary Ops Producer, Jason Sharp. “Because of this, we decided to concentrate on creating an entirely different online experience by looking at every facet of game design from that perspective. This decision resulted in a unique style of play that enhanced traditional tactical combat by requiring players to have a quicker, more aggressive attitude.”

Like other third-person shooters, Mercenary Ops implements cover-based mechanics and an active reload system as the foundation of the game’s design. Along with these familiar gameplay elements, the developers added the precise control and aiming abilities found only on the PC. In addition, the game was enhanced by adding destructible cover, an encumbrance system and maps designed with multiple threat vectors to shake up the stop-and-pop gameplay often found in third-person shooters.

Combat in Mercenary Ops puts an equal emphasis on both competitive play and team-based cooperative missions. In competitive multiplayer, up to 16 players can faceoff in five different, intense game modes, while in co-op, teams of 3 – 8 players take on hordes of AI controlled enemies and mini-bosses in a fight for survival.

Apart from the dynamic combat features, Mercenary Ops features an array of customization and advancement options. Players gain experience from killing enemies and completing difficult mission objectives, allowing for more opportunities to access weapon and equipment upgrades; some of which can only be obtained in select game modes.

Mercenary Ops was created using the Unreal Engine 3. The engine was selected for its cutting-edge graphics, multi-core processor support, optimization for the PC and massive world support.

Mercenary Ops will launch exclusively for the PC in Summer 2012. More information can be found at www.mercenaryopsgame.com. 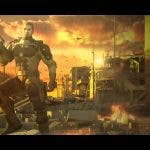