Avengers: Battle for Earth on Kinect and Wii U

Battle against the forces of evil in this new Marvel adventure starring over 20 Marvel super heroes and villains, including Captain America, Thor, The Hulk and Magneto. Based on the ‘Secret Invasion’ storyline, ‘Battle for Earth’s’ interactive environments are inspired by iconic Marvel comic artwork and backdrops. Experience a variety of game modes by using the Wii U GamePad and full body on Kinect to execute explosive super attacks, unleash devastating special moves and battle friends or against the AI. 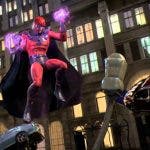 avengers battle for earth on kin