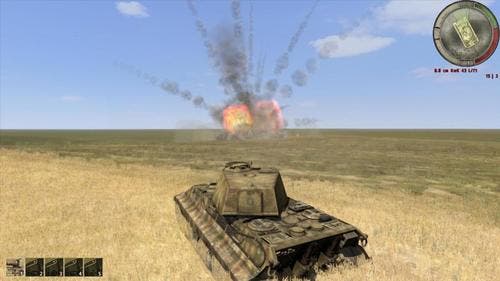 Developers X1 Software and AWAR brought back World War II in spectacular fashion by using the ArmA II engine as their mod turned retail product. Everything from the controls to the graphics is what you would feel if you played ArmA II. However, the detailed and highly inaccurate weapons of the 1940’s and vehicles clearly make it something else.

I have some bad news, much like the engine’s forebearer – this game crashes A LOT. It either crashes to desktop or develops and unknown error. I had to install the game twice to get it running somewhat stable. That isn’t to speak to the game’s quality so much, as ArmA II was well known for it’s crashes. So here the problem carries on. This can be a huge turn-off to a gamer who has plunked down $30 to play a game, not troubleshoot it.

Though, there’s also more good than bad news, the realistic approach that ArmA takes plus the authentic World War II weapons and vehicles finds a sweet spot in this game. With the graphics maxed out, you can see beautiful recreations of locations, vehicles, and weapons in stunning detail that no “mod” could provide. The only drawback in the realism or authenticity is the abilities your character provides. You might think you are just a foot soldier out to kill the German or Russian armies, you are actually a one-man army capable of driving any vehicle, shooting any weapon, and flying any plane. Now, capability and actual skill get quite far apart as I found myself crashing planes so often that I’m pretty sure I collapsed either side of the economy in an hour.

Single Player covers both German and Russian campaigns. Now, when I say campaign, I mean a loosely linear string of missions. Though the campaigns are quite lengthy, about 6 hours each on the lowest difficulty (this game is hard, okay?). Narrative is light, as most of the game uses broken up words to compile sentences. The game’s plodding pace both in story and gameplay is how it’s meant to be, not a pacing issue with the developer. This is not Call of Duty 2 or Battlefield 1942. It’s leans heavily on tactics as ArmA II does. It requires you use your wits and outsmart the enemy. This means not sprinting in brushes where you can be seen, or in 1 or 2 shots – you’re dead. You must crawl through brush to avoid being seen, and flanking the enemy to get the drop. That’s not so easy in vehicles, but the pure firepower you have should be more than sufficient if you’re careful.

There’s a robust Editor just like ArmA II’s. Don’t like what the game offers and you can make something new and exciting. You probably won’t be able to make better than what the developers created, as it is a historical recreation of World War II backdrops. Multiplayer offers a great experience as huge battles take place with infantry and vehicles alike. Though the unfortunate bugs and crashes interfere with the fun.

Iron Front: Liberation 1944 is a fantastic, authentic take on the realism that was World War II, but the bugs, crashes, and slow pace in the singleplayer are huge deterrants for anyone. After deploying an early patch, the game still had its issues. Maybe over time it will get resolved, but in its current state I cannot recommend this game without a healthy dose of warnings. But if you can get past all of that, you’ll find an engaging simulator that has a lot of life in it’s editor and multiplayer that has a growing community and plenty of servers available.