Set on the breathtaking planetoid Taurus, Carrier Command: Gaea Mission offers a refreshing combination of vehicular combat action with real-time strategic elements. In the game, players take up the role of Lt Myrik, a battle-hardened soldier of the United Earth Coalition who has been deployed on a mission to defeat Asian Pacific Alliance forces in an area called the Dead Zone. In command of an armed vehicle carrier, players will traverse the seas to engage in free-roaming combat and establish a strategic network of island bases for mining, manufacturing and defense. The game includes the main Gaea Mission campaign, which also features on-foot FPS missions, and a mode similar to the original Carrier Command, called Strategy Game. 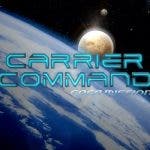 Carrier Command: Gaea Mission will ship for both Windows PC and Xbox 360 on 28 September in Europe and 2 October in North America.