Today, Ubisoft announced that Trials Evolution – Origin of Pain, the first downloadable content (DLC) for Trials Evolution, will be available for download on October 5 for 400 Microsoft Points.

The Origin of Pain DLC gives gamers what they want, starting with 36 brand new tracks fresh from RedLynx, and continuing with an all-new BMX bike mode, the first time a bike mode has ever been offered in a Trials game. There are also new skill games, rider gear and in-world objects. One of the highest-rated and fastest-selling XBLA games of all time, Trials Evolution features multiplayer madness, single player challenge, and user-generated content for almost endless gaming possibilities.

To date, more than 160,000 Player-created tracks have been uploaded to Track Central, which have been downloaded more than 27 million times. Origin of Pain will only add to the possibilities of what players can build with the game, adding 100 new editor objects for use in player-made levels. 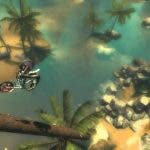 Developed by RedLynx, an Ubisoft studio, and published by Microsoft Game Studios, Trials Evolution is available on the Xbox Live Marketplace for 1200 Microsoft Points.