Green Arrow Confirmed to be in Injustice: Gods Among Us

Visitors to this year’s New York Comic Con taking place at the Javits Center in New York City October 11-14 will be able to get their hands on with the game and play the Green Arrow by visiting the DC Entertainment booth (#1238) at the show. 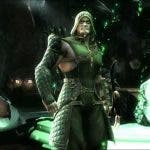 green arrow confirmed to be in i