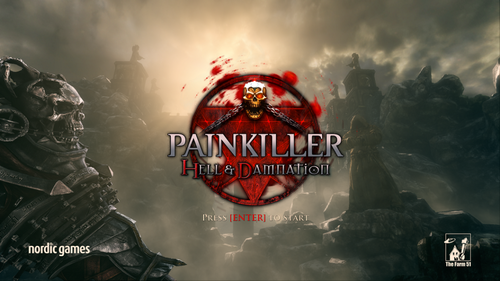 Samurai demons, check. Baby skeletons, check. Burned and charred workers, check. Huge muscular monks with axes, check. It all sounds like Painkiller to me. Rather than a quick cash-in expansion, this recreation asks you to pulverize, torture, and above all odds, defeat the demonic hordes by driving wooden stakes deep into chests as you listen to blisteringly fast and loud metal. Who’s in?

The Painkiller series has mostly derailed over the years as it has reached five expansions, each with diminishing returns. Painkiller: Hell & Damnation (or cleverly shortened to Painkiller HD) is a remake of the original game and first expansion, which only came out in 2004. The game existed in a standard definition era, using the in-house PainEngine to deliver it’s blazingly fast gameplay and stunning visuals for its time. The team at The Farm 51 have painstakingly recreated the game with Unreal Engine 3 and achieving 60+ fps and looking a ton better.

The storyline follows Daniel (voiced by Jon St. Jon aka Duke Nukem) and his wife Catherine who were killed in a car accident in the dead of night with a thunderstorm raging. Daniel’s wife is being held from ascending to heaven from Death until he collects 6,666 souls, defeat 4 Generals, and then Catherine will be let go. You will quickly forget the incidental story as I did, because simply it isn’t that reliant on the narrative other than to serve the purpose of handing you an arsenal’s worth of death dealing weapons that will carve, cut, sever, and otherwise mutilate your enemies into pulp.

The forever badass stakegun returns in HD glory as it’s high-intensity and slow fire-rate deliver a powerful blow that will pin anyone to a wall. Other weapons fall into medieval torture category while following basic gun archetypes such as rocket launchers, machine guns, grenade launchers, and even a melee weapon. Each weapon has it’s own alt-fire such as shooting electricity, raising the dead, or slowing enemies. That ammo is a rare find, but well worth expending into your foes. There is even a weapon called the Painkiller, the primary fire delivers pain by slicing and the alt-fire providing pain as the top part sticks to a surface and links a laser back to the other half, great for getting kills through a doorway. New to the Painkiller series is the Soulcatcher, when combo fired, will raise the fallen enemies to fight on your side for a short time – the primary fire shoots a devastating sawblade.

Painkiller: Hell & Damnation is challenging on the middle-of-the-road difficulty, and that’s how it should be. Relying on old videogame tactics of circle-strafing, maintaining a health bar while trying to minimize damage, and making it to the end of a level with only 5 health – all of which is a triumphant experience. The bosses of the game are massive creatures the size of skyscrapers. They require massive amounts of firepower and quick reflexes to defeat, but are thrilling as you have to manage foot soldiers, projectiles, boss damage, and your own health all at the same time.

The music may not be for everyone, but there is no better fit than the relentless metal that accompanies your death-dealing destruction through each level. A good rule of thumb of knowing if you’ve taken too long in a level? The music loops, then you know you’ve gone beyond par for the level. You might as well start over…

Multiplayer expands greatly in Painkiller HD. You can now go through the game’s levels with a co-op partner which scales to the increased player count. Perhaps you want to do a Survival mode, which is fine in theory but becomes tiresome if you are really good at it. There is the option to go head-to-head with other Painkillers in Team Deathmatch, Deathmatch, and Capture the Flag. Each mode is generic, but really enjoyable as the super fast movement creates hectic, explosion-filled matches. I favor the Co-Op experience for the increased challenge and enhanced social experience you can have going through the game.

Painkiller is largely the same game, by design. It’s missing some levels that were likely cut for being dull or repetitive, but the ones remaining are designed beautifully while maintaining the gore and horror-themed nature of the original without disrupting the flow. It’s pretty easy to recommend Painkiller Hell & Damnation over all other versions and packs. It has everything you liked about the original but now with enhanced graphics, speed, multiplayer modes you want to play, a killer soundtrack, and a bodycount that’ll reach into quadruple digits.