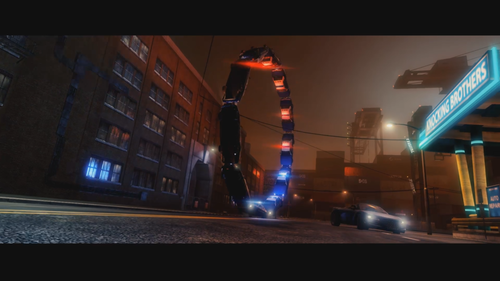 Need For Speed: Most Wanted Review

Criterion’s second outing as a developer of a Need For Speed title, is an interesting one. This is a reboot of the 2005 game, Most Wanted – that in it of itself is a strange proposition. It turns out that this game is mostly what I wanted, not exactly what I wanted most.

Need For Speed: Most Wanted seems to have a bit of an identity crisis. While the look and name of the game is Need For Speed, the gameplay and structure is everything Burnout, mostly Paradise. While this may seem like the perfect marriage of franchises, it’s not. The feel is off and it is always conflicting with itself. It seems mostly due to a distinct lack of personality. There’s no story or characters to associate yourself with, because Criterion “doesn’t do narrative” – but it hurts the game’s namesake as a result. The intro to the game is short and introduces you to the Top 10 Most Wanted, defeat all of them to become the #1 Most Wanted driver in Fairhaven. It’s simple enough, but while driving through the city, there are AI civilian cars and cops roaming around, but it all feels lifeless as a whole.

Through races and cop chases, you’ll earn Speed Points (SP), essentially XP. Collecting enough points will allow you to challenge each member of the Most Wanted. Defeat them, you take their place, move up. In Burnout Paradise fashion, in order to keep the car of the “boss” you’ve defeated, you must chase and takedown – essentially destroy the losing car in order to add it to your collection. The cars to the game are unlocked from the get-go, the catch is that you must find all the cars in order to have access to them, called Jack Spots. Some cars will have multiple locations. Oddly, swapping cars only transports you to a car’s location. If you needed a car for a specific race, now you need to drive all the way back to it. Though, in multiplayer it’s an instantaneous swap at the current location.

Most Wanted smartly removes the need for navigating menus, garages, and other out of game areas by making EasyDrive, a way of starting races, swapping cars, customizing cars, and diving into multiplayer via the D-Pad (or with your voice using Kinect for Xbox 360). This is similar to Burnout Paradise but much improved, as they’ve learned a lot since that game. EasyDrive works really well, but the idea of customizing your vehicle while racing is cumbersome. Situations that would require this are going from road surface to off-road surfaces would be worth hot-swapping tires for better traction. Or perhaps your lightweight racer has attracted a lot of the SUV barricades and you can reinforce your chassis for a heavier, devastating hit to blow through it. I never really found myself doing it often because I’d hit a wall or do something unintended and do more harm than just leaving it as is.

The big draw is the cop chases. Most races are scripted to trigger the police and you’ll have this duality of trying to still place first in a race and keep the cops at bay. Cops are merciless and with heats increasing up to Level 6, SWAT vehicles will do anything to stop you. Should you try to run into them, you’ll stop dead and likely be surrounded for a quick bust. If you manage to get into a Cooldown, you can wait anywhere as long as you are out-of-sight or can use a Repair Shop to fix your car and repaint it which will drop the cops immediately. Alternatively, in a Cooldown, you can turn off your car with the click-in of the left stick, this will increase the speed of the Cooldown. Most races reward quickness in losing the cops, but I found that it’s incredibly exciting to move up the Heat Level and try to lose the cops, as there’s a huge Speedpoint bonus for doing so. If you get Busted, all that bonus SP is lost. The police overall, can be annoying when all you may want to do is race, find billboards to smash, discover the cars scattered in the world, knocking down gates, or flying past speed traps to beat your friends. There’s no way to Speed without getting some unwanted attention.

As you traverse the open world of Fairhaven, you’ll come across cars in their Jack Spots and as you get into each vehicle, they have their own races. Now if cars are similar to each other in performance, you’ll see overlap in the races you partake in. Each car you find has no Car Mods installed, you have to race to unlock mods. The first race you complete gets you Nitrous and Off-Road Tires, it’s best you do that race first with every car as Nitrous is essential. You’ll experience déjà vu as each and every car you have to unlock the same mods, over and over again. It’s an exercise in frustration. The races themselves are fun and exciting, but the end goal of unlocking the same mod you have on a different car is tedious and disappointing.

Most Wanted’s HUD is so cluttered with popups, scrolling text, maps, and other information it’s like having your TV turned to MSNBC. The game is visually stunning, but among the HUD clutter is the specks of dust and grime that get all over the camera or when looking into the sun, it reduces your sight and often causes you to crash. It all gives the world a dirty and grimy look. It’s unfortunate, because there’s incredible of detail with car models and with road texture being hidden from a better view. When you turn up all the options with a PC though, you’ve got a visual delight with 60fps that will have you stopping to enjoy the sights. Audibly, the game’s soundtrack is  well-done and featuring one my favorites, “Galvanize”. The exaggerated engine noises are aggressive and worth cranking up the audio for.

The entire game is a social experiment that centers around the Autolog, where everything you do is a leaderboard and has an action that a friend can compete against. Criterion first introduced Autolog with 2010’s Hot Pursuit and EA has used it in other versions of Need For Speed. Autolog creates a great sense of competition between you and your friends to achieve better times in races, better speeds through speed traps, and even who’s found the most cars at Jack Spots.

What Criterion and Most Wanted excel at, is the multiplayer. It’s phenomenal, dynamic, and hectic. Using Easy Drive, you’ll be instantly transported into a game with people and a random setlist that will roll out automatically. Everyone will have to speed to the Meet Up spot – which is a race in it of itself as you’ll be awarded bonus SP for arriving first. Then the playlist will start, randomizing events such as Race, Challenge, or Speedtest. When it begins, it does so unofficially that if you’re not paying attention, you will already be losing. You’ll find either people working together or against each other, like during Challenges or Speedtests. If you are in first place, you can turn around and takeout other players to eliminate them and lock them out of scoring any higher – securing your victory. Races are no holds barred as well, as you can still takedown fellow racers in whatever it takes to win.

There’s a huge disconnected between the Multiplayer and Singleplayer, each has their own progression system of the Speedpoint system and car mods are not shared. All cars are available online too, but you’ll have to re-earn mods here as well. Certain events will require certain cars and does a great job of showing you what is qualified for that race. Though, you can go online and take out billboards and smash gates – that is shared across the singleplayer and multiplayer. Whatever you choose to do, the Multiplayer is absolutely amazing, providing more thrills than the singleplayer side could possibly ever offer. The downside, is that online doesn’t feature police chases, which is sorely missing.

The sheer number of things to do online and off is staggering. Unfortunately the focus seems to be on the multiplayer and while it is easily the best feature – the singleplayer is severely lacking in a game that revolves around an open world and cops. And when the online multiplayer doesn’t feature cops, playable or not – it doesn’t feel like the same game. Most Wanted feels a little more worth it than the score because of the well done multiplayer, but if you were coming to this Need For Speed for a great, involving singleplayer, you’ll be sorely disappointed.