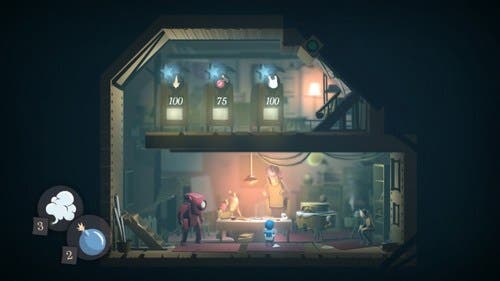 There’s a lot going for Pid but unfortunately, it’s not enough to overcome its frustrations. It’s the story of a little boy, far from home, stranded in an unfamiliar world inhabited by kind hearted robots and vicious machines.

The boy uses a beam of light to help him traverse the world. This is thanks to the beams ability to move him, and enemies, around the level. If you’ve played Portal 2, you will be familiar how these work as they resemble the light tunnels. In a nutshell, they push you in the direction the tunnel is shooting, defying gravity. The puzzles in Pid are plentiful and the variety is admirable, using the beams to float you over life ending pits, moving bombs to a desired location, or help you reach platforms you would never get to with jumping.

The game uses the beams pretty effectively with puzzles that require you to think of the best possible way to get around obstacles. To aid you in this endeavor, they throw in some tools for you to use like bombs. Use the bombs and your beams together and you can rid yourself of enemies in different ways. But unfortunetly, yes there are enemies who are immune to the beam’s effects creating even more tasking challenges. Along the way you collect stars that you find in constellation form and keep a running tally in the bottom corner. It’s these stars that become your currency for little vending machines you find scattered across the world. Most of the time you find them right before a key area where the game knows you may need a specific item. You can purchase more tools or even a shield in these devices and you’re on you merry way.

The actual game was enjoyable but got very frustrating at points and if you know me that is my one biggest gripe in gaming; the difficulty to frustration ratio. The game isn’t inherently difficult but the games boss battles becoming stupidly frustrating; enough to the point where you die over and over and for me, that isn’t fun. I’m sure there are people out there who like to torture themselves like that but not me. That right there killed a lot of the game for me. I would end up dying because of wrong timing on my part or just some random scenario in battle that I couldn’t avoid. Over and over like that for what seemed like minutes on end. Eventually I would give up out of pure anger and come back to it later only to find myself get even more infuriated. By this point, I was pretty sure where I stood with this game.

Pid has lots of levels, It has co-op, it’s a beautiful dream inspired world, and it has a wonderfully done soundtrack. But none of its positives could save the game for me in the end.