Dark Vale Games, an independent video game developer based in Southern California, has released FORGE, a multiplayer-only PC game set in a high-action fantasy world, through online retailers.  Offering five devastating classes, a persistent skill modification and character customization system, high-speed combat, and an arsenal of devastating spells and attacks, FORGE delivers the speed and precision of shooter frag-fests mated with the strategy and skills of MMO PvP arenas.

FORGE is now available in a two-for-one deal for $19.99 (USD) via Valve’s Steam service, Amazon.com and GamersGate, as well as directly from Dark Vale Games’ web site at www.PlayForgeWar.com.  Every purchase of the game comes with a second copy of FORGE free-of-charge which can be given to friends and clan-mates this holiday season.

“Together Dark Vale Games, SuperGenius and Digital Confectioners have collaborated to create a game, in FORGE, that we all envisioned, a game that big publishers simply aren’t willing to take a risk on anymore – a new game in a new genre with totally new gameplay,” said Tim Alvis, COO/CTO of Dark Vale Games.  “We firmly believe that FORGE will provide PC gamers, who are hungry for a new experience, with a refreshing change of pace, a game that is welcoming to new players while remaining deep enough to please the PvPers from EQ  and GW along with the grizzled veterans of TF2, CS, and UT.” 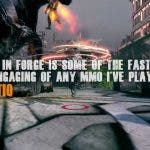