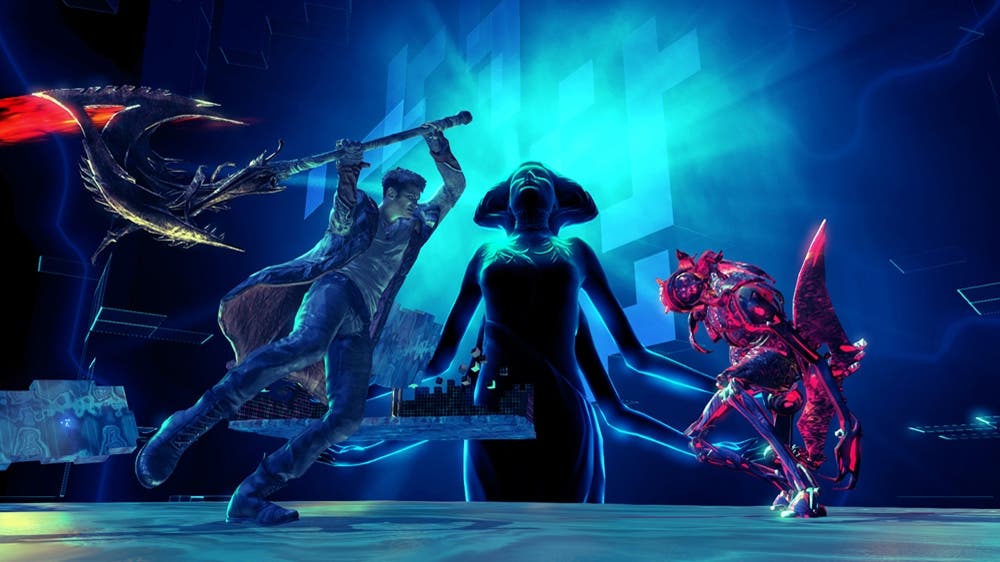 Ninja Theory’s reboot of the Devil May Cry franchise has been surrounded by controversy. Many fans of the previous four games have been crying out in protest over Ninja Theory’s handling of this reboot. From the radical tonal shift, to the color of Dante’s hair; there’s nothing these fans won’t complain about. I’m here to tell them that they’re dead wrong. DmC: Devil May Cry isn’t just an outstanding Devil May Cry game, it’s an outstanding game PERIOD.

You play as Dante, the veiled sole survivor of his family. As half-demon / half-angel offspring, Dante has the ability to see and react the world hidden within the real world. This world is known as Limbo and it’s a twisted reflection of the “real” world. It’s here where the all of the actual gameplay takes place, and it is this place where some of the most radical (and beautiful) game design unfolds. Using various combinations of demonic, angelic and neutral weapons, Dante is able to take down any enemy thrown his way. Add on top of that the deepest, most satisfying combat Ninja Theory has ever produced and DmC play just as good as it looks.

From the grimy grossness of an apparently menial soda factory, to the throbbing lights and sounds of a demonic dance club, DmC has visual style out the wazoo. I’d really like to describe more of the set pieces in the game, but you really just need to see it for yourself. Visually, DmC is one of the prettiest Unreal powered games I’ve ever seen. Highly saturated and colorful, the game just oozes graphics. Really really gorgeous graphics. Since I was playing the Xbox 360 version, there were a few framerate issues here and there, but it’s games like DmC that continue to amaze me at just how powerful this aging generation of consoles truly are. In addition to the beautiful visuals, Ninja Theory has done their usual fantastic job of using motion capture on all of the cutscenes and animations. Using real actors to not only voice but alsoact as the characters is a trend that DmC puts to fantastic use, and one that I hope more game developers pick up on.

Aurally, DmC really stands out. Using a mixture of club, techno, dubstep and hardcore music, DmC not only sounds awesome (if only slightly weird) it also sets a fantastic tone throughout the game. Featuring fantastic performances throughout, DmC does something that a lot of games try to do but few succeed at. DmC is actually pretty damn funny. Multiple times I found myself not just laughing at Dante cracking wise, but also at the pure ridiculousness of the many characters you cross paths with. Through and through, DmC is a wholly rewarding experience. Listen, I’ve talked at length about this game, and if you were on the fence about picking it up, don’t be. If you were a fan of the previous games in the series, but were skeptical about the direction this new game was taking, don’t. Buy DmC. The fantastic combat, graphics, writing, acting and audio of this game need to be experienced. All too often great games are overlooked because a single issue rubbed someone the wrong way. Ninja Theory has crafted a game at the head of it’s class/genre, whatever, that is truly deserving of the Devil May Cry name and your money.