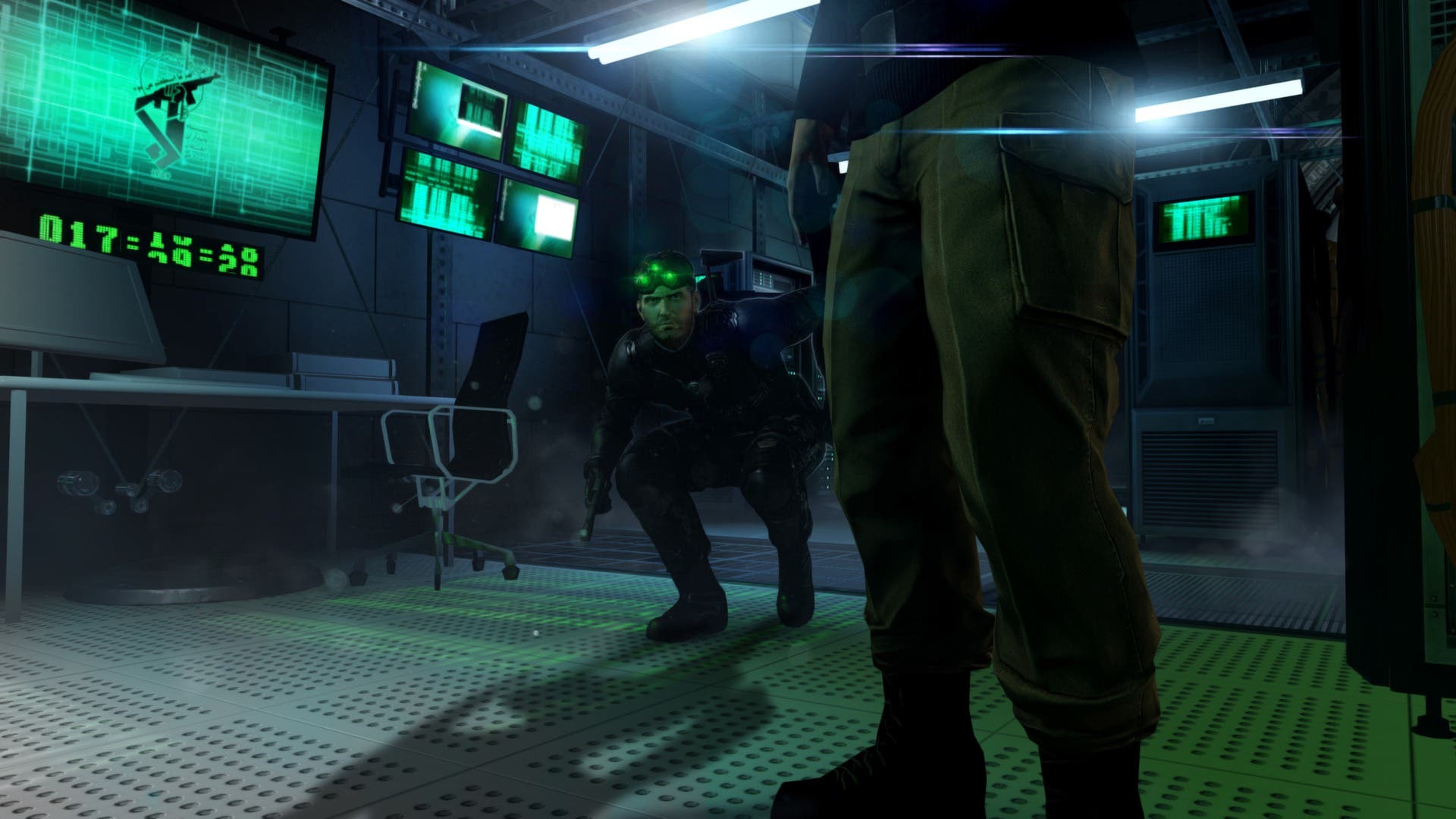 The Engineers, as they call themselves, have made an egregious threat on America, stating that if the United States doesn’t pull out all of their forces from foreign countries, they will initiate attacks on several cities within the country as retaliation for not heeding the warning. Now, Sam and crew must work to finding The Engineers and stopping them before too much damage is done. A plausible story that is serviceable from beginning to end, and fits in the confines of something Tom Clancy would write.

The Fourth Echelon has been established, after the Third Echelon was disbanded following the events of Double Agent and Conviction. Now establishing their base on an always-flying aircraft known as Paladin. It is here that everything takes place: single player, co-op, multiplayer, challenges, etc. Rather than a menu, the Paladin serves as a neat interactive menu that you can walk through, a hub location seen in other games. It takes a bit to get used to, but provides immersion on a whole new level.

If you’ve been a fan of the series, Blacklist plays like a mash-up of the past games all in one, creating a “greatest hits” feel. The game closely resembles Chaos Theory overall, with dashes of Conviction here and there. As a veteran of the series, I can say that playing on Professional or Perfectionist (highest) difficulty is recommended. Those who didn’t appreciate the “Mark & Execute” feature can see it completely be removed on the highest difficulty for the greatest challenge, and biggest internal reward.

Splinter Cell Blacklist is a bit more forgiving this time around, similar to recent games like Dishonored or Mark of the Ninja, where sounding an alarm doesn’t compromise the entire mission. Instead, you’re given the ability to adapt on-the-fly. The Assault playstyle is the furthest thing from Splinter Cell, allowing you to go as loud as can be, shooting anything that moves. The Panther is a deadly, but silent Sam. The Ghost is the classic Sam, skulking in the shadows and taking out his prey as a silent predator with nonlethal takedowns. At any time you can choose for your takedowns to be lethal or nonlethal, removing accidental button presses that ruin your perfect run. At the end of a level, you’re rated on your performance, and bonuses cater to those who leave guards alone entirely. Sam Fisher is now voiced by Eric Johnson (of Smallville, Rookie Blue), providing a more coherent and age-appropriate sounding voice to the role. Another returning character, is Anna Grimmsdotir, now with complications as it is implied that Sam and Anna have had some sort of relationship that went sour. Issac Briggs is Sam’s overwatch and plays the role of the 2nd player in co-op. Charlie is your tech guy, appropriately awkward, and provides mild comic relief for when the tension gets so thick, it is nearly palpable. Sam can also grab a phone and talk to his daughter, Sarah to check-in with her.

Blacklist almost could be mistaken for a next-gen game. The PC version is the cleanest looking and best performing. Facial animations are a little awkward and faces look almost plastic. But if you aren’t looking too closely, the game is gorgeous. Harsh shadows, moving lights, and great color provides the best looking game in the series.

The score by Mike Zarin and Kaveh Cohen is a digital, sweeping score that nails the feeling of a big box office movie where a threat on domestic soil is imminent and lives are stake. Menu music is ominous and low-key to not overwhelm you every step of the way and give you some relaxing moments. But when the action kicks up, the music in full force and provides an exciting backdrop. Co-Op is no longer a one-off affair, these missions are related to the story, and are given to you by Briggs, Grimmsdotir, or Charlie. While they are named “Co-Op”, some missions can be done Solo. Others demand a second person to play with. Player one is Fisher, while player two is Briggs. It’s a challenge to do Co-Op with a friend, let alone a stranger. It increases the chances of being detected or making some other kind of mistake that forces a restart. Yes, while the campaign may be forgiving, these missions are not. You’ll be reset to the beginning should either one of you get detected. It’s a harsh, but welcome challenge.

Multiplayer isn’t confined to just co-op scenarios, you can now play competitively in the returning fan-favorite, Spies vs Mercs. This asymmetric gameplay pits the nimble and agile Spies against the sluggish, but powerful Mercs. Spies play in 3rd person (just like the rest of the game), and are tasked with hacking terminals (three in total), hack all three before time runs out and they win. The Mercs take on a unique view in 1st person with a narrow FOV and must stop the Spies. If a Merc can kill the hacker, the hack stops unless a Spy can restart the hack. This tug of war is incredibly tense, and as a Merc without a pair of goggles to provide any type of vision, can be downright scary as you walk in shadow from place to place, never knowing when you’ll be pounced on next. The result though, is an evenly matched battle from beginning to end and relies on communication and teamwork. For the first time in single player, you can customize Sam Fisher. From the goggles to to guns to each individual piece of gear he equips. Now you can adjust to be more armored or more stealthy, and utilize different types of camo. The goggles can be upgraded to have another mode besides night vision, allowing you to use sonar and thermal simultaneously to best track the AI. The customization also lends itself to the multiplayer where you can purchase additional classes with the in-game currency or build a new class if the game mode supports it.

ShadowNet is a place where you can see where you stack up against your friends. It is also where you track your progress towards the next challenge. Completing challenges earns you money to put towards further customizing your character(s) across all game modes. Sam Fisher has been given a fresher, more youthful look to go along with his new voice. This the best a Splinter Cell game has been in years. Blacklist provides a wealth of content and replayability for solo players, those looking for co-op, and even many wanting to take on friends and strangers alike.