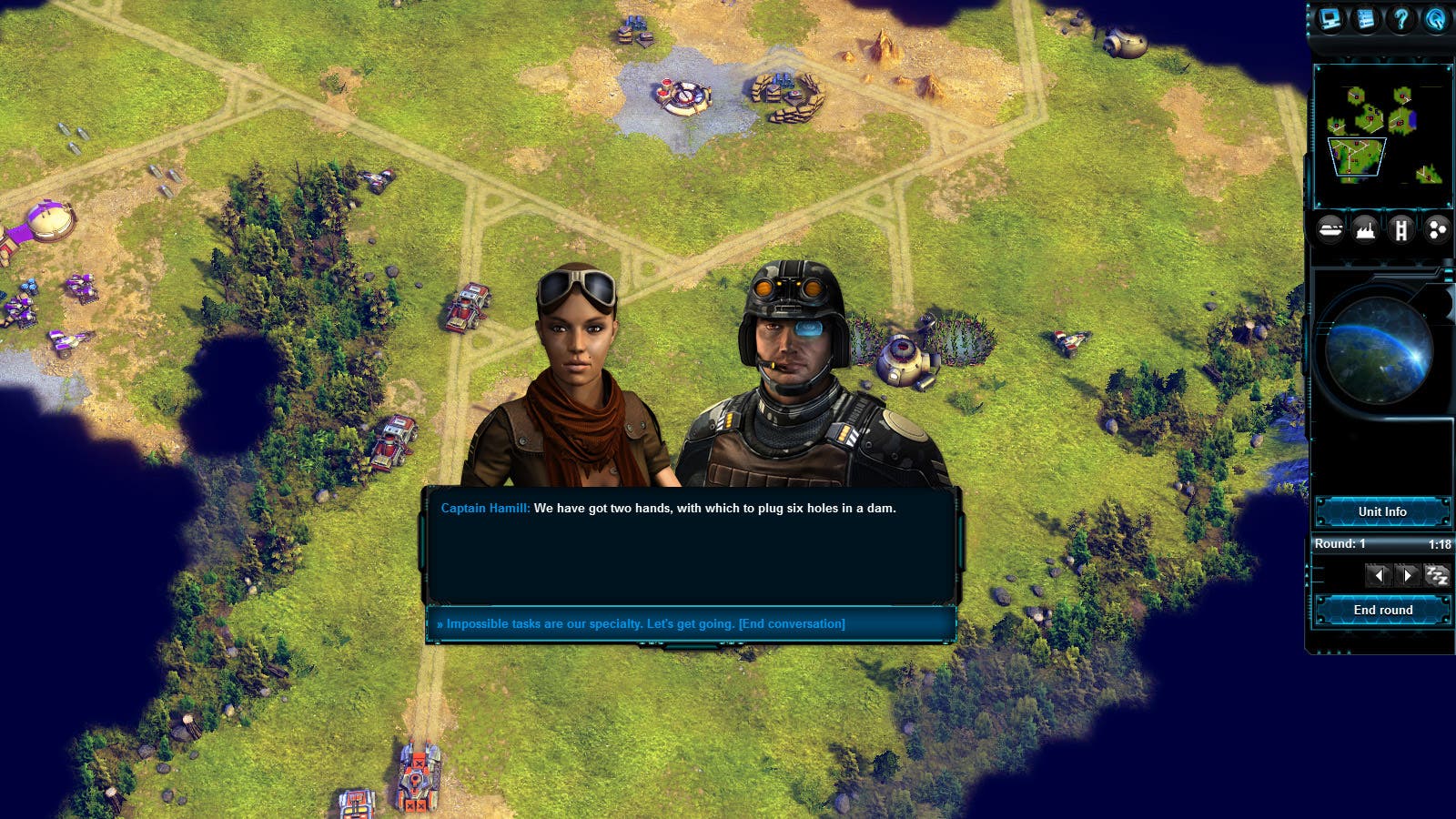 King Art Games, a German developer known for The Book of Unwritten Tales has created a successful game, two-fold. One part is their overfunded Kickstarter. The other, is the incredibly well-designed and fun-to-play, Battle Worlds: Kronos that is a hex-grid, turn-based strategy game as few do well. The story of Battle Worlds: Kronos shows humans living on said planet of Kronos, but overcome with nuclear devastation, the rich flee to Rhea. All of this is over becoming the Emporor. A very basic premise that allows for multiple factions and unending wars. The in-game cinematics that help tell this tale, leave a lot to be desired, and acknowledge you are a nobody for light humor, but it is serviceable.

Included into the game is two campaigns, “A New World” and “A New War”, which sounds like a lot of missions, but the total comes around only thirteen missions. However, between the turns you and the AI take, and the overall strategy involved, you’re looking at 20-30 hours in campaign alone. In addition to simply playing the story, you will play multiple sides of the conflict, which gives perspective and motive into what everyone is fighting for.

Skirmishes are limited to Official Maps that the developers have created, but Custom Maps can be searched, but I was not able to come across any. If you’ve played the classic Panzer General, which the developers were explicit in claiming inspiration from, you’ll be right at home. Battle Worlds: Kronos is incredibly dense and features rock, paper, scissors type battles. Some units come with “The Joker”, or a third attack option outside of the usual two. Should a unit get damaged, you can scurry them to repair stations, or build repair units. The Tab key is used to select units, which is fast and effective. There is no difficulty option, but the AI can be quite difficult and punishing if you play lazily, and it ramps up slowly as to not throw up a wall that you wish not to return to.

Since everything is in hexes, the best way to defeat a unit is to surround it, draw the counterattack towards your best armored vehicle, then finish them off with lighter units. A neat effect is that once an enemy (or yourself) loses a unit, the charred remains occupy the hex, making it unusable for several turns.

Experience Points are earned from everything you do, actively or passively. This means that whether you’re doing the attacking, or being attacked, you benefit from staying alive. This gives incentives to keep units, rather than building new ones. Over the obvious cost, you upgrade units with possibilities like counterattack, or for better armor. I’d love to tell you about my Multiplayer experience, but there wasn’t much of one. I did have a friend to play with, courtesy of King Art Games, but finding a match outside of that was a chore and was entirely unlucky in doing so. You play asynchronously (across PC, Mac, and Linux I might add) and via hotseat (take turns on the same PC).

I do have to bring up some concerns with existing bugs and weird quirks. I’ve had singleplayer games not show me that I’ve lost because I still had a mine sitting out on the battlefield, and the AI didn’t destroy it. There were no active units or ways to replenish a fighting force, so it just would sit there, allowing me to just keep pressing End Turn. Some other oddities with pop-up text that jitters around, and in the menus, some placeholder text and code that gets revealed to the player.

Even with the semi-broken multiplayer, the fact that it goes cross-platform is impressive. The other bugs I experienced can easily be fixed via patches, and it does nothing from detracting from the overall experience. One of the big draws for this game for me, is the art. It’s a pretty Advance Wars or Panzer General. Textures are incredibly detailed, and the framerate holds a solid 60fps throughout even maxed out, with multiple resolutions supported. You can zoom the map all the way out for a stylistic, top-down view of the hex-grid, which can be played from this angle as well. But zooming in for all the intricacies of the units is recommended. Battle Worlds: Kronos shows what a success crowdfunding can be. With input from the community who invested in it, it becomes a game by players, for players. And what follows is an incredibly detailed and focused game for players who love turn-based wargames that is set in all-new, unfamiliar universe. Unfortunately, some bugs and little quirks do mar some of the experience.