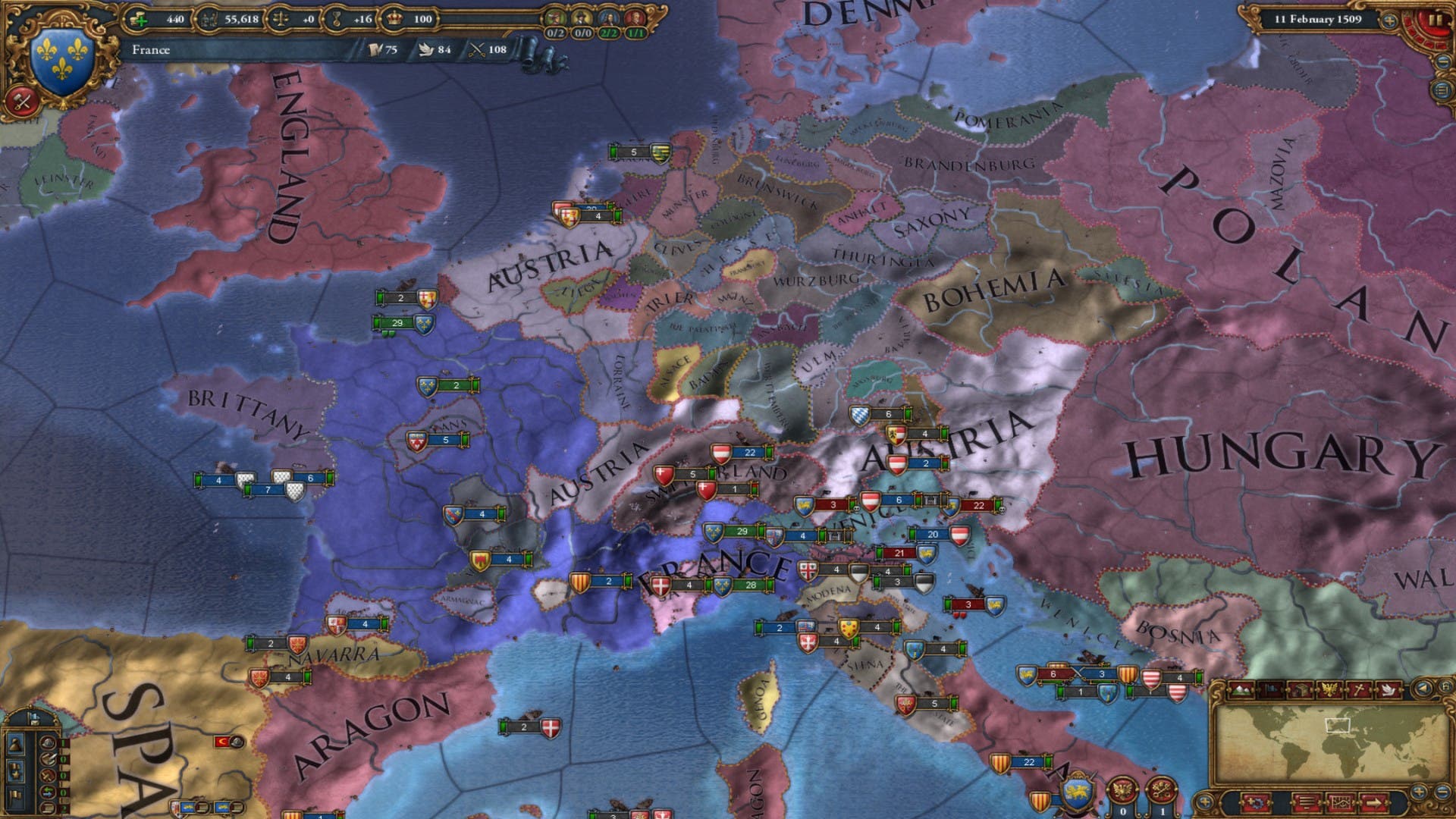 As someone relatively new to Paradox strategy titles, Europa Universalis IV thoroughly challenged me. I can say that while the learning curve is extremely high, there’s a want to keep trying. And try I did, and much of anything, spending more time with the game allowed me a better understanding of the core mechanics, but not after watching YouTube Let’s Plays and looking at Wiki’s. The included tutorials put forth a noble effort to help players understand all of the varied, and deep systems that this robust strategy title has to offer. Tutorials teach you the very basics, at your own pace. You will learn everything from UI to Combat to Trading to Exploring and offers sample scenarios to play those out. But there simply isn’t enough time in a day to learn it all. So once you’re left to start your own game, you’ll have to learn the hard way.

Europa Universalis is all about total control of a country through periods of history. After picking a starting country (which geographically focuses on Europe, hence the name), all historical constraints are removed and you’re free to do as you please. The lack of restraints is freeing, and can ultimately be your undoing if actions are taken hastily, or in many cases, without sufficient knowledge. Each game runs from the years 1444 to 1821 (or anywhere inbetween using the sliders or specific scenarios). During your near-400 years, you’ve got a lot of things to accomplish and many decisions to make. This being a 4X game, you shouldn’t sit idly by and let things happen. You must be direct, and aggressive, even when playing nice.

To keep yourself and your country moving forward, you’ll want to start a mission. Missions to keep you on-track, and only one can be selected at a time, until completed or cancelled. Cancelling a mission has a severe cost, and isn’t really recommended. Missions should revolve around what your end goal will be. Do you want to take countries by force? Do you want to setup a global trading route and set embargoes on other countries? Do you want to be diplomatic and be friends with neighboring countries? These are only a small sampling of what you can do. From there, missions will sit until completed.

As you accrue Monarch points, Idea trees become available. This allows you to increase strength on very specific areas of your country, and varies from country to country. At first, the bonuses it provides may seem very little, but over time is where the reward comes in. As this game is deliberately paced and is tended for the long term, rather than the short term. To amass a war machine, you’ll build units anywhere you own land, and can stack them and merge them into one gigantic force or split them and separate them. Ships on the other hand, are built from one of your country’s provinces that has a sea port. After several in-game years, you finally deploy them to wherever you see fit. As everything should, this comes at a cost. Each country has manpower, and the request to build anything for the use of war, costs manpower. Once lost, takes a really long time to get back.

When you’re at war with another country, or countries if you so desire. You will have a wargame percentage. This will show how powerful you are and progress in the overall war. Winning battles increases this, as the opposite decreases it. For smaller increases, you siege claimed provinces to push the enemy back. While there’s no detailed battle sequences, seeing your numbers crunch numbers is surprisingly and immensely satisfying as the game will predict how the ensuing battle is likely to go. World ranking for country is an ever present score, showing your direct comparison to other countries whether you are working on diplomacy, trade, war, etc. Knowing where you are at, gives you suggestions that either what you’re doing is successful or not.

Trade system is said to be improved, but I had trouble learning all the intricacies even when a tutorial focused on it, appearing to only skim the surface of what really is available to do. Only on a minimal level was I able to sustain trading. Europa’s user interface contains a lot of information, and as such the text tends to be a bit small and you’ll have to do a physical zoom to your monitor to read it all. There many buttons, menus, and sub-menus to parse through, and over several hours of game-time, you’ll know where they are without much fumbling.

One of my favorite, and useful features is the staggering amount of map modes/filters to flip on and off to see various categories of control and influence in the world. You’ll see religious influence, controlled provinces, trade routes, etc. It’s all useful data, and not just fluff or flair.

You pause, or slow-down or speed-up the pace of the game at your leisure. You’ll constantly be fiddling with this as you’ll want to pause for queuing units, reading finer details before making a major decision, or simply to take in the beauty you see before you. Europa Universalis IV uses a modified Clausewitz engine that powered Crusader Kings II. It’s gorgeous animations, water effects, map and terrain detail is incredibly detailed and clean. Over time of playing, as the calendar changes, so does the color of the landscape from an orange during autumn to a bright white cascading down from the north.

Steam Workshop support further extends the life of this game. It really doesn’t need it, as there are endless options, but the workshop offers more maps, new loading screens, additional ideas, and mods that just make the UI a little bigger like the diplomacy screen. All of it is non-essential, but if some things bother you about the interface, you’re likely to find what you’re looking for. With the integration of Steamworks, you and up to 32 people can join in and choose a country that hasn’t been chosen by other people. I was able to join a game and be helped be several, more advanced players, to help teach me the game in general. In it, you can be either cooperative or competitive. It is a fantastic way of playing the game, and really one of the most preferred if you can get a group of regulars together.

If you are an owner of Crusader Kings II, you can export any save game currently in-progress or completed, and import it to Europa Universalis IV as a mod. There are religions, groups, historical events, and things simply not found in EU4, and exporting a save from CKII can have an interesting transformation on the game. Note: You can not do the inverse of bringing your EU4 game into CKII due to the timeline. There’s nearly an infinitesimal amount I can say about Europa Universalis IV, it’s a fantastic game with intellectual depth, robust systems, and an unmatched sophistication. The game is also understanding and appreciative of a player’s intelligence. It does assume a lot from you, but that’s where searching YouTube and Wiki’s will net you specific teachings. I feel I’ve really only scratched the surface of what Europa Universalis IV has to offer, after winning only a couple of games. This is strategic excellence and unbridled freedom at its best.