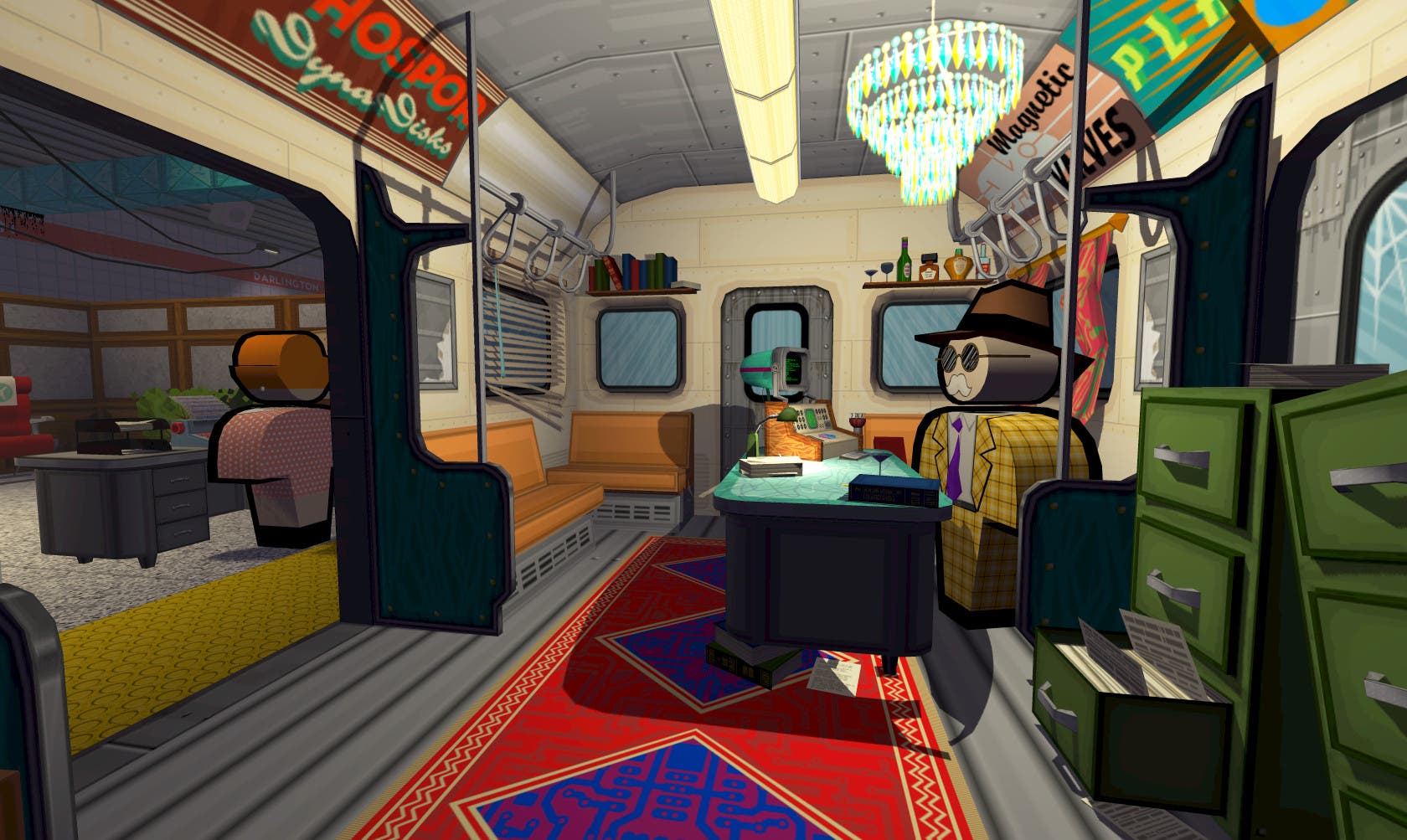 You are Polyblank, a spy who has come to see the director. After his briefings, he hands you Missionoyl pills to send you out on assignments, it’s dumb but it’s dumb in a fun way. Once in the world you’ll instantly realize that Jazzpunk’s comedy comes from some of the silliest and most unpredictable interactions the game has to offer. Where most games focus on humor through text, Jazzpunk’s humor comes from a mixture of visual and interactive gags. They come in fast and nearly hit on every encounter. It’s layout reminds me a lot of what you would expect to see in a Airplane! style movie, or maybe more on the nose, Spy Hard. It’s impressive how Jazzpunk has handled the funny. Instead of focusing on the written joke, they lean on participation from the player in these nonsensical things within the world. You could run straight through each chapter and only get a taste of what this game is made of but it’s in the exploration that the comedy really shines. You’ll want to walk around all every inch, finding things to click on and use. Go to a payphone and dial a number, use a metal detector at a beach to uncover random junk, or maybe pick up an ever so convenient giant cotton swab next to a man with giant ears. Trust me; your curiosity will be rewarded. One could look at Jazzpunk in a similar vein as Gone Home, where it’s focus is around exploration and interaction rather than going from point A to B with the highest scores in mind; just think of this as its tonal opposite. Because of it’s focus on everything surrounding the main objective, the first mission alone I had spent over 40 minutes just clicking on everything. When I said everything, I mean everything. I talked to every person I could, I clicked on every door, I degaussed anyone I could before firing on pigeons, and by doing so I was able to laugh out loud at all the bizarre things Jazzpunk was throwing my way. The game will even throw you curve balls and toss really odd minigames at you; surprisingly they can be quite fun. In the first mission, I spent nearly 30 minutes just talking to the many crazy idiots that populate the world, performing bizarre side jobs for them, uncovering the unseen minigames, and getting a robot to talk dirty to me. Oh and be sure to click on the car in the Vacation level, then tell me that didn’t make you chuckle a little bit. It’s not a long game by any means and extremely short if you’re a cold hearted person who only finished the objectives (you monster). I clocked in around 3+ hours and I even missed a few things that I’m going to want to go back and experience. I don’t want to give too much of Jazzpunk away, it’s humor benefits from the surprise. It’s a shame it isn’t on any of the big three consoles yet because I feel this game would fit well in a social setting on the TV. Comedies are funnier when you’re laughing with friends and I feel this would be no different. If you enjoy laughter, you should play Jazzpunk, but beware, it is goofy humor and not everyone will ride that train into laughter town. Regardless, Necrophone Games has proven that you can make a comedy centric video game that will leave you with a big stupid grin on your face.

A Steam code for the game was provided by the publisher, Adult Swim Games for review purposes