When the people behind who made Shogo, No One Lives Forever, and F.E.A.R. leave Monolith to form a new studio, you pay attention. Betrayer is Blackpowder Games’ first title, an atmospheric first-person adventure. Sounds familiar. Shipwrecked, you embark on finding the settlements in the “New World”, located on the Virginia coastline in 1604. Quickly though, you discover that things are not what they should be. 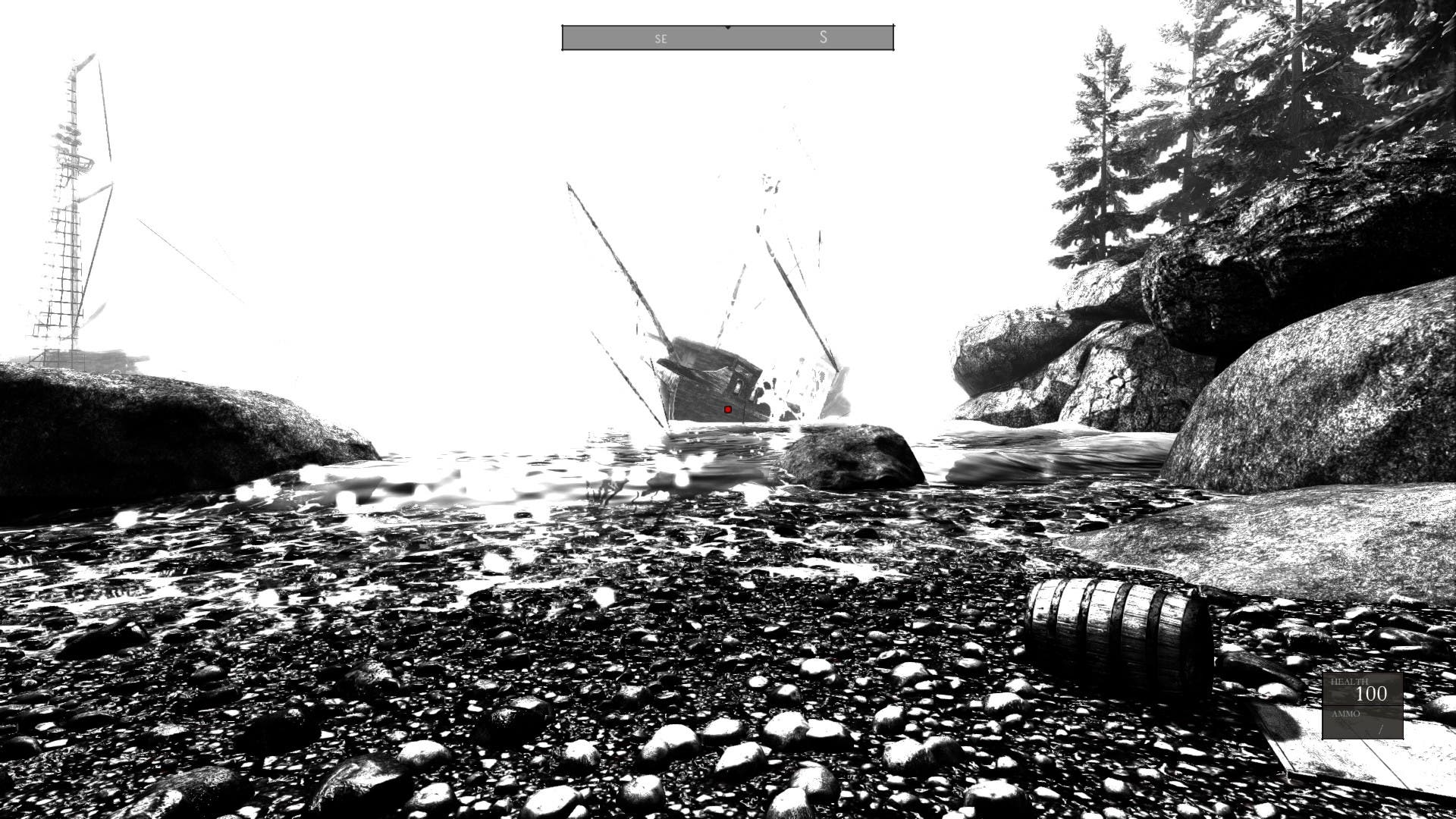 Betrayal is shrouded in mystery from the moment you start it up. You meet a woman in red who appears to have amnesia, towns are deserted, wooden grave crosses mark the many dead, and there are often things that want to kill you. If you walk long enough, you’ll stumble upon treasure, scattered pages, abandoned Forts, Sentry Points, and other settlement areas that become the hub of the area. These points get marked on your map and become fast travel points. I applaud the developers by not holding your hand. You are free to explore the eight sprawling regions the world is separated into. Your own morbid curiosity is the singular driving force.

In time, you’ll learn that the world is split in two, light and dark. A contrivance by today’s standards, but absolutely fitting with the game’s default aesthetic of black and white. The light world contains ghastly Spaniards, ash demons, natives, and otherworldly spirits bathed in red that want to do you harm. The dark world, is even more dreadful, as everything obfuscated in fog with a limited view distance where skeleton enemies burst through the ground and wraiths hunt you down with ferocity. 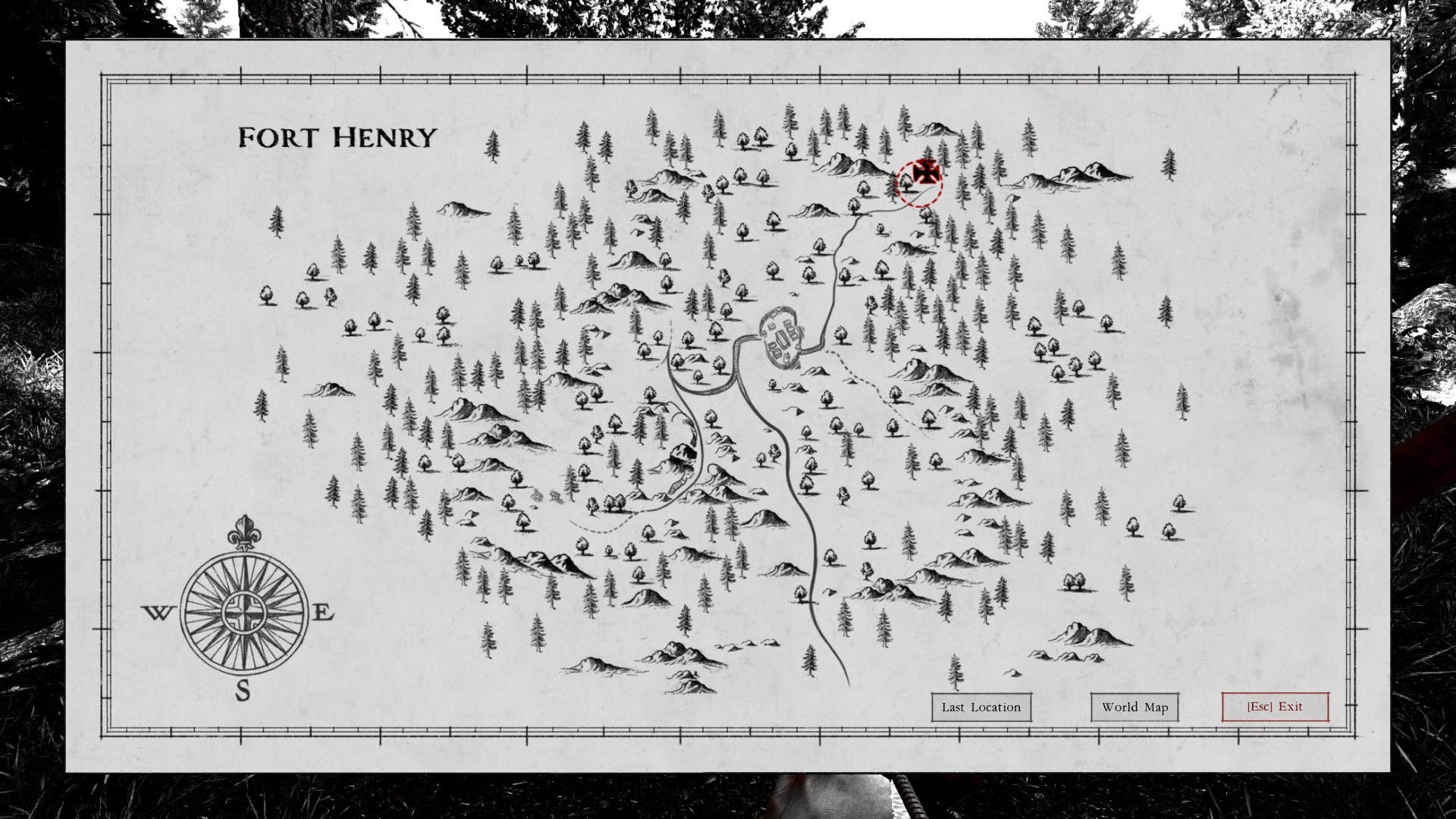 Since there aren’t any living people to talk to, the game’s quests, known as “investigations” happen dynamically. You’ll find a page here, a skull there, or dig up a piece of torn clothing. All of which add a note to your journal in the form of clues. These clues all come together once you start to explore the dark world and talk to apparitions who have lost their way. And when you inform them with what you’ve found, can help you learn more about what happened and filling in their blanks. Each character has their own story to tell, or intertwines with others across multiple locations.

Objectives differ which plane you are in. If you need help, you can “listen” and rather than use breadcrumbs or paint a huge marker onto the game, it uses is the creepy audio to point you where you need to go. You can’t spam the button to get constant feedback, but every few seconds this can help you. If it isn’t enough, there is a toggleable button to put a subtle marker that becomes part of the compass to help you even more.

Until the latter parts of the game, the number of enemies you face at one time are generally low. Being stealthy is rewarding as you won’t attract that much attention, and can one-hit kill some enemies like in Far Cry 3. Shooting off your musket or pistol will bring everyone in the surrounding area. Since they all have the same weapons you do, strategizing how to attack is easy. Archers fire fast and requires circle-strafing. Dodge the shots of musketmen, and wait to attack while they’re still reloading.

Similar to Dark Souls, if you die, you drop your gear. In order to get it back, you must go back near where you died and retrieve them. Die again at any point and it is gone for good. While you’re never in any immediate danger or going to die any unfair deaths, it can become easy to be overwhelmed and die due to not prioritizing your targets.

Era-appropriate weapons are littered throughout the world. You’ll be equipping muskets, crossbows, bows, and pistols as a means of dealing with the enemies in the game. You can only equip three weapons at a time. The bow can be fast and quiet, but the gunpowder-filled weapons like the pistol and musket are slow to reload, forcing you to make your shots count. Looting dead enemies, containers, and chests make for the ability to purchase better versions of weapons you use, buy more ammo, and sell the junk items you no longer will be using. Some quests will return better rewards than you can purchase.

Charms enhance your character and make the gameplay a bit easier and more enjoyable by giving you swifter movement, faster reloading, more health, etc. Like weapons, only three slots can be filled at any one time, so experimenting with your playstyle will help determine what stays in those slots. Often you’ll find better charms in the wild than you will by purchasing them at the store. 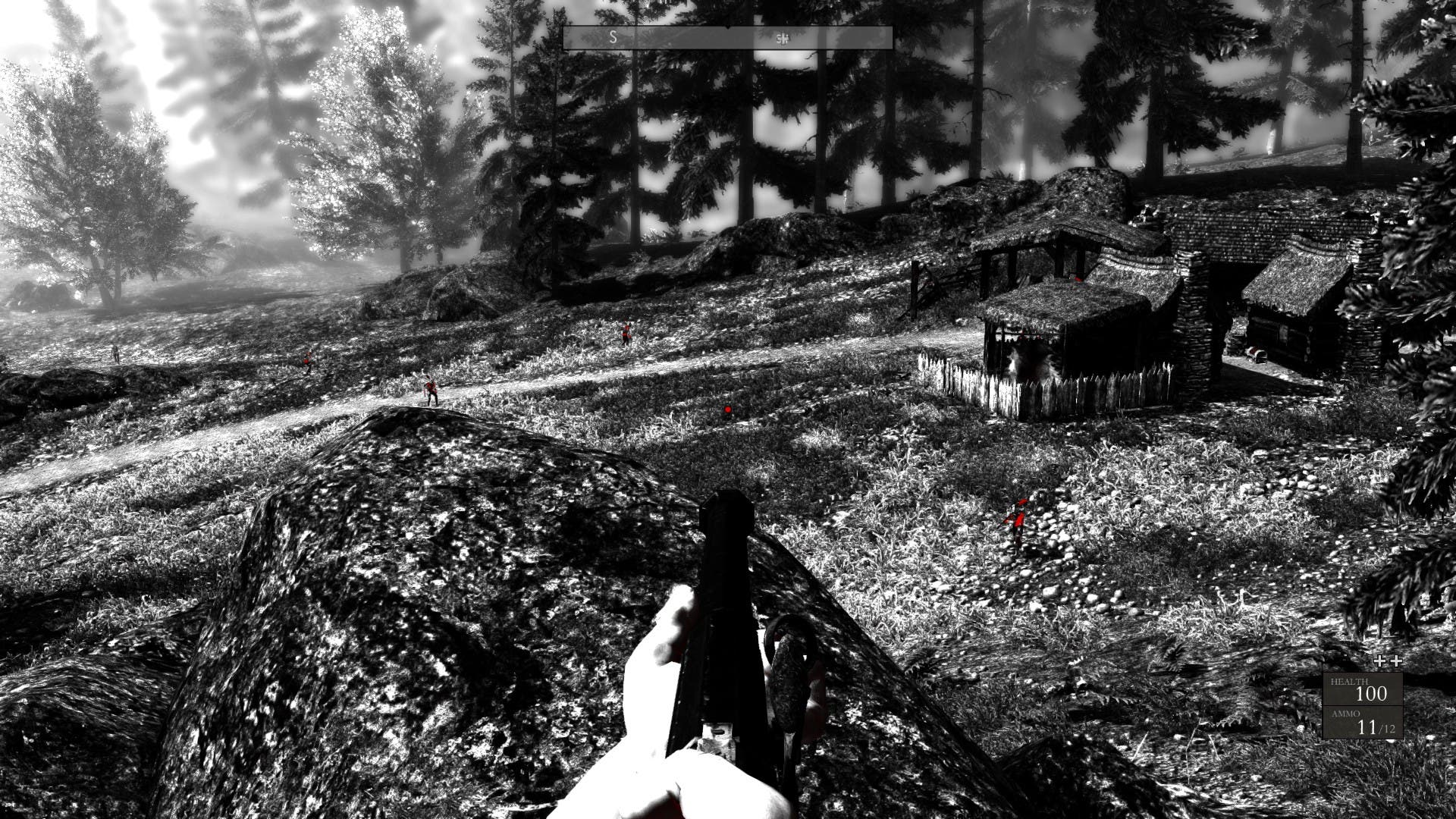 The Unreal Engine 3 is used in an interesting way, creating an ominous vibe with the black and white. with splashes of red. There is an ability to boost the saturation to give the game full color if you so desire, but the harsh blacks and whites makes the game work on so many levels. The developers included the color saturation due to complaints, but I wish they had stuck to their guns and maintained their artistic vision. I fear that many will bring the color back and ruin what works. One complaint is that the enemies are colored red at all times, and tend to get get lost when everything else is in color around them.

The audio is superb. The game lacks any music, but it excels ambient audio that shouldn’t be anything but soothing. The wind, for example gusts up often, rustling the trees and swaying the grass. It’s a beautiful sight, but combined with the black and white visuals, makes standing there unsettling. And it’s really for no reason – it’s just wind. Snarling enemies are raw and horrifying when they notice you via a musical stinger. The sound of muskets are loud and echoing, and arrows create the “whoosh” as they fly by your head. All of it is immensely satisfying.

It’s unfortunate there are some random bugs popped up, some of which crashing me to the desktop again and again. I was unable to determine the exact cause, but it happened while I was in the shop bouncing between items to sell and buy. Luckily the game saves often, but is immersion-breaking having to experience it every so often. 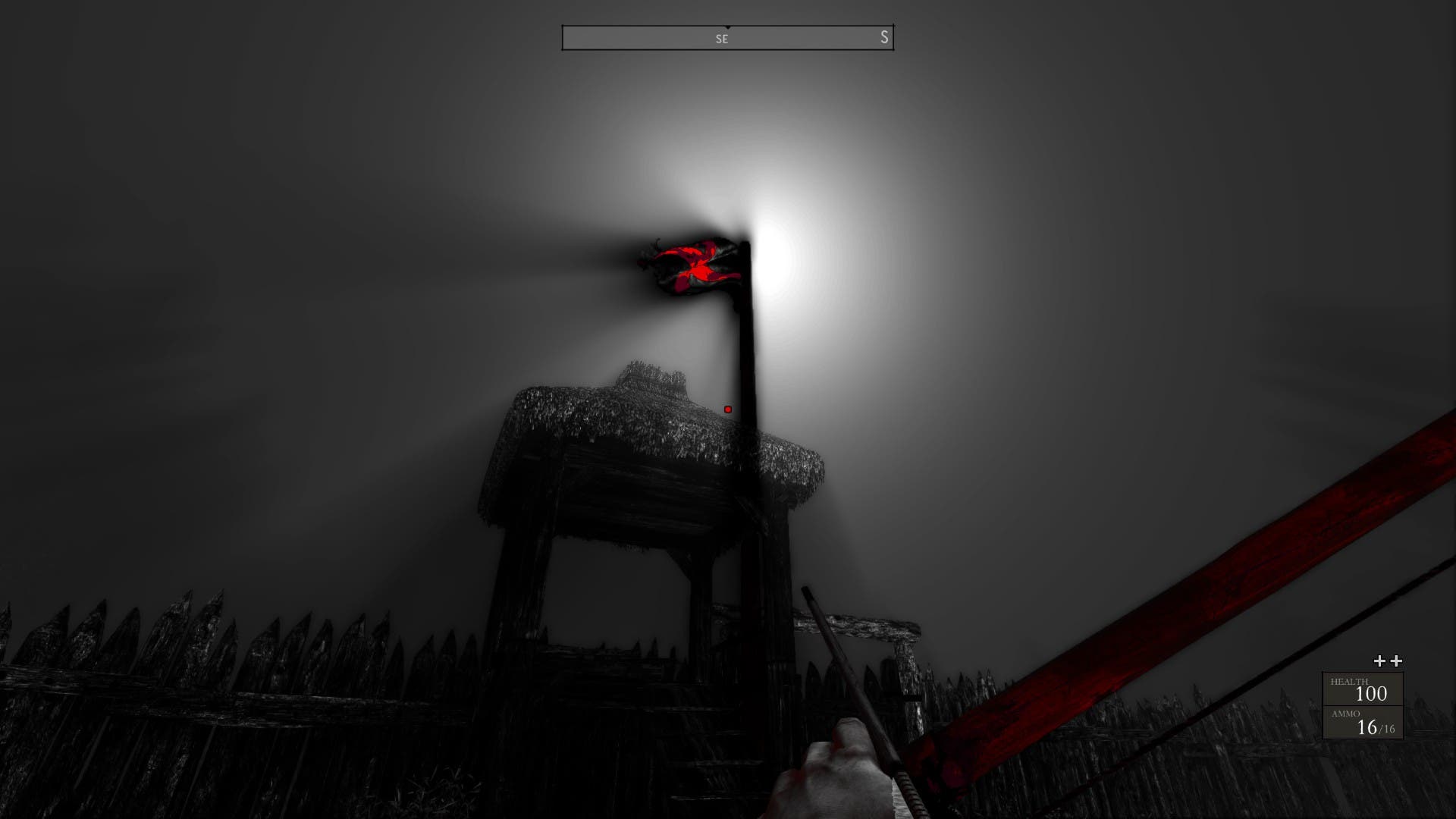 Betrayer is a unique experience by combining genres in special ways that simply works. There’s an intriguing supernatural tale that never gets over-complicated or lost in its own plot. In terms of length, unearthing clues takes time and with the challenging combat, clocks in at around eight to ten hours. This is one of those games that should not be missed. If Betrayer is any indication of satisfying genre-bending games, I look forward to what’s next from Blackpowder Games.