“Welcome to the future!”, is what the main title track sings to you upon starting the game. This really sets the tone for the game, from the surprisingly awesome title track (compared to the last few that have been pretty embarrassingly bad) to the bigger and brighter world to play in. Time trials are the game’s core. You’ll be working to best your friends or even your own time to take a higher position on the track-specific leaderboards. You’ll accomplish this by taking a motocross bike on a 2D plane and try to maintain balance to overcome obstacles in a way such as not to slow your momentum or otherwise waste precious time to reach the end goal. Platforms crumble and fall apart while riding on them, explosion happen off in the distance to distract you, and you’ll be jumping large chasms with great uncertainty whether you’ll make it or not. This sense of free-falling and spending equal time in the air is immensely rewarding.

The finely crafted levels from RedLynx are relatively easy to those who have played the series before. The first four sections should be a breeze as they range from easy to medium. Beyond that, hard starts to become a challenge, requiring specific talents and using special bikes in order to get a silver or gold medal. Medals attained also unlock level tiers, so the better you do, the faster you’ll be able to play in new areas. You may be required to play earlier sections, and you’ll notice you’re doing better and what was once a challenge is no more. You feel that as a player, you’ve improved. 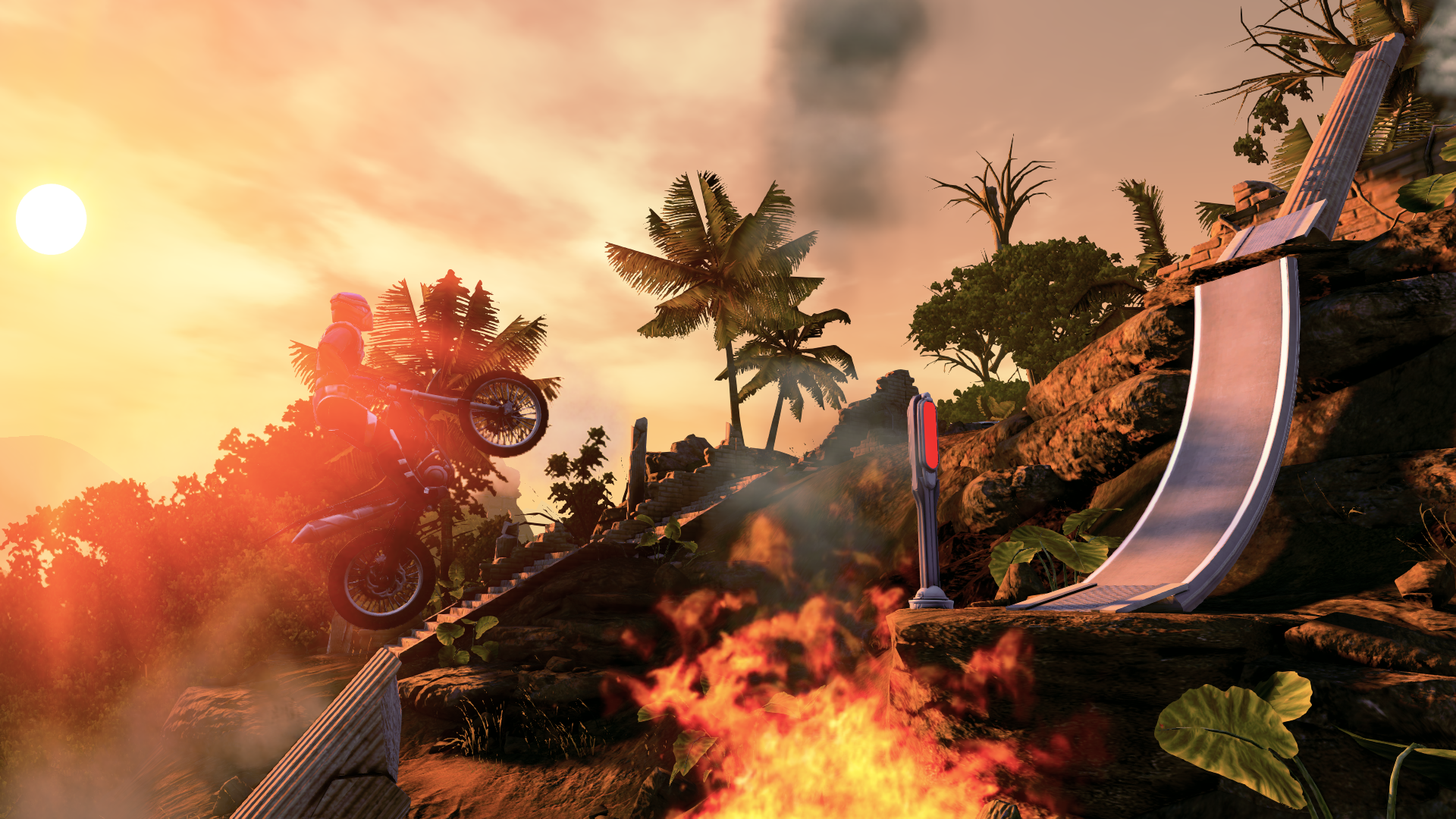 Customization to your rider and bike are back. Completing tracks and earning medals nets you money. This money can be used to buy new clothes for your rider. This is further exemplified by your level which goes up by doing well, and also locks items out until you’ve reached a certain level. Bike parts work similarly to clothes, but require specific tracks to be beaten or levels reached in order to be purchasable. Being so superficial, requires a lot of work to get cool items on display that no one will see but you. It is just the carrot on the stick for progression.

If you’re the kind to want to unlock everything game has to offer, you’ll need to know one set of clothing in particular is locked behind playing specific tracks, achieving a gold medal on them in both Trials Fusion and Trials Frontiers, the recently released mobile game. Additionally, as with Ubisoft games, Uplay also locks out some cosmetic items in which you have to unlock after earning the prerequisite Uplay points. All of this is not necessary, but having anything artificially extend reasons why you can’t wear a specific item or clothing is frustrating. The world is much bigger, higher in the atmosphere, and is brighter as a result of this future we’ve been brought into. Each level is detailed with higher-resolution textures, with some nasty texture pop-in. Your rider model is crisp and animates fluidly as he whips through the air whether just flipping or performing any one of the insane FMX moves.

The longevity of the game outside of RedLynx is up to user-made creations in the form of tracks. The built-in track creator allows anyone to create diabolical levels to share with the world for anyone to compete on.  The tool itself is moderately easy to use, but a bit confusing from the get go. Track Central is a hub, where you can find highest rated tracks, new tracks based on difficulty, or even track specific creators so you always see the newest thing that they make. It’ll be interesting to see if those who worked hard on levels in Trials Evolution will move on to creating all-new levels here. 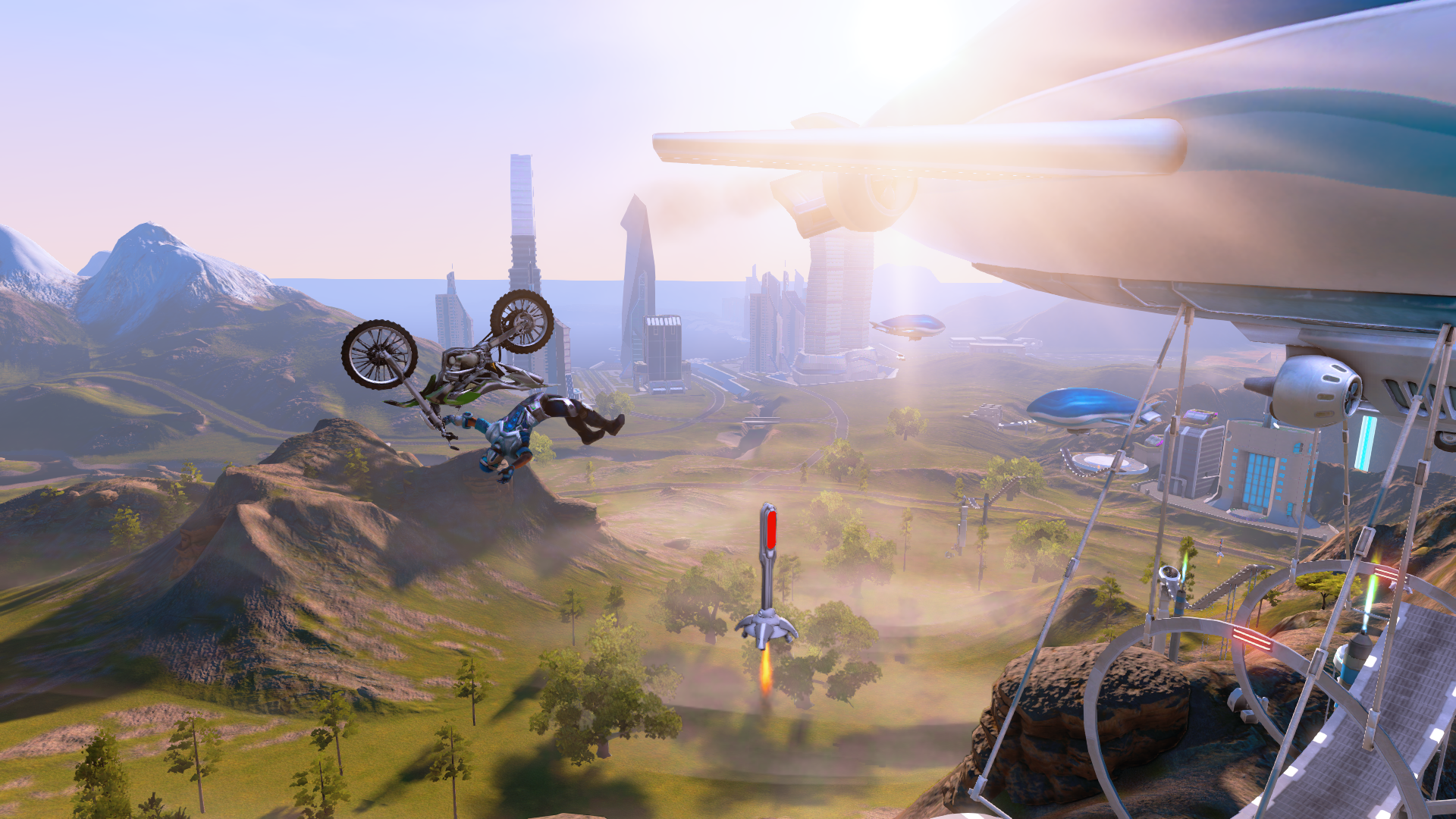 Most people adhere to “if it ain’t broke, don’t fix it”, and works well in most scenarios. RedLynx decided to mess with things a bit by adding a trick system. With the right analog stick, you can manipulate your rider to take on various poses to earn bonus points in FMX (Freestyle Motocross) levels. While in theory this works, the game does not always register the trick especially when your rider is in the exact position. I feel this is mostly due to the game, and not player error in my experience. Outside of being wonky in that regard, the trick system can eventually be unlocked into regular trials races with no added benefit to the game other than to show off and complete challenges.

RedLynx took many steps forward with this game, but also makes a step backward. Trials Evolution‘s online multiplayer has been gutted for a local multiplayer experience in Trials Fusion. While it isn’t criminal, it’s a bit confusing as to why this decision was made. The local multiplayer works just as it did in the prior game, allowing you to mix n’ match event types and each player gets color coded as they all align on the track, higher or lower from one another. Get left behind? And you take on a time penalty but are teleported to where the rest of everyone is to be given a chance to be competitive. The visual problems, faulty trick system, and localized multiplayer can be overlooked when you compare it to the performance and depth that Trials Fusion offers both in the singleplayer and the potential of track creators. Whether purchasing on new or old consoles, this is more Trials and there’s honestly nothing wrong with that. Welcome to the future.