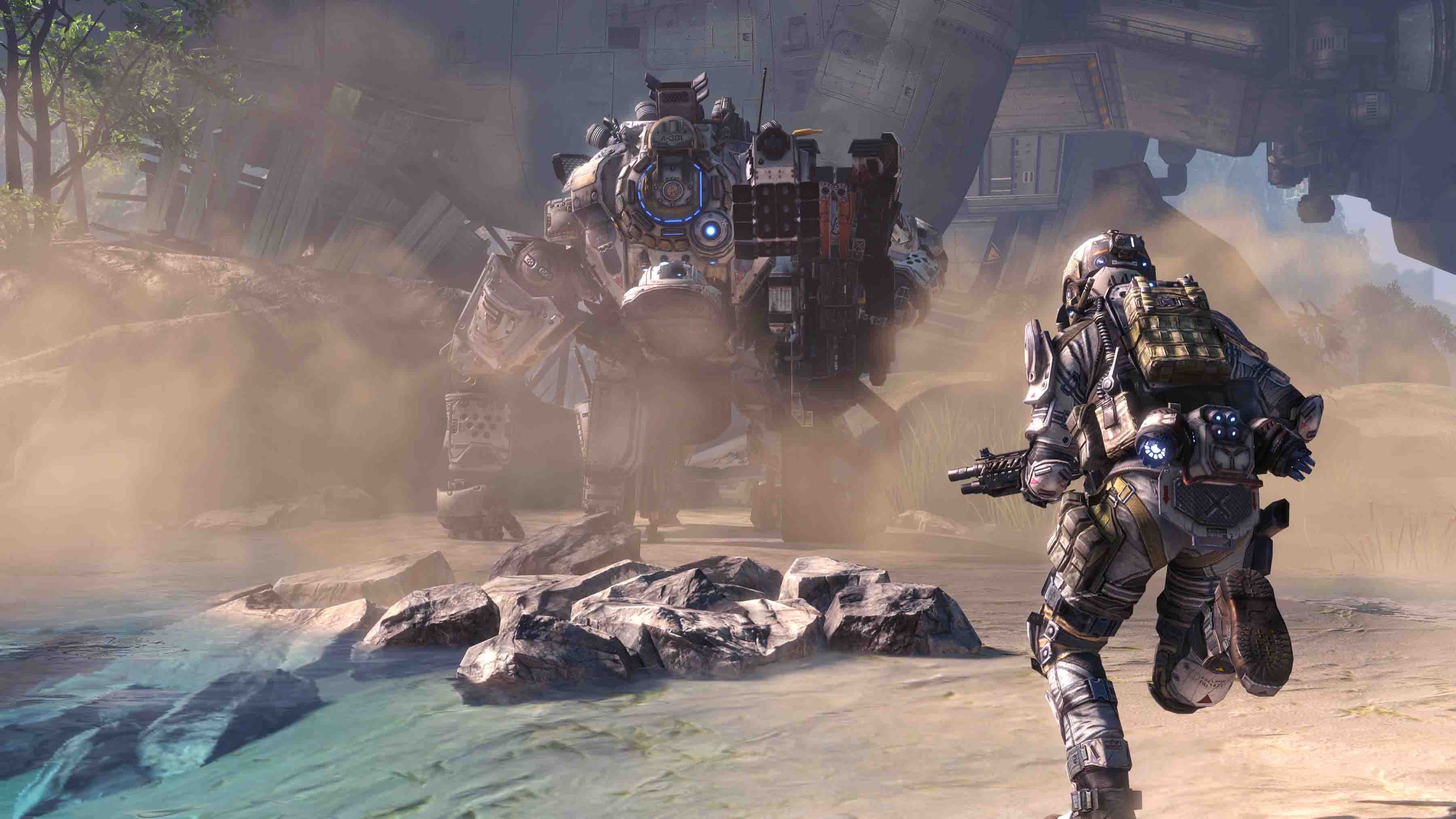 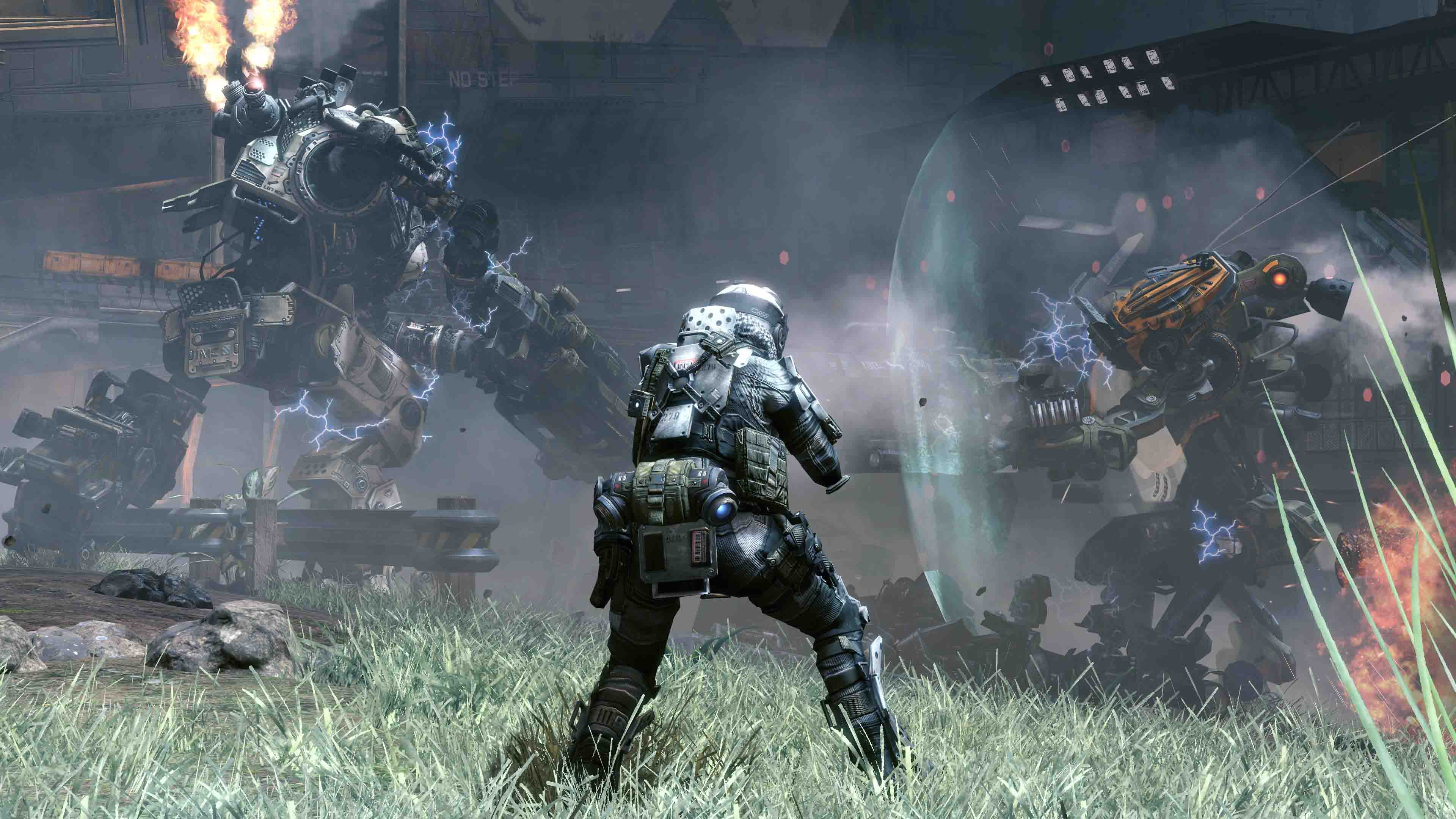 Titanfall likes to pretend that you’ve never played a recent first-person shooter before, going over the very basics of movement and shooting. Soon you realize that the familiar is no longer, as you’ll be running faster, jumping higher – even double jumping, and doing parkour on sides of buildings. It’s not known why this training is needed, but you should pay close attention. Not long after, they introduce something new and exciting, getting in and out of a mech. It is then you realize how much different it is controlling these titans. The schools of training you’re put through allow the developers to place everyone on equal ground from the get-go. Everything about how Titanfall moves and feels is unlike any other shooter before it. While the first few moments of the training seems redundant, becomes crucial to your eventual success.

There’s not much of a campaign to speak of. If you wish to get exposition, some flair is added to the beginning, middle, and end of each mission to fill you in. These can only be played in multiplayer, so you’ll get your story beats in, but it loses a lot of its luster with in-game chat breaking the immersion. So you’ll ending missing out on learning more about this world and why you do what you do. It’s clearly the future, and loading a level will actually give you a bit of history as to why this location looks the way that it does. It doesn’t take long to complete each campaign from either side, but in doing so will unlock titans to be used in multiplayer, so it is worth it for that alone. For multiplayer without the fluff of storytelling, is Classic Multiplayer. It is here you get to play one of the five modes: Attrition, Hard Point, Last Titan Standing, Pilot Hunting, and Capture the Flag. Attrition is team deathmatch as we normally know it, but follows the war of attrition model, in which you wear down the enemy into nothing. Hard Point is similar to Conquest in the Battlefield series or Call of Duty‘s Domination mode where controlling points on a map nets you points, once the cap is hit, you win or lose. Pilot Hunting, Last Titan Standing, and Capture the Flag are self-explanatory and round out the modes to provide variation. There’s even a Variety Pack that will throw in all modes so that you’re not just playing the same thing over and over again.

You’d think these matches, capped at 6v6 would feel really small, but they don’t. On the contrary, the game frequently drops in AI characters to make the arenas feel more populated and lively. These AI characters take on the forms of grunts, squishy military members that cannot pilot titans, and spectres, who are robotic forces that take up arms to help in the fight. You can hack the spectres to work for you until they die. They are there for distracting you, and can help decrease the timer until your titan drops. While treading the familiar, you are allowed to create and modify your own custom classes to tailor your style of play and cater to specific situations. The weapons aren’t all that much of a standout, with the exception of the smart pistol. The smart pistol can lock on to one or multiple enemies and once you pull the trigger, will fire all bullets. The hits are so precise, that it will likely kill every target you have. In a smart decision, Respawn made this pistol a primary weapon rather than trying to fit it in as a secondary, it’s very powerful and is respected as such. The other weapons like SMGs, carbines, rifles, LMGs, and sniper rifles behave and perform like you’d expect them to, with some futuristic designs that add to the overall feel.

Burn cards are new and interesting. These earnable cards can boost a play session for as long as you live or until the match ends, provided you’ve died once already. You can select to use cards that give you an amped version of a weapon that does more damage, make you run faster, and even reduce build time of your titan. Be killed before you can use it and it’s gone until you get that card again. It’s a complete throwaway feature, but really allows you to earn some extra experience and try different weapons and items even if you don’t have them unlocked. 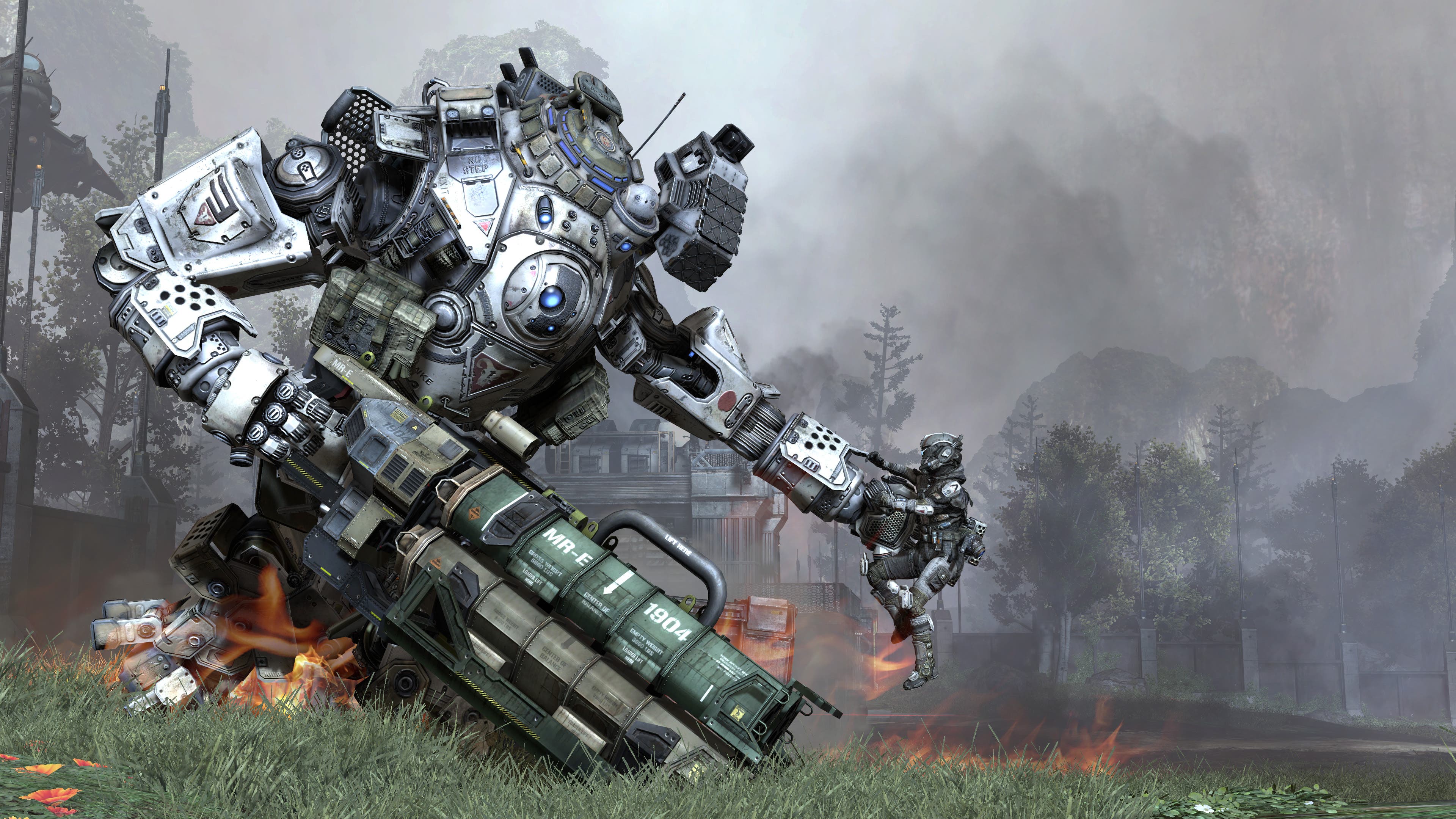 What would a game called Titanfall be if I didn’t talk about the titans? There are three types based on agility: Ogre, Atlus, and Stryder. Ogre and Stryder are the aforementioned locked titans until the campaign mode is completed. The Stryder is the most agile, but the most fragile as well. The ogre as you’d guess is the heaviest, can only dash once, but can take a huge beating. The atlus is the middle-class, capable of pretty much any role. All titans can be customized similarly to a pilot, with primary weapons, ordinance, and other abilities to throw electric smoke to make hardware go haywire, or use a vortex shield to catch projectiles and then send them back to its original owner.

There’s a healthy number of maps included, tallying up to a respectable 15. This is really important for a multiplayer-only game. Boneyard is desolate and uninviting with corpses of larger than life creatures laying about, Lagoon is a paradise ravaged by war, Outpost 207 sits atop the clouds making you feel short of breath as you play, Demeter is an industrial complex basked in harsh sunset. Each location feels unique and fits within the confines of the game. Most of the maps do cater to specific modes over others. Enjoying the game to it’s fullest will more than likely require friends, and a lot of communication. While playing solo is perfectly viable and totally reasonable, playing with strangers.

Titanfall is just ripe with stories to tell, experiences that don’t ever feel the same match to match. There’s nothing like being surrounded by titans in the open as your titan comes screaming in to destroy one, and and as you board yours, lay into the other with righteous fury to destroy them, send it into a doomed state and rip the pilot out his or her seat and toss them aside. When doomed, there’s a way to have your titan have a nuclear explosion upon ejection, and setting up the right time to eject when enemies are present can do catastrophic damage and feel completely rewarding. The stories just never stop. You may experience the same types of situations, but just the way they play out, even if not in your favor just leave you with such immense joy.

There’s an odd sense of attachment you develop towards your iron giant. Losing is somehow still fun, with the ability to be extracted from the map and taken to safety if you are defeated. I had just called down my titan, and we made our way to the extraction point, and were being overwhelmed. I got out of my titan and boarded the dropship at the last moment. The AI for my titan had taken over and was fighting a losing battle, and leaving my titan all alone as I fled to safety was it’s sacrifice. Titanfall is a nonstop thrill ride. Respawn Entertainment has taken considerable effort to make sure every aspect of the game was balanced well, not only in weaponry, but also in the ebb and flow of a match. It provides momentum unlike any other. There’s always a unique story to tell, each time you play. It straddles the familiar a bit too much with war-torn locations, a class system, and customizable loadouts. But when it comes down to it, Titanfall is refreshing and exciting that will have you spending countless hours playing with one of the largest grins on your face.

An Origin code was provided by CheapShark for review purposes