Super Time Force came out at a perfect time in the release schedule for many like myself who have been absolutely dying to play something on their shiny new current generation systems. Even if it is a game that could run on previous generation hardware, it’s nice to have a big name indie game come to Xbox One finally. 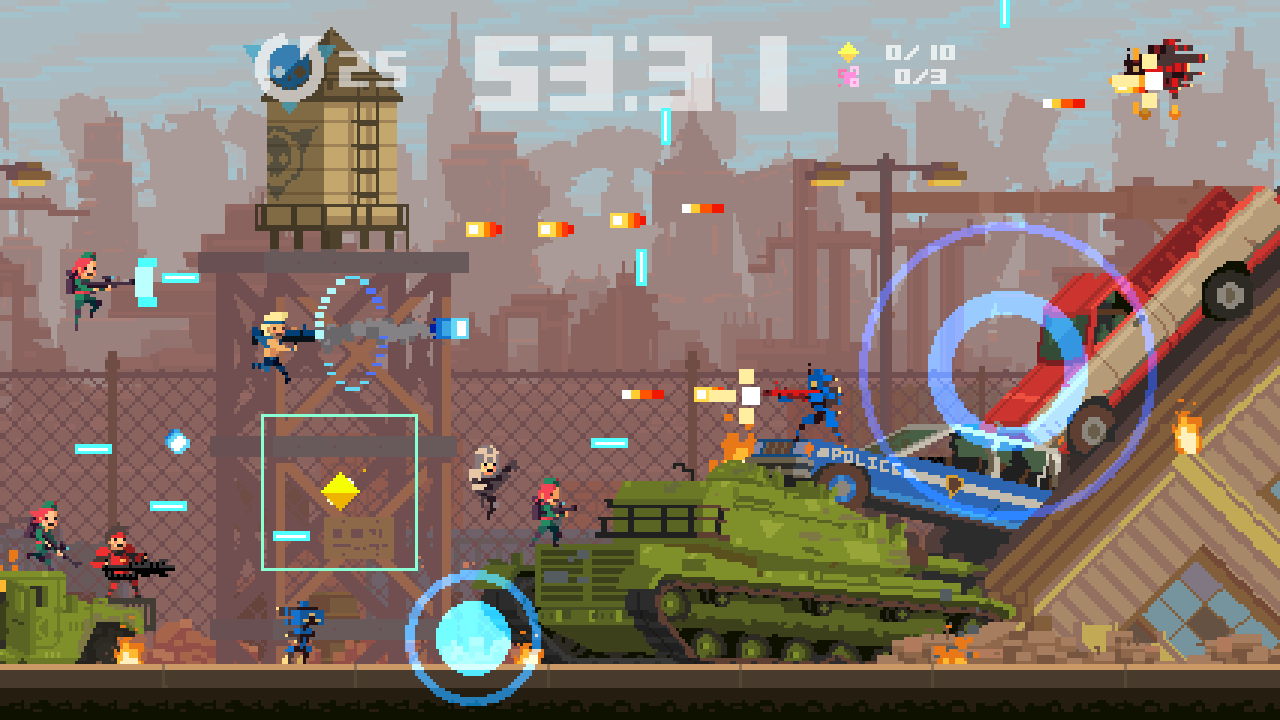 The premise of Super Time Force is that an elite team of soldiers travels through time to help save the world. At first blush, the game doesn’t seem to be too different from side-scrolling shooters like Contra or Metal Slug. Enemies are pretty tough to avoid and are one-hit kills.

When you die, you have the ability to travel back in time to any point before you died and continue on playing — which is a mechanic we’ve seen before in games like Prince of Persia: Sands of Time. But the new wrinkle here is that when you go back in time, your previous lives continue to exist and fight alongside you until they originally died. If you prevent a previous life of yours from dying, you also have a chance of picking it up as a power up to increase your life and give you more fire power. The time to pass a mission is only 60 seconds (although you can pick up power-ups which lengthen your time limit). If time expires, you essentially die and have to rewind to a previous time. Also, the game gives you 30 continues, but you can collect more continue attempts as you play through a stage.

Every character has a regular attack and a special attack that has to be charged. Super Time Force starts off with three characters unlocked: Jean Rambois, who shoots bullets and special move is to spray bullets in a wide radius. Amy McKillen’s regular attack ricochet’s off of surfaces, and her special shoots a big laser beam through walls or any other sorts of objects. Finally, there is Shieldy Blockerson who blocks attacks and can also put down a shield which bounces projectiles back. You can unlock several more characters as you play through the game– these characters are scattered throughout the game’s levels and you have to save them from getting killed to unlock them. The game has a lot of charm to it. It uses old school 16-bit look for the graphics. The intro and in-between mission dialogue is usually funny, although once in a while the game seems to think it’s funnier than it actually is. Super Time Force’s dialogue can be flat at times but it never is flat out terrible.

The core of the game is broken up into six worlds which happen during various time periods in the past and future. Each world has three levels which you run and platform through. And one final level which is more of a boss fight. In my experience, the standard levels act like any generic 2D shooting platformer but are extremely hard. So you usually fumble through that section of the game by rewinding and eventually getting past hard parts through trial and error. 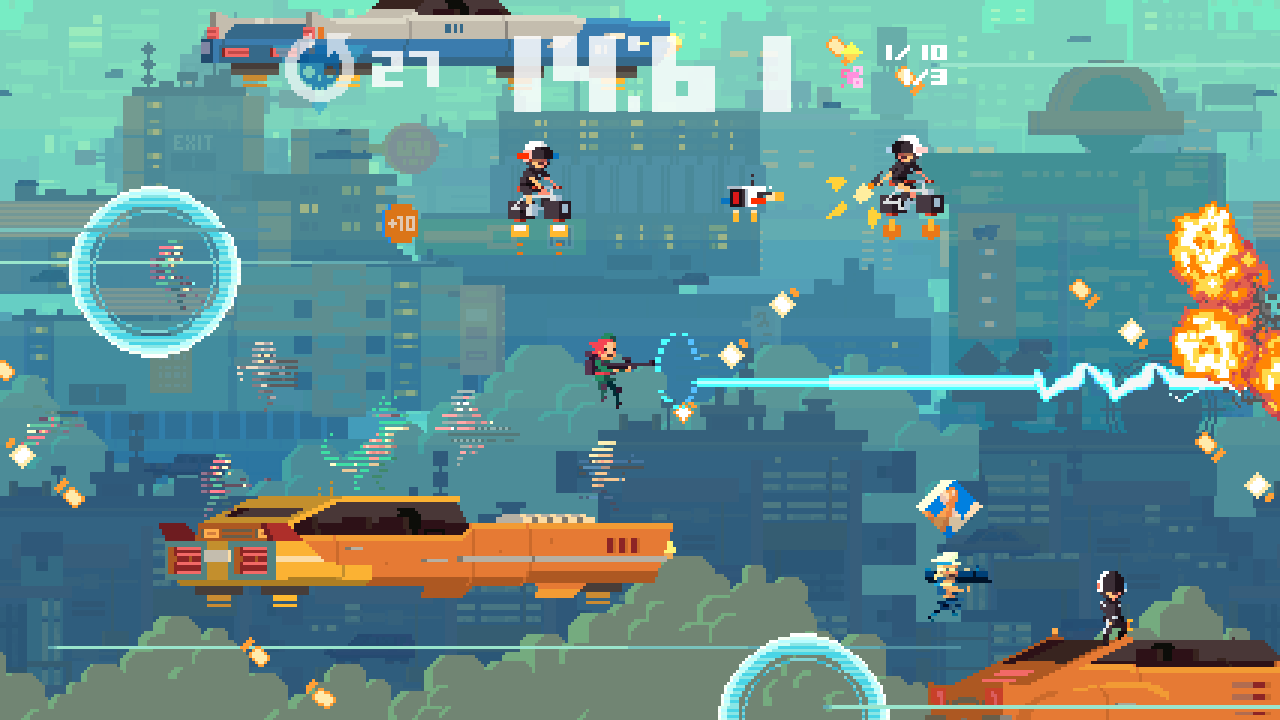 That being said, it really is the boss fights that are extremely well-designed and bring the puzzle elements of time travel to the forefront of the gameplay. I would have liked to see more of these and less of the standard platforming levels.

Most of the time, the game’s difficulty is a non-factor, but I did run into an issue trying to beat the second last level. The way some of the enemies are laid out through that level, makes it very difficult to pass a section of that level even with the ability to rewind. For most of the game it essentially teaches you not to worry about every single time you die, because you probably have enough continues. But once you get to this spot in the game, that all breaks down as you need to save every live possible to get through this level. The most frustrating thing about it, is that you can invest 20 minutes into trying to pass a level — but the moment you run out of continues, that’s it, game over. 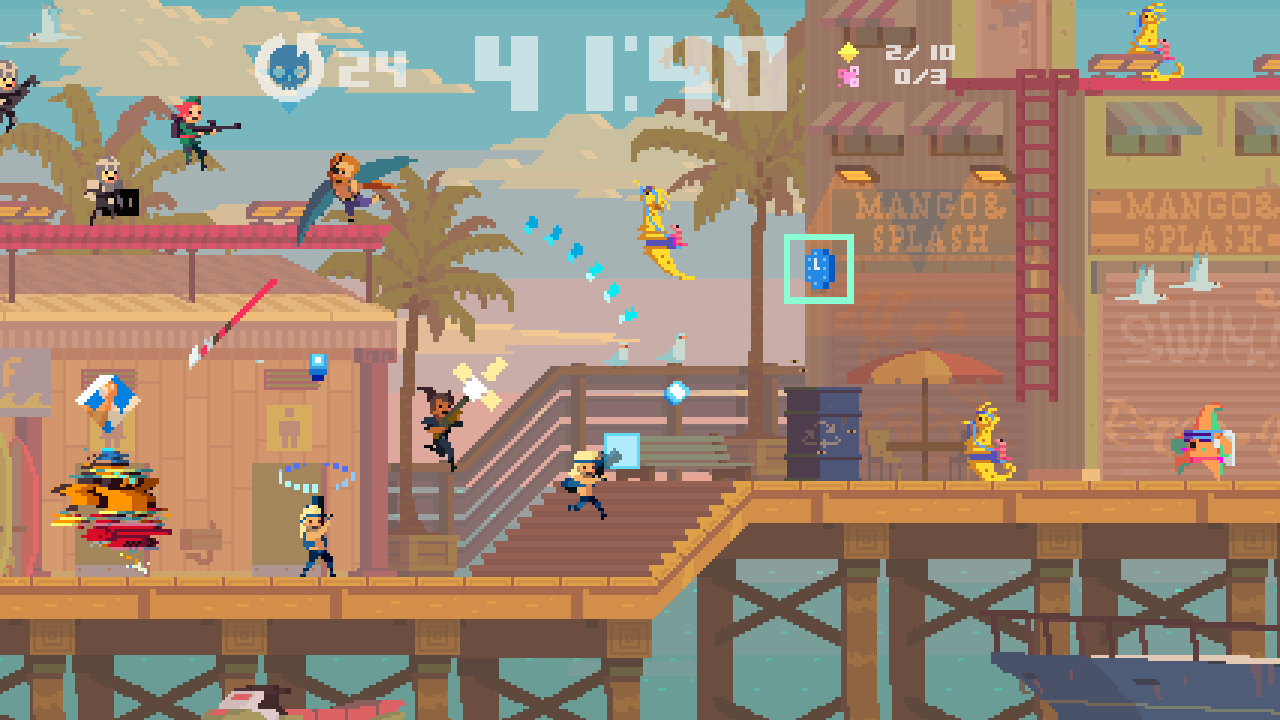 Despite the sour taste the second last level left in my mouth, I still think this is a really awesome game. If you don’t have anything to play on your Xbox One or Xbox 360, it’s definitely worth checking out.