Space is vast and endless, full of opportunity. What better way to use the openness than to run cargo across it? Space Run is a tower defense game that bears no real resemblance to anything in the genre. You are on the move, going from left-to-right while being attacked from various enemies as you make your deliveries. It gives the game a natural feel of protecting your cargo while trying to get it to the next space station in tact. 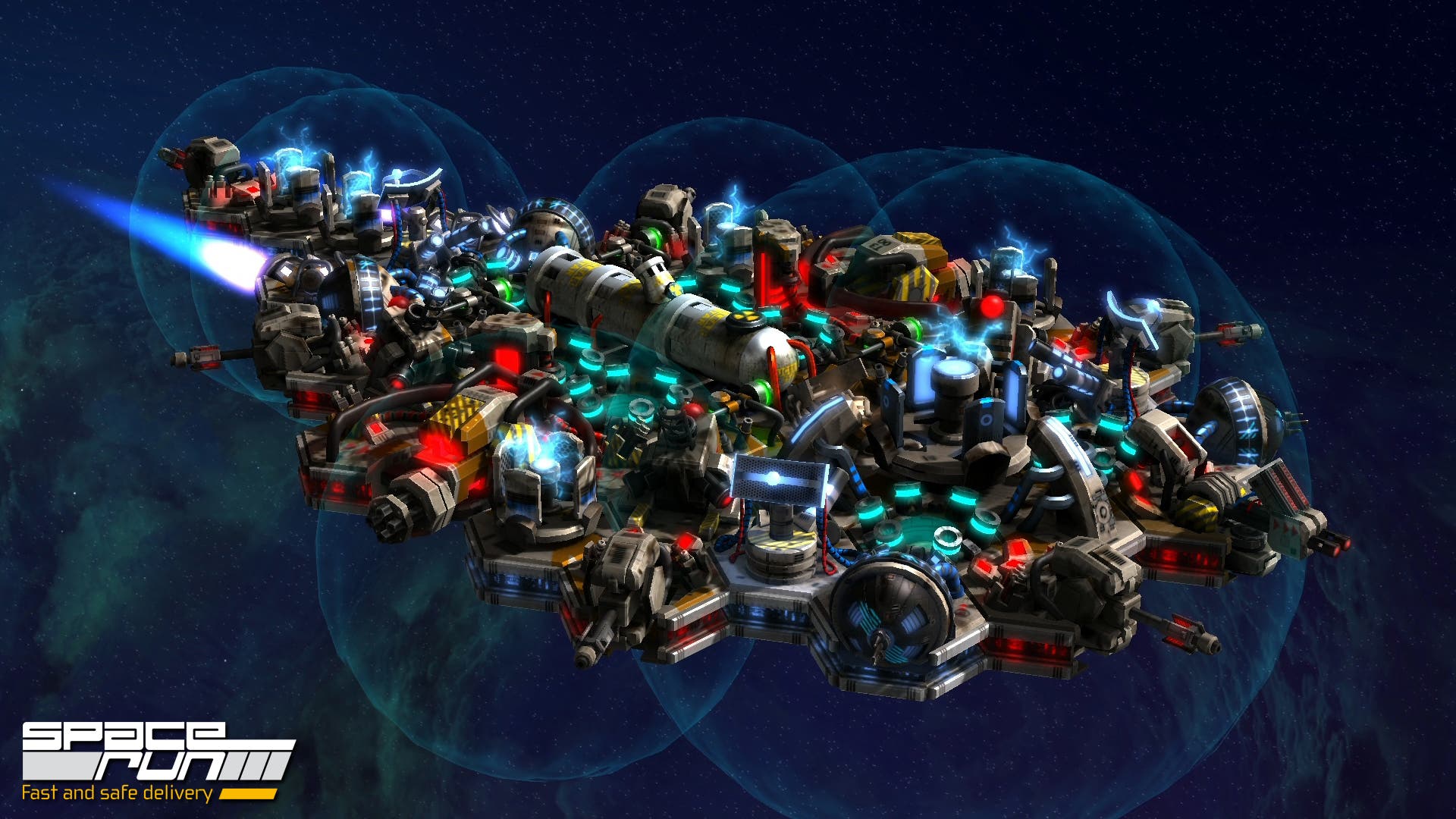 The story is a bit cliched, but somehow fitting. You are Buck Mann, a space trucker who can transport anything “fast and safe”. Five companies are vying for your business and are willing to pay you top dollar for getting their items delivered on-time or better. You’re not alone in this, your British-accented android co-pilot, Adaam-12 joins you. Although, he sounds like he should be your butler instead. Cutscenes feature lengthy chat sessions that have some really funny dialogue in them, that makes them worth reading rather than just skipping before starting the next mission.

Before starting a mission, you can enter your hangar to construct your ship as you see fit, based on the items you have to transport. You’ll be given strategic freedom to place them anywhere on the hex nodes. But you have to place them in such a way that a shield can protect them, or otherwise not get destroyed or risk losing the mission or worse, not making as much money from the run. 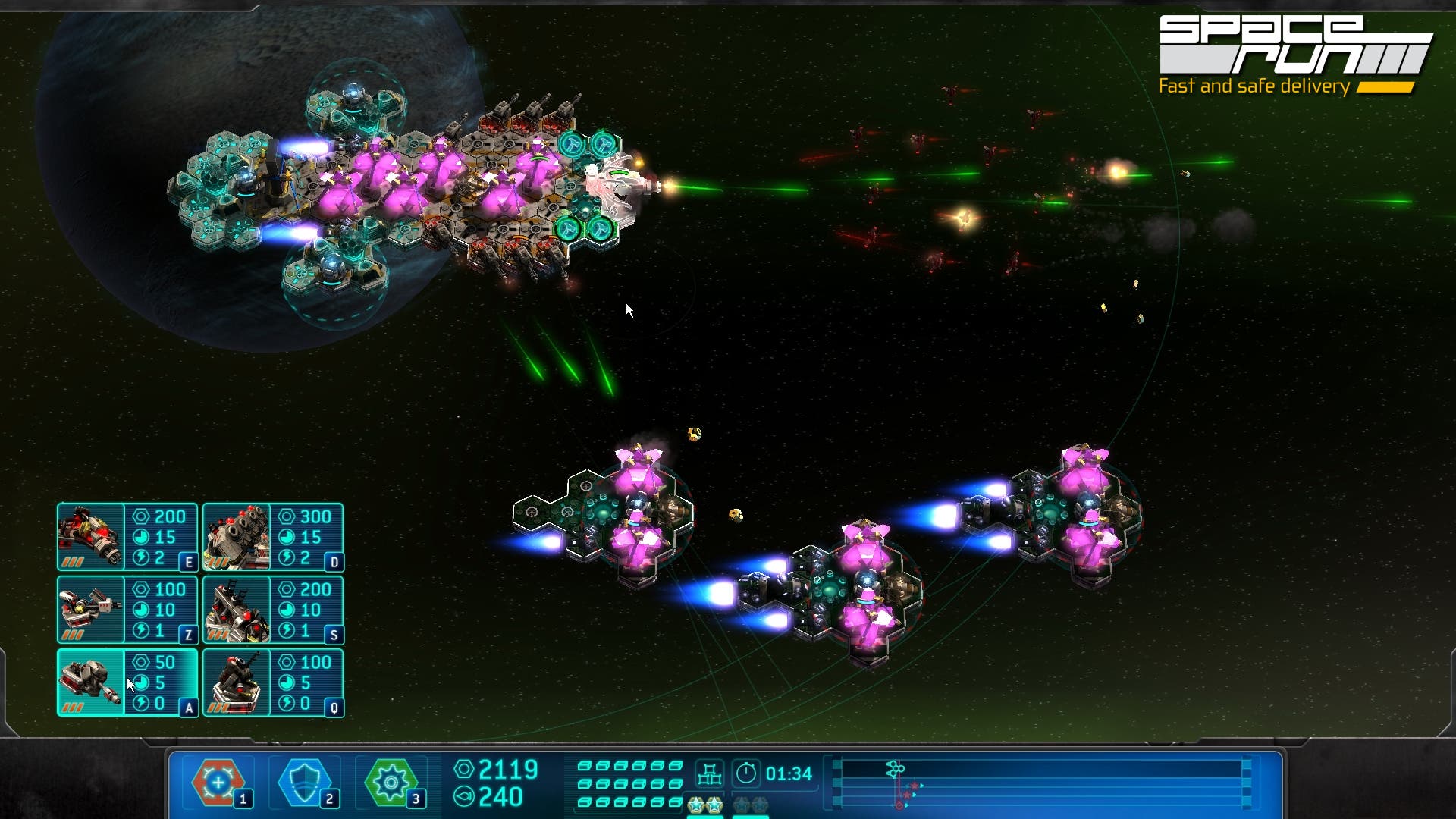 There’s a par time that must be beaten to earn all five-stars in the rating category. At any time during the mission, you can see where you rank against the clock. This will tell you whether you need to install more engines to make the time. Earning stars is a means reputation which gives you more missions. Replaying levels has a two-sided benefit of increasing the score which in turn nets you a better reputation. It’s also just fun to go back and destroy the easy competition and have that perfect run with no losses.

Space Run doesn’t have any difficulty options in the game, but over the course of the 30 missions or so, deliveries become harder and harder with twists and turns, and less time to do any of it in. Hazards like incoming asteroids, pirate attacks, and boss battles give the standard run its challenge and variety. I never felt prepared enough for any of the incoming threats at any time and always just scraped by until I got better equipment, and was able to go back and do better. 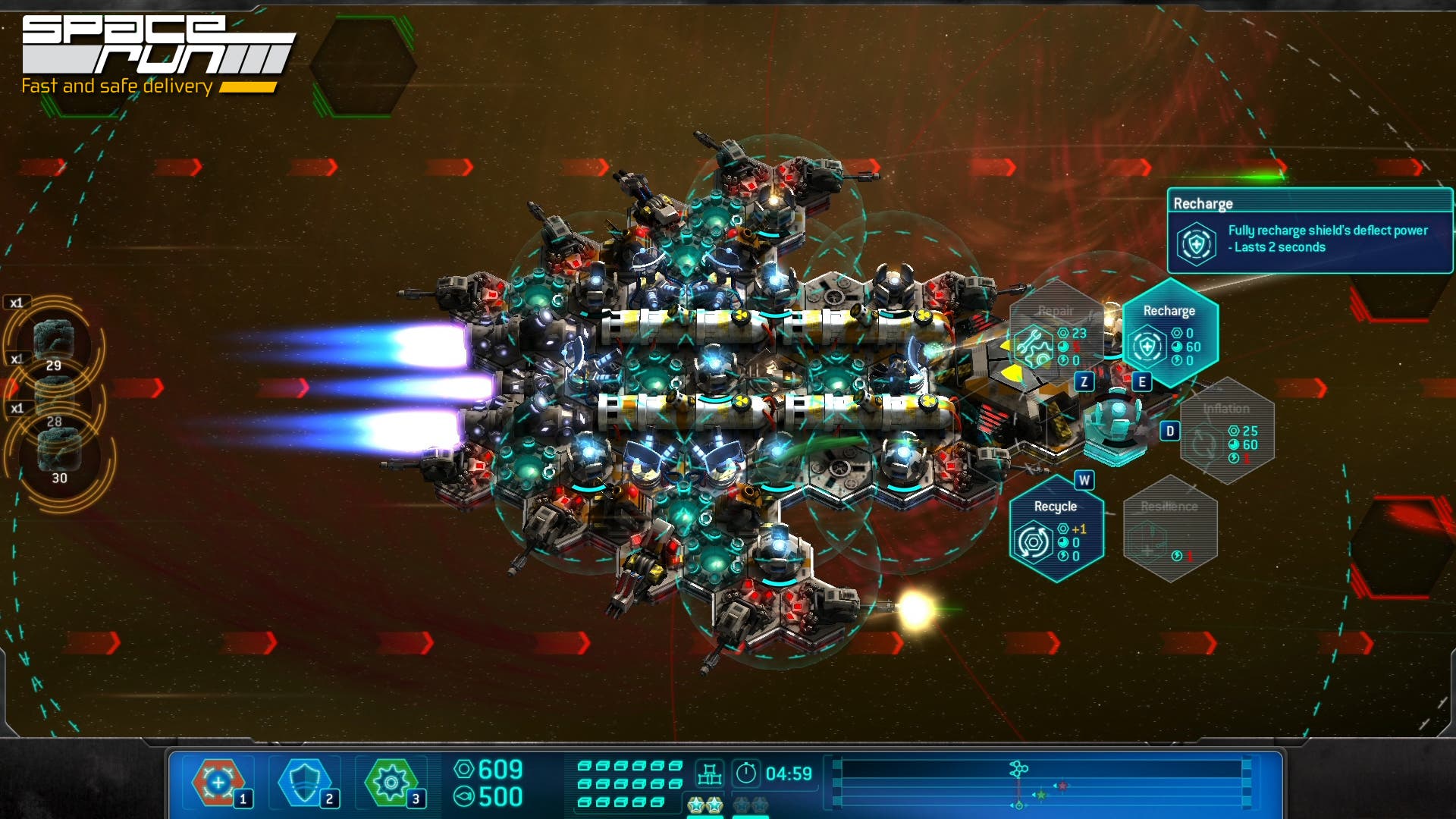 Once you have departed the space station, you must outfit your ship with weapons, and if there’s enough cash, shields as well. It would be nice if there was a way to pause the game and install or remove items, but the tension is certainly amplified by not having this. As you destroy incoming threats, you’ll collect booty that can be used to perform the on-the-fly upgrades.

Upon delivery, you’ll earn credits which can be spent buying new equipment, or upgrading  existing equipment. At first, you’ll only have laser turrets, but over time you’ll unlock missile launchers and shields, and the like. Soon you’ll go from having a basic runner to a full-on battlecruiser that so happens to transport cargo. It’s great watching the evolution of your ship designs manifest to use the space and weaponry efficiently.

While Space Run features a lot of familiar elements found in the tower defense genre, it disguises them so well, that every encounter plays out so organically. It’s customization and gameplay encourages replayability. It is really rewarding to earn every star you missed. Space Run is a standout tower defense title that shouldn’t be missed.