NHL 2K returns, but only to Mobile

2K today announced the hard-hitting action of the NHL is returning to mobile devices with NHL 2K. Co-developed by Visual Concepts, a 2K studio, and Virtuos Games, NHL 2K will arrive this fall for iOS and Android devices as a premium mobile game for $7.99.
NHL fans and mobile game enthusiasts will enjoy NHL 2K’s enhanced graphics and compelling new features, including a detailed My Career mode; fast-paced, three-on-three mini-game; and first-ever multiplayer options, allowing fans to play in a turn-based shootout against their friends. In addition, the NHL 2K universe will continually expand with roster updates, enabling players to routinely add new talent to their teams as they compete to win the highly coveted Stanley Cup Championship. 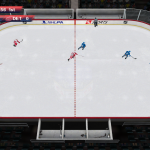 NHL 2K will be available for download later this fall from the App Store, Google Play Store and Amazon Appstore for $7.99.