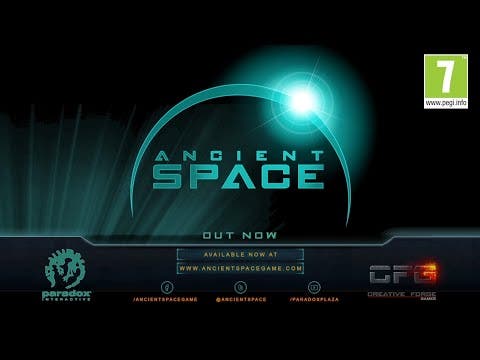 Paradox Interactive today announced the galaxy-wide launch of Ancient Space, a new real-time strategy (RTS) game from developer Creative Forge. Featuring deep strategic gameplay and starring a cast of fan-favorite sci-fi actors from film and television, Ancient Space will challenge gamers to navigate a suspenseful single-player story campaign as they guide their fleets beyond the edge of the known universe. Purchase of the game, which is available at digital retailers for $19.99, includes a digital art book and the game’s original soundtrack. Ancient Space is available today for Windows PCs with a Mac release coming soon.

Purchase Ancient Space from the galactic merchant of your choice here: http://www.ancientspacegame.com/buy/

Explore the mysteries of Ancient Space in a gameplay video with developer commentary, showcasing the game’s strategic resource management and ship navigation:

Ancient Space is a single-player, real-time strategy title that puts the player in command of a fleet on the edge of the known universe. Tasked with charting what lies beyond in ‘The Black Zone,’ players must carefully manage their resources to build and upgrade their fleets, and survive deadly strategic missions as they find their way through a rich and compelling story with an all-star cast of characters. Mission objectives are many, varying from exploration to stealth, from assault to defense, all played in real-time strategic gameplay.