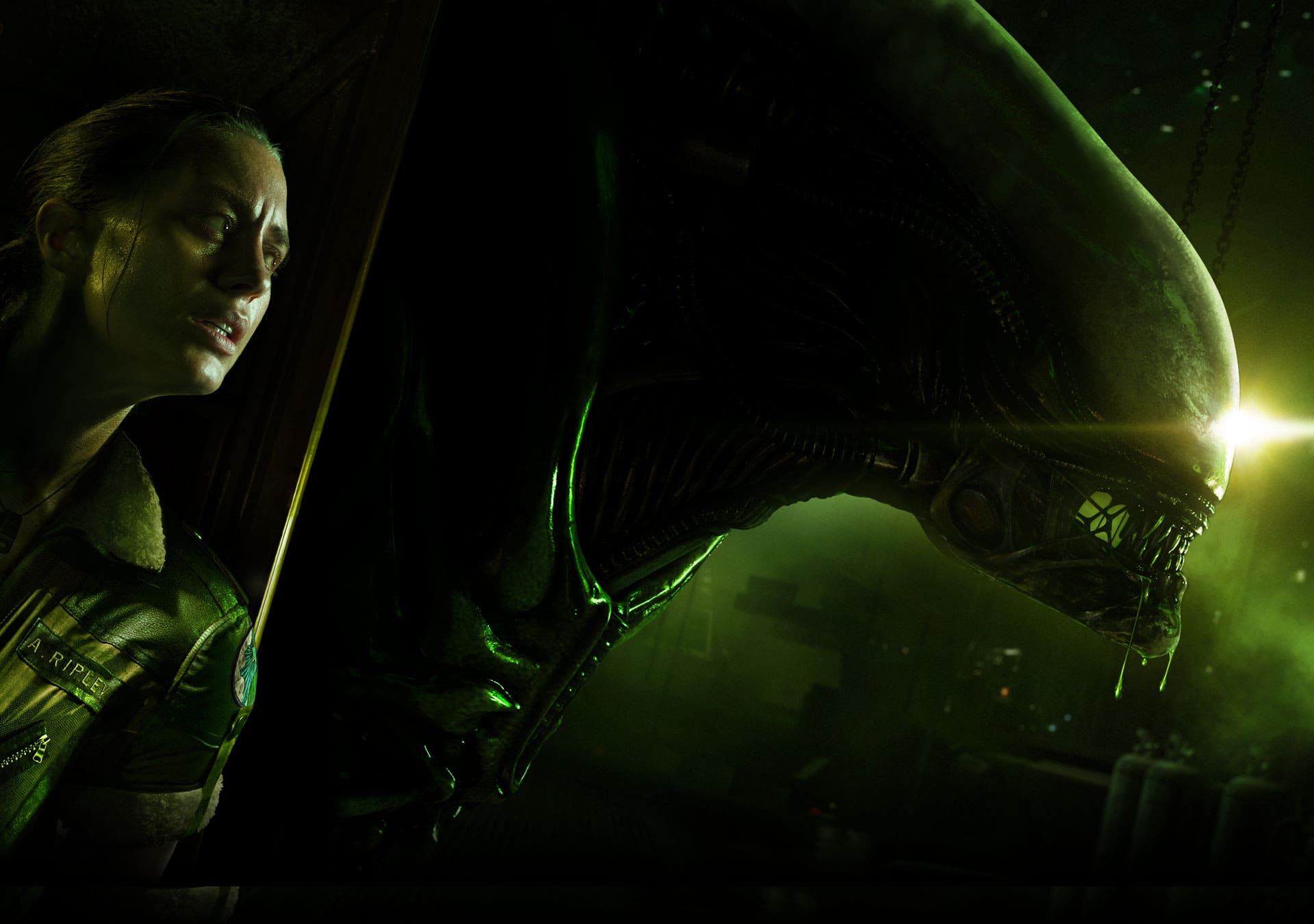 In horror movies, when the sole survivor of a murderous killing spree is running for their lives, you find yourself shouting at them. They always wander into the wrong room, go up the stairs when they should be going down them, run loudly down a hallway, or otherwise behave how you would least expect them to. In Alien: Isolation, you are that person. You’ll be panicking, bumping into things, and running loudly down a hallway yourself. You’ve become what you’ve hated to see, and you’ll be repeating those types of mistakes over and over again.

Firmly planting itself between the events of “Alien” and “Aliens”, Alien: Isolation places you in the boots of Amanda Ripley, the daughter of Ellen Ripley. Amanda Ripley is a near carbon copy of her mother. It is clear that Amanda is here by choice, wanting to learn about her mother’s disappearance. Boarding the soon-to-be decommissioned Sevestopol to retrieve the black box of the Nostromo, things assuredly go from bad to worse. Before you even arrived, a xenomorph has been aboard, slowly picking apart the skeleton crew that remains. The Ripley’s, believe it or not, cannot catch a break. This xenomorph’s unhealthy obsession with tracking you down and wanting to kill you is unrelenting. A running theme throughout the game.

Tension builds up pretty quickly, once aboard the Sevastopol. The early chapters teach you the basics in non-confrontational environments so that you aren’t scrambling when it matters. At the eventual reveal of the xenomorph that’s been terrorizing and killing aboard the Sevastopol, it’s a kind of release that is absolutely goosebump raising. Horror games of the “AAA” nature often fall flat at making you genuinely fearful of what wants to kill you, and perhaps the familiarity of the alien could be what makes this work to such a great degree.

Immediately upon starting the game, you’ll notice how well Creative Assembly studied the “Alien” aesthetic. They perfectly recreated the look and atmosphere of the 1979 classic, down the the technology being presented as something from the future that could only come from the 1970s and 1980s – Including an adjustable film grain, makes the game feel a little more cinematic and gritty.

Which brings us to the save system. It’s as antiquated as it looks and behaves. It works to great effect in the sense that it feels like it belongs among the VHS tapes, reel-to-reel audio recordings, and CRT monitors that are aboard the space station. It takes about three seconds to actually trigger the prompt to save. With no autosaves or checkpoints, you can spend 20 minutes inching your way to an objective, and just when you think it is safe, you get killed. The game dutifully warns you when the area is not safe to save. I had made substantial progress, unwilling to wait any longer, and so I decided to save and was immediately pierced through the torso – only moments from having an updated save. This perhaps illustrates the point, you are never safe. 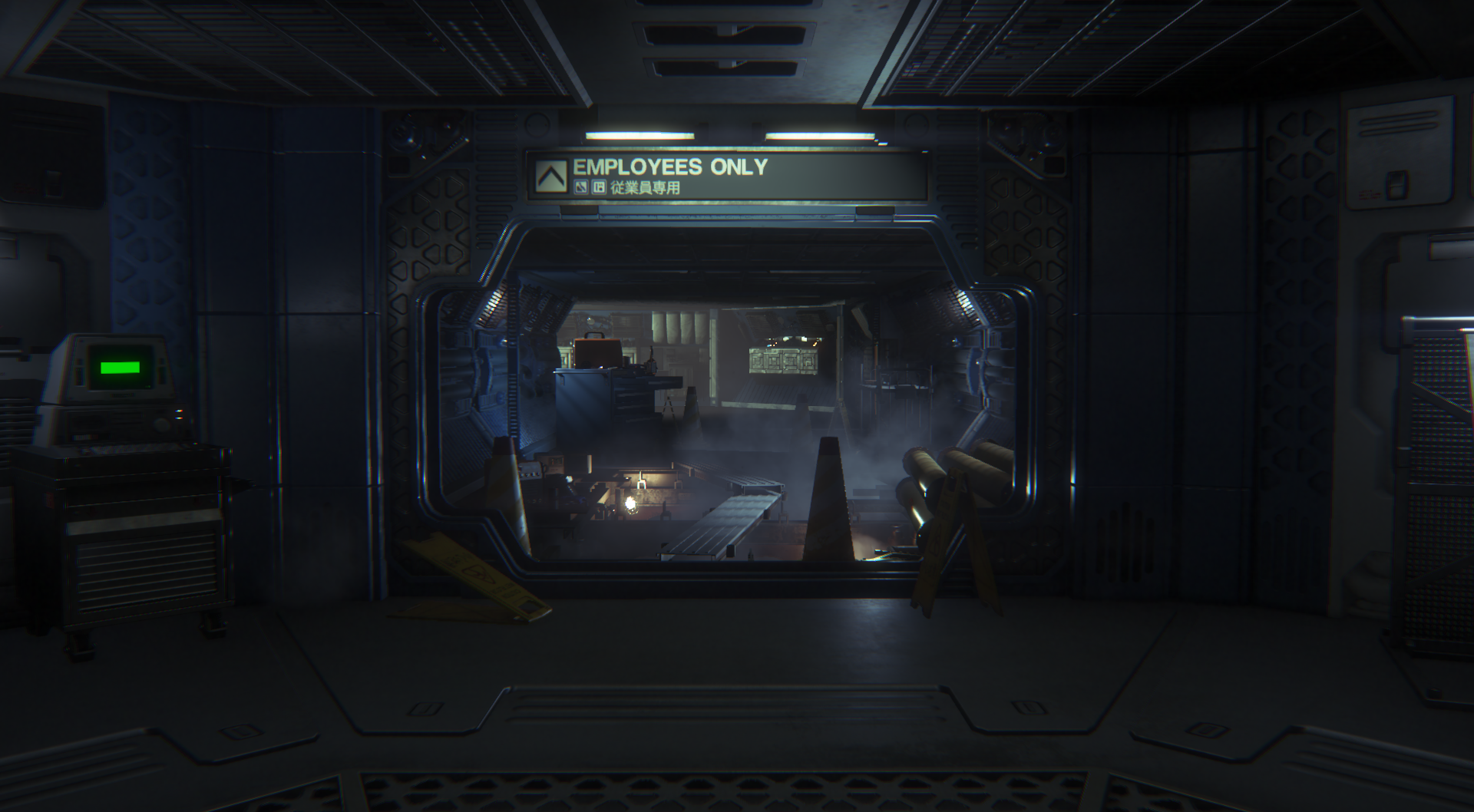 Alien: Isolation is a horror stealth game where being caught by the alien, means instant failure. Simply being caught and killed isn’t horrifying. Being underpowered and hunted through nearly the entire game that weighs heavily on your heart, is. Shining moments arise when you are able to outsmart the xenomorph, even if it’s just for a few moments. Alien encounters are incredibly tense, whereas human encounters devolve into bashing fits, and even android encounters just become sprinting exercises. The variety of introducing something else helps keep the xenomorph from being overbearing or otherwise too prominent, but it still stalks you through most of the game.

The flamethrower is your ultimate “go away” device for the alien, as it will scurry away. Androids however, will only proceed through the flame and continually try to help you in your time of distress. You can knock out humans with your wrench when extremely up close, shoot a revolver, or even use a stun baton. But no weapon feels truly offensive. In fact, all the game’s weapons have the potency of firecrackers. This is fine, it just exemplifies that you should be using stealth most of the time. Improvised weapons come at the hand of blueprints found in the environment. While reaching your objective is the way to go, spending time to explore every room will be rewarding to be able to craft new items.

Smart players will be crouch-walking their way through the Sevastopol station. As you creep about, you’ll come across computers that can be hacked to read journal entries, listen to audio files, and access utilities that can open locked doorways. Often you’ll be given a passcode, but it isn’t recorded to some journal. You have to remember it yourself. The first time I instinctively thought the passcode was recorded somewhere, or I could recall an entry, or even an on-screen prompt would remind me. It never showed, I couldn’t find it. I had to return to the room where I read the code and had to regretfully make my way back to the locked doorway again to finally get it open to progress. This isn’t a complaint, I enjoyed the game making use of my short-term memory for something meaningful.

Some odd occurrences, though rare make the alien’s AI seem too inconsistent. Sometimes the alien looks right at you, stopping your heart from beating, but oddly moves on. Other times it walks into a room, unaware of your presence and as you walk past, it immediately tackles you and delivers the killing blow.

Alien: Isolation challenges you to be careful, methodical, and cognizant of your surroundings. The alien is party pooper, eating your time and patience, forcing you to replay long sections between saves. Each failure was an opportunity to do better. And I became a better player for it. The game’s length is admirable, but too much. You grasp at the ending several times, but often it is snatched away. How long you endure your time with the game depends on the amount your heart can take during each play session. Creative Assembly’s vision of the “Alien” universe makes Alien: Isolation is a great representation of a videogame mimicking and capturing a film’s tension and atmosphere in quite a long time.

A Steam code was provided by SEGA for review purposes