Chances are, you’ve never played a real-time strategy game with a narrow focus on the Battle of Gettysburg during the Civil War. Sid Meier’s Gettysburg! in 1997 was in my mind last good game to center itself around this battle, and many would consider it the “gold standard” in wargaming during the Civil War, but it’s been far too long since that game. Nick Thomadis, creator of the DarthMod for the Total War series is taking his shot at the major historical battle as Game Labs, by recreating Gettysburg with interesting freedom of choice with Ultimate General: Gettysburg, one of my now-favorite wargames in recent memory. 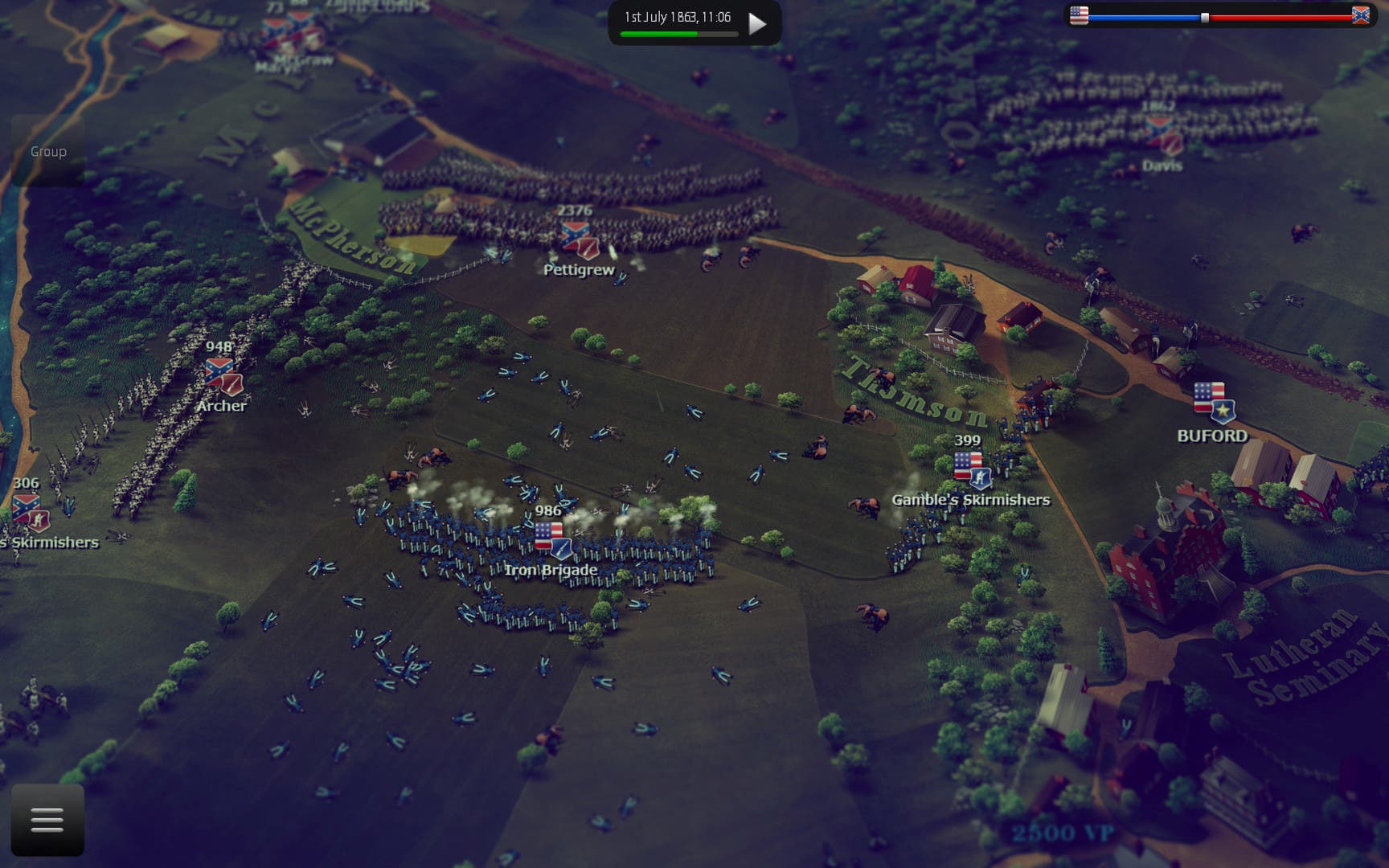 Gettysburg, Pennsylvania is where the South’s advances to invade the North were stopped. The Confederate Army had suffered substantial losses, as did The Union. The grand total of losses between both sides made it the most casualties recorded in all of American history. The strategies involved from both sides made great use of the terrain, manpower, and efficiency. With only three achievements, it is clear the focus of the game is not about performing specific feats or reaching arbitrary goals, it’s all about strategy.

Ultimate General: Gettysburg is historically lenient, allowing you to play both sides and potentially emerge the victor even if historically they did not record The Confederates as winning. But the game allows for this to happen should you do enough to use your army of larger numbers to great effect. What if Cemetery Hill couldn’t be defended and was overran? What if on the third day the Confederates were not repulsed, and the battle continued into a fourth and final day? The game explores these “what if” scenarios to great detail and, feels natural. Even if you go wildly outside the textbooks, the game manages to be fun, tense, and completely engaging from beginning to end. 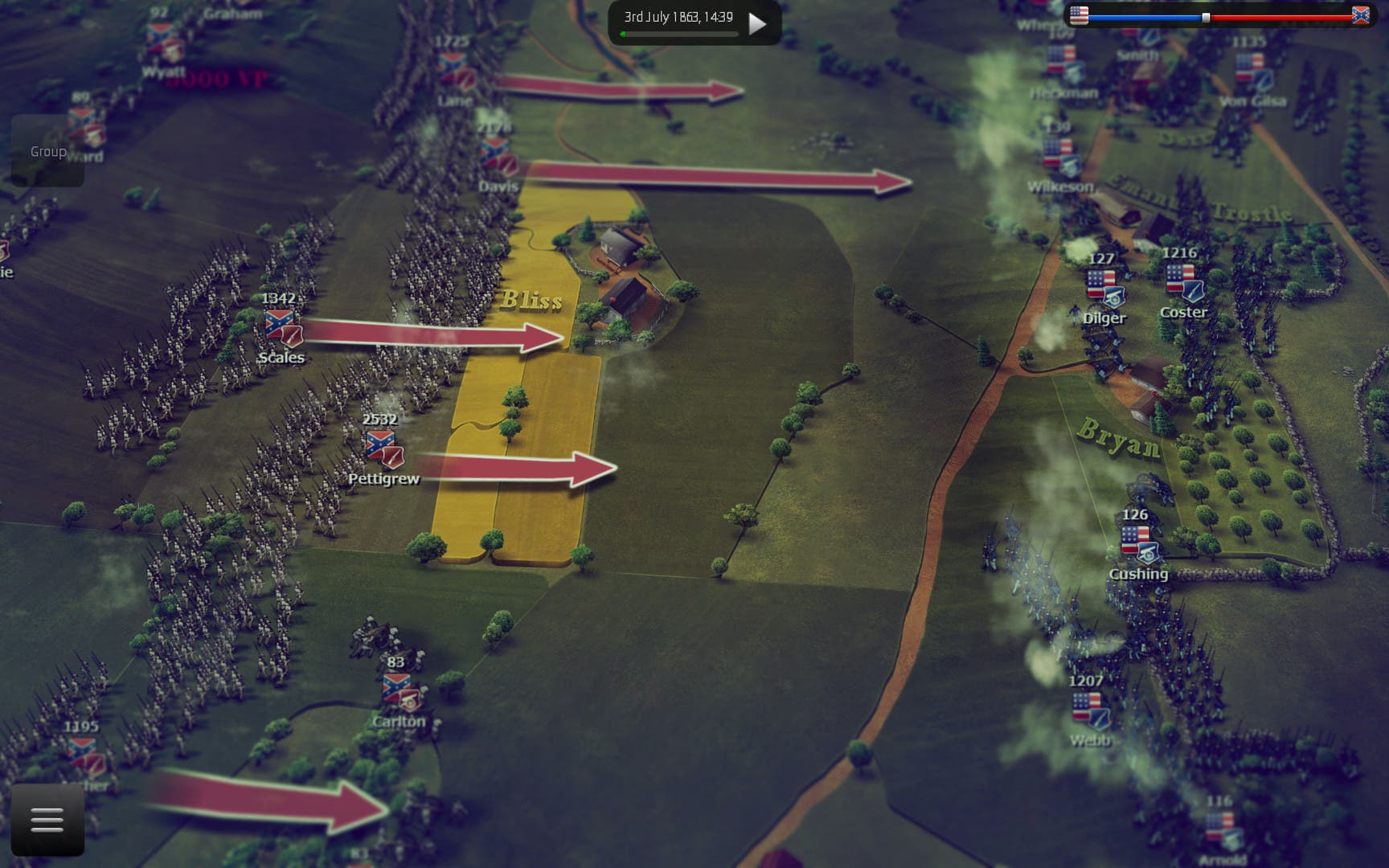 There are only tutorial videos to show you the basics, as there isn’t anything in-game to transition you into the game, proper. Thanks to Ultimate General: Gettysburg‘s clean UI, and there’s no base building, tech trees, or even producing units. It sounds simplified, but it’s anything but. The game’s difficulty is dictated by nine personality traits that will serve as the difficulty of the game. This gives you a customization of how you want the opposition to think and react to your decisions. For instance, you can set the difficulty to “easy”, but also make the opposition aggressive. You’ll be often charged and attacked frequently, but they are easy to repel. So there’s a balance and a sense of being overcome, but if you’re not that good of a strategist, you may normally lose. Here it gives just the right amount of challenge.

Similar to a touch screen interface (and the game’s aspirations of landing on iPad soon), you’ll control your units by painting lines onto the map that will path the thousands of soldiers. Messages help bring attention to new units or capture points. Positioning absolutely matters, but it is hard to place units precisely for quick turning, or selecting more than one unit at a time. When selecting brigades or regiments allow you make them run, charge, or even retreat.

Morale and condition come into effect, working in conjunction with one another. Simply having more units does not make for a decisive victory in an engagement. Your condition can be lessened by running too often or even walking too far. And being too far away from reinforcements can be costly. The artificial intelligence driving both sides are incredibly smart. Units will rout, withdrawing from the ensuing battle and will not let themselves succumb to being slaughtered. Retreating units cannot be selected. It’s laughable to see that in their minds, “all is lost” and they have to gather themselves before re-entering the battle. 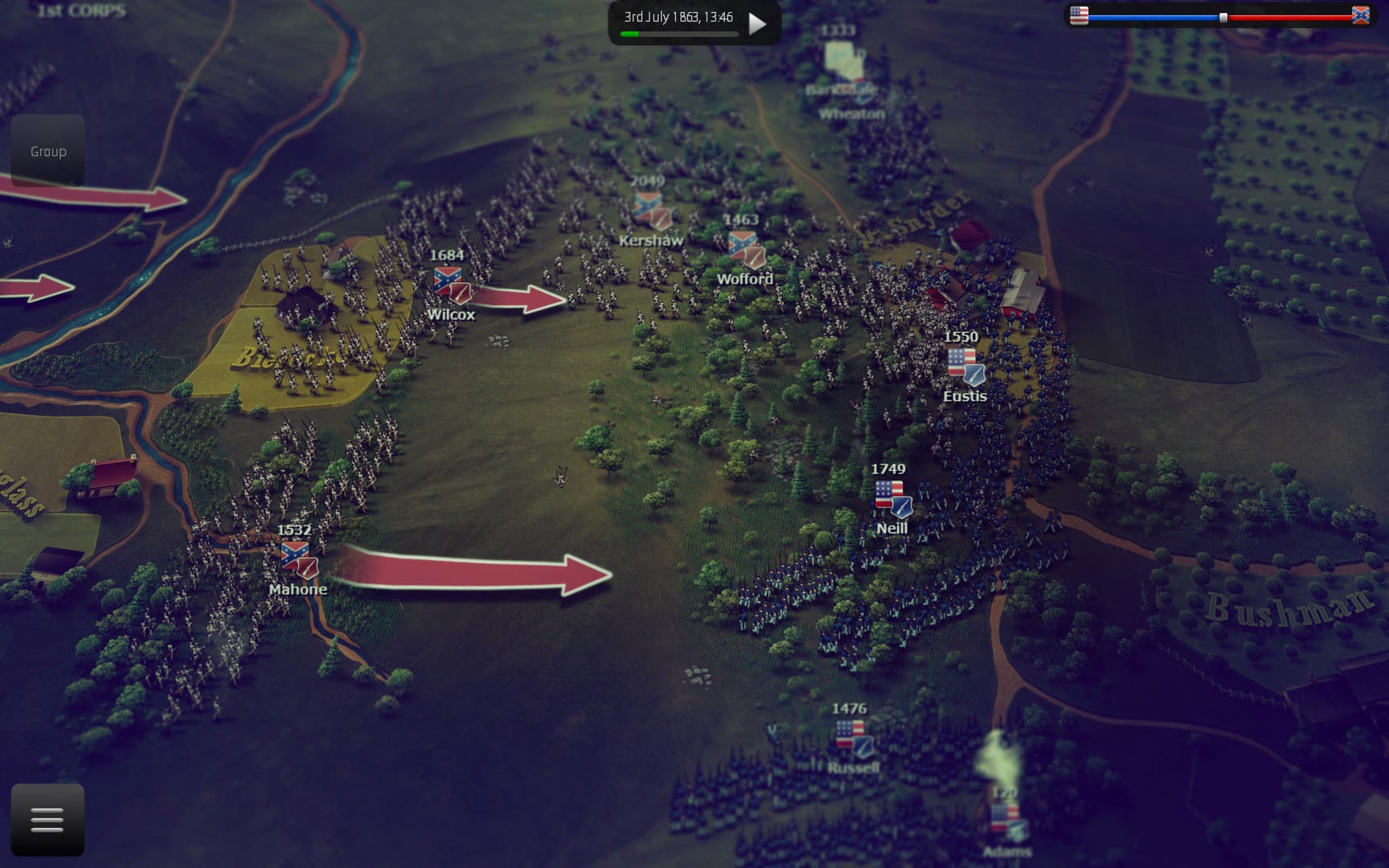 The real Battle of Gettysburg lasted three days. The way the game handles this, is by sundown the day is over. There’s a green timer that spans the day, and even dispatches units at the exact time of day they are believed to be sent. If a battle is delayed by charging or being engaged in some other manner, a red timer runs its course. Once fully expired, the tug-of-war battle is stopped. You then enter an intermission screen, appearing in a faux-war room to determine the next course of action. And it is here that you maintain historical accuracy, or choose to deviate and even prevent losses or turn the tide of battle quicker. And once the next day begins, depending on your choices, your units will be fresh and placed where they are supposed to be. In order to be successful, “Victory Points” are historically relevant and are essential to winning – a term that is used loosely when talking about Gettysburg.

Each game is different every time you play, and makes replayability even on the one map feel completely different from one another. And being able to play both sides really adds depth, and a show of compassion to the North and South of the Civil War.

Line of sight is not just a fog of war, it’s clever and a model that developers making a real-time strategy game going for realism should aspire to. If the enemy sees you running into the trees, they will fire into them with cannons or rifleman, but you will have cover into the trees, reducing the chances of being hit. 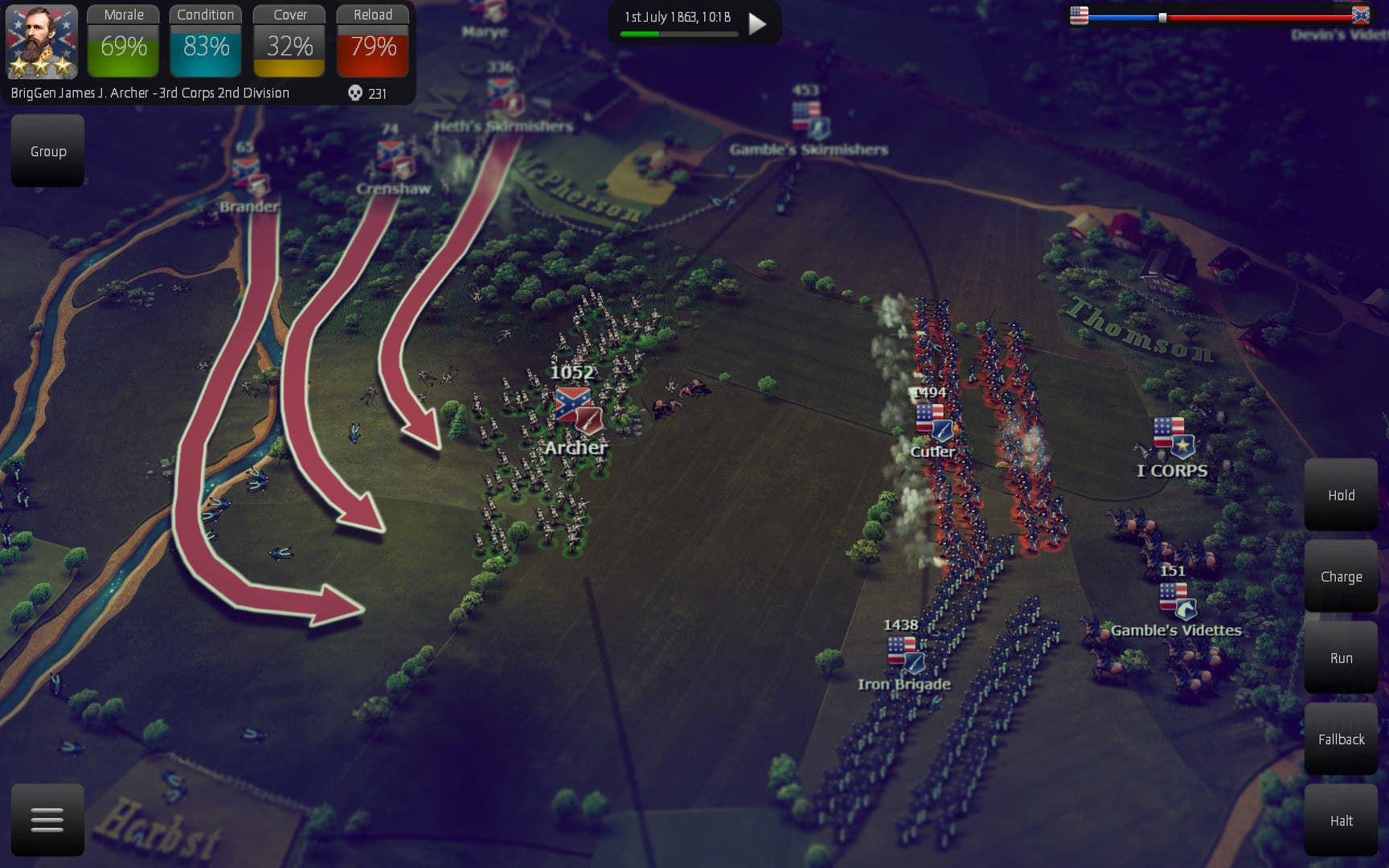 Ultimate General: Gettysburg is beautifully rendered thanks to the Unity engine, giving a look that’s right out of diorama or living map. Sadly, when engaging with cannon units, the environment doesn’t react, deform, or leave any scarring from what’s happened. But beyond that, the simply animated units move smoothly and cohesively and portray the numbers above their heads.

Multiplayer is tense, there’s no chat or any way to communicate except with units. The simplicity is in its design. It’s just you and the enemy, moving your units in a war of attrition or other modes you select from any scenario from the Battle of Gettysburg. 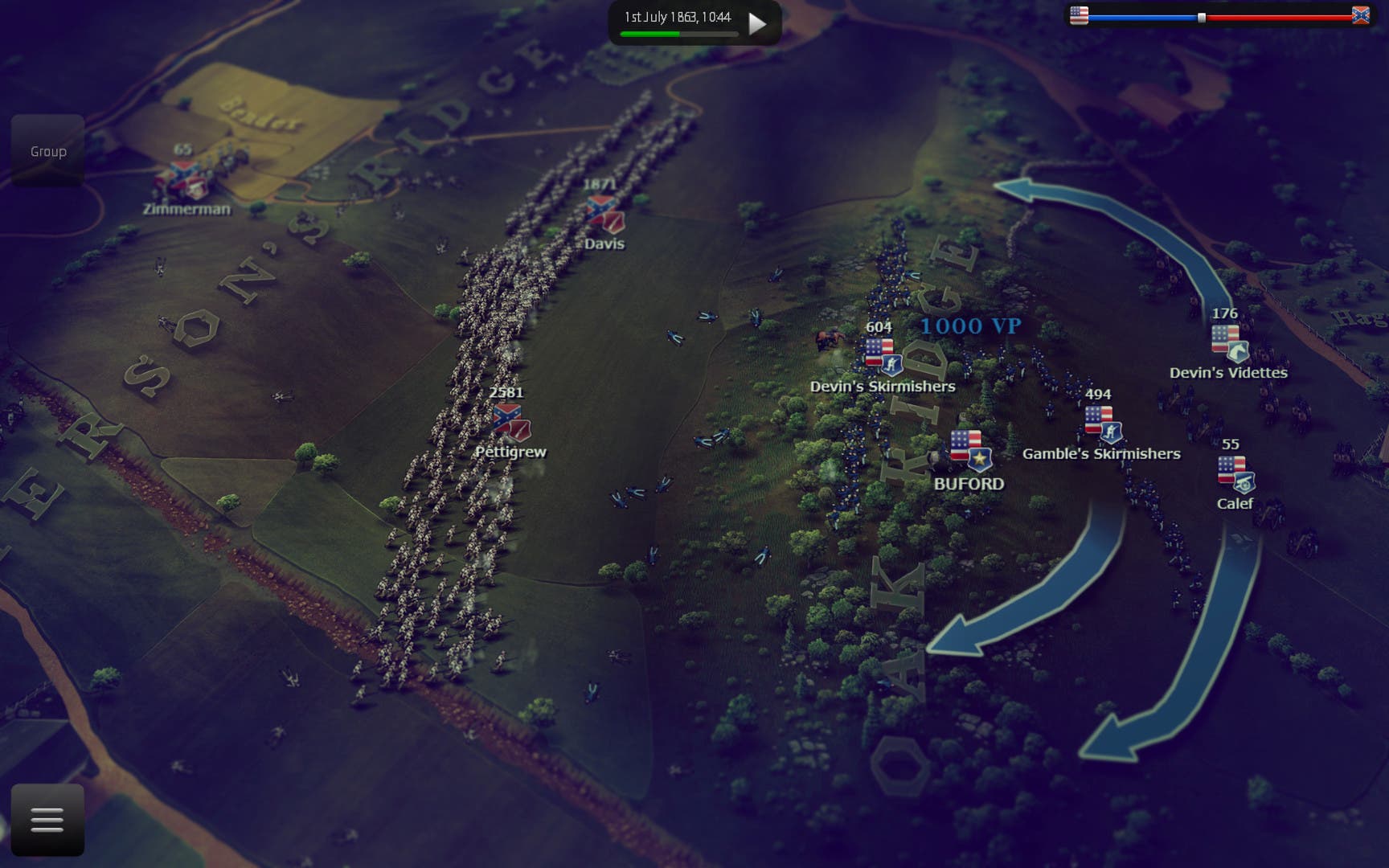 Ultimate General: Gettysburg lives up to the name, making you feel as if you were actually a general, where important command decisions can be made, whether historically real or fictitious. This is a wargamer’s dreams realized. Even if Gettysburg isn’t your historical battle of choice, it is one you should not miss playing. Game Labs’ vision of Gettysburg a blueprint for the future of the Ultimate General series to succeed going forward, and presents the RTS genre with new and exciting ways to play that I enjoyed so thoroughly.