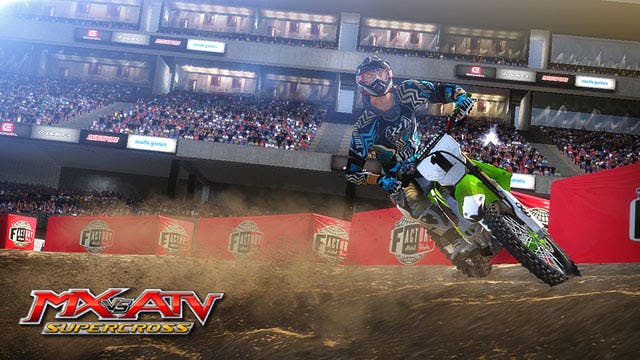 MX vs. ATV: Supercross is Out Now, courtesy of Nordic Games

The wait is over! THQ’s lost treasure, MX vs. ATV: Supercross, is out now, courtesy of none other than Nordic Games.

Available on PS3 and Xbox 360, MX vs. ATV: Supercross is the sixth[KG1]  game in the series and brings players the ultimate in dirt bike action, featuring a host of game modes, customisation options and everyone’s favourite riders, old and new.

“MX vs. ATV: Supercross is the first in what we hope to be many more games of this former THQ brand, now brought under the Nordic Games umbrella,” says Reinhard Pollice, Business and Product Development Director at Nordic Games. “We’re thrilled to finally give fans what they’ve been waiting for and look forward to doing more of the same in the future.”

“Launching MX vs. ATV: Supercross is rewarding to the Rainbow team on several levels,” says Ken George, Executive Producer at Rainbow Studios. “It’s exciting to bring the series back to our fans who want a fun, rewarding off-road racing experience. It also feels great for Rainbow Studios to have a new home at Nordic Games.  Everyone there is truly great to work with and we’re glad to be part of their family.”

The game features 17 different Supercross tracks for both MX and ATV riding, as well as a career mode with five different series. 80 motocross companies are featured and there will be 60 riders to race against, ensuring the ultimate in authenticity.

Multiplayer also makes a true return to form, with up to 12 players able to participate online and also a two-player split-screen functionality, as well as regular content updates.

MX vs. ATV: Supercross is available today from all good retailers on PS3 and Xbox 360.