Etherium does a lot of things: galactic battles, real-time strategy, and random weather encounters that changes the flow of combat. But it does none of them particularly well. There’s a neat concept that’s foiled by its execution. It’s a shame to see a new real-time strategy game buckle under its own ambitions. While Etherium is competent and functional, it is very dull on delivery. 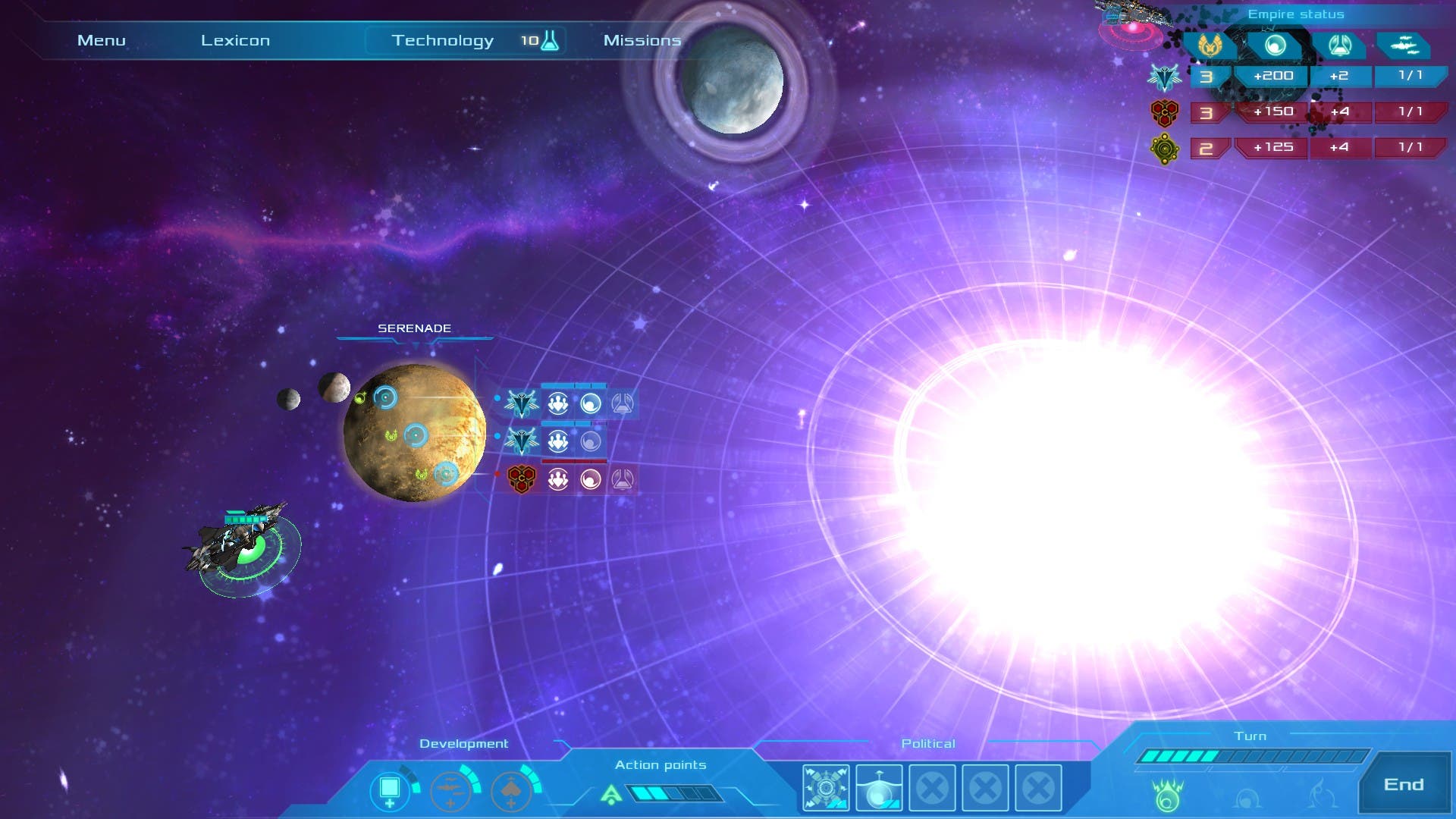 Three factions are seeking out the mysterious resource known as etherium, much like the tiberium in the popular Command & Conquer franchise. The initial cutscene that plays gives a glimpse at the personal conversations that happen in this universe and introduces the Intar and Vectides. There’s also a secondary faction that only exist on planets, and are native to these worlds and take concern with anyone encroaching on them. Beyond that though, Etherium does little to bring you into the conflict, or wonder why you should even pick a side.

The Conquest Mode is the core to Etherium. It is here, a multi-layered game awaits you. At first, you are in space to do galactic battle, move your fleet, play political cards to your benefit, and/or spend technology points to advance your fleet’s abilities that take affect the ground. You’ll see familiar planets like Earth and Mars, but then do battle at neighboring planets like Serenade and Desta Fatalis, with a total of six planets. There’s no explanation as to how far away you traveling, but they all seem relatively close to one another.

The aforementioned political cards can prevent an enemy from making a turn, or will bribe any of the secondary factions towards becoming an ally. These use action points when activated, so there’s a bit of strategy involved on what to use, and when. The technology points that are earned. The entire conquest mode is represented by number of turns and eggs. There’s a portion where eggs will go through stages of where etherium will be found and gives an evolution of the conquest mode. This all happens in the course of a couple of hours, depending.

After you’ve made your turn, it’ll be time for each of the two AI factions to take their turn. This is an overly lengthy portion of the game, where several minutes go by. Minutes. Enemy turns should be nearly instantaneous. This is an excruciating waste of a player’s time to have to sit through this, especially when nothing is moving on-screen. 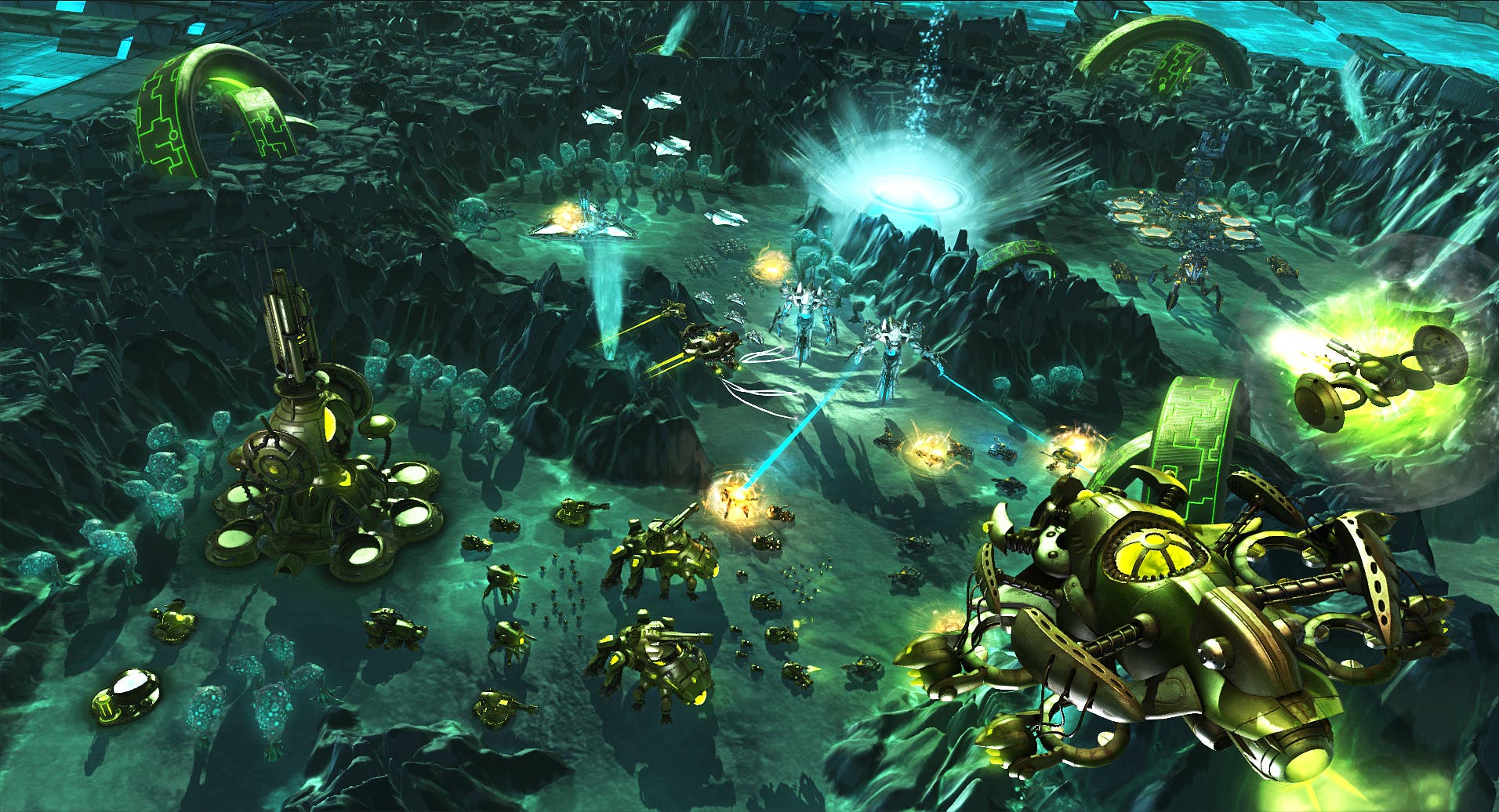 There is an option to engage in a space battle, whereby the instigator will fire first, and then a retaliation shot that is returned automatically. Sometimes they miss, sometimes they don’t. There’s no clear indication what percentage you have of hitting before you fire, making it an annoying dice roll. They are almost unnecessary too, as they aren’t particularly interesting or memorable. They are just these stiff animations of two ships firing at each other, then stop because they have exhausted their action points.

Once a planet has been contested, you’ll be called to battle. And there’s no way around it, no forfeit or otherwise diplomatic way to excuse yourself from fighting.

On the ground, the game becomes very familiar for those who have played real-time strategy games at any point in the past decade. You’ll need to send out comms units to create a “station”, and then you can capture etherium, the resource that allows you to generate more units. Every battle starts off the same way, and you’ll be repeating this process ad nauseum. Requesting units always feels like a click too many. To get a specific unit you want, you have to slide out all these panels that just aren’t as fluid to navigate as it should be.

Turtling at your home base is not an option. You can gather your units together quickly, but you aren’t given much time before a faction has sent out units to track you down and start attacking. Luckily you can build turrets rather fast and efficiently so you don’t have to keep anything mobile guarding the main base. This forces the game to move at a brisk pace, which is appreciated.

Weather was an advertised feature of Etherium early on, but it doesn’t ever become anything more than an annoyance. Sandstorms reduce visibility even if you’ve cleared the fog of war, electromagnetic storms disable your ability to use your hotbar actions such as using the spy plane or raining down an orbital strike, and blizzards slow down your units. Sure, it requires you to react dynamically to the action, but after a few minutes, you can just resume as planned while you just sit back and wait the storm out.

Oddly enough, there’s no way to save while deployed onto the ground. You can only save your game while in space. Certainly an unwelcome choice by the developer to impose such a strange restriction. Battles don’t last for too long, but there were several times where I would have utilized such a basic option. The camera allows for all angles of viewing, so much so that I can look up to see a raging space battle. I wondered to myself, “when can I have that happen when I’m in space”? From the ground looking up, they look to be these grandiose battles that do not represent the actual conflict when in space. It’s as if the developer, Tindalos Interactive couldn’t bring that large scale combat to life and had to scale back.

I only executed one way to defeat an enemy on a planet, and that was just through annihilation. You can capture victory points and use orbital strikes to win instead. But for me, I spent some etherium to deploy spy planes to open up the fog of war to reveal where the main base was at. Once I had amassed a good number of units, I could transport them via airship close to the base, drop them and assault until they were destroyed. Then it’s a short cutscene of the base exploding, a victory screen, then back into space.

There is a Skirmish mode that’ll allow you to do battle wherever and whenever without the added layer of space that Conquest Mode brings. But it is a bare bones real-time strategy element that is fun for a few times, but everything is so samey.

Etherium in theory is something great and exciting. In actuality, Etherium is a bunch of ideas that never become fully formed in any capacity. Conquest Mode is a neat way to fill in for a more focused campaign, but the top layer that contains the space portion seems superfluous compared to the on-ground action, which is a bit tedious and repetitive planet-to-planet, where I never found myself having fun. I just wanted more from the game, and I never got it.