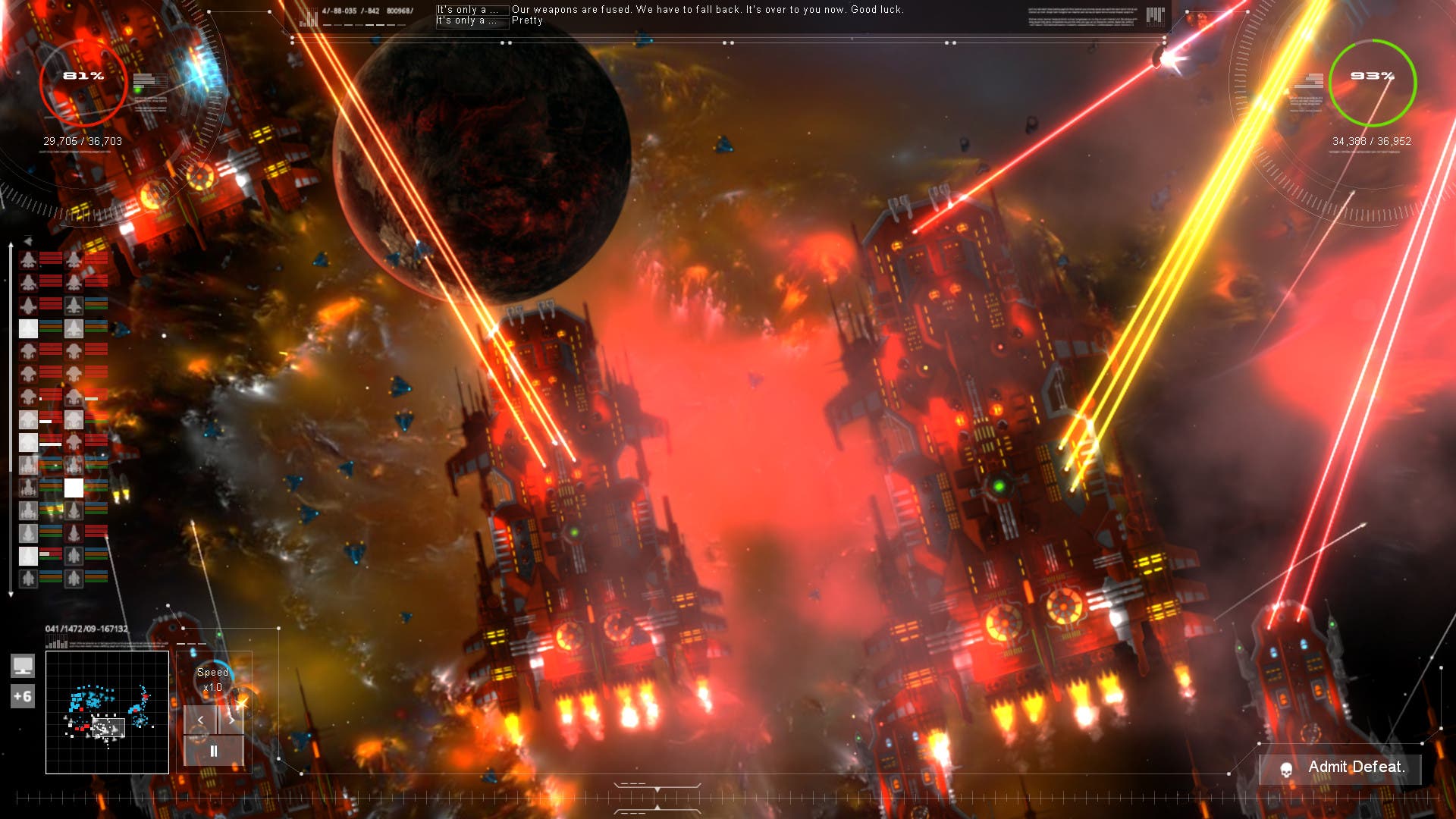 Gratuitous Space Battles 2 is the long-awaited sequel to the 2009 original. There’s a lot of customization, and involves a unique strategy to the gameplay. It does unfortunately have issues, some of them fixed from a recent patch, others that continue to cause problems. That said, GSB2 is still a solid game, and there’s nothing quite like it.

Gratuitous Space Battles 2 for the uninitiated, is a strategy game that’s all about the pre-game, or planning phase. You can deploy a fleet constructed of the pre-built ships and weapon designs, or create everything all your own. The time you spend creating ships, laying out designs, and the overall look can be spent in hours. The interface is clean and simple to use as it is all layers. Once satisfied, you send them into battle where you are not in control. Yes, it is a hands-off approach kind of game, where you don’t have tactical control, and you must sit back and watch your fleet head into victory, or into defeat.

Battles are played out either left to right facing, or top to bottom facing battlefields. It is very much a numbers game, but not everything can be won by brute force. You do have to strategize and place units together in formation to be effective. Fighters need to be close to their support wing, and so on. The varied ships across dreadnaughts, destroyers, and frigates all compliment each other in order to be successful.

The Galactic Conquest mode is the bulk of the game’s single player gameplay. It play just like the included Galactic Conquest DLC from the original Gratuitous Space Battles. In it, you hop planet to planet taking on fleets of ships against a difficulty of your choosing. The Normal difficulty can actually be easy. I finished the mode is just over 2 hours across the 11 planets available. It wasn’t until the 8th mission until I had to change up my tactics. And then, and only then, did I begin to progress. Making just a small change in my fleet made a world of difference.

Galactic Conquest mode is also where you earn honor, the currency that allows for new races, hulls, components, and visuals for your ships. Honor can be earned by using less ships during battle and by completing missions on higher difficulty. Before the end of this mode, I had earned enough honor to purchase everything from the research center. And had nothing left to spend it on. Gratuitous Space Battles 2 is no doubt prettier than the original game. Though, some of the visual effects are overwhelming, but thankfully can be tweaked. But even then, the art gets lost within the foreground and background objects no matter how you adjust it. And often, the game wouldn’t save my settings for how much bloom I wanted, and how much of the foreground I wanted to see.

The game also feels to enclosed, as I was never able to zoom out enough. The UI is nonsensically busy, with numbers and bars moving wildly and without an actual purpose. There’s a lot of this clutter throughout the menus and even in gameplay of Gratuitous Space Battles 2. And while it doesn’t help anything, I enjoy the chatter of dialogue that spouts out during battle. It scrolls by really fast, but it’s so neat to see your people frantic and trying to relay orders to one another as you are I’m thankful that all battles have a speed option. There’s some really great moments to see in slow motion, but for battles that are just neck and neck, the 4X speed helps move things along.

The game is rife with bugs. From the tutorial content appearing in outlines on the main menu, to game crashes at any particular moment, and mods not deleting when you choose the option, the game may be out of beta – but it feels partly unfinished. There’s even a mid-menu option for Online, which is where you’d assume you’d do some 1-on-1 challenges, but it’s actually just a messaging center and where you register your game key.

There’s also a distinct lack of skirmish mode. The rest of the game feels so light on content. There is a Challenge mode that allows you to download and rate challenges created by others to test your fleet deployment skills, but it doesn’t fill the void of pitting races and certain ships against each other.

I still managed to enjoy Gratuitous Space Battles II, just not nearly on the level as I enjoyed the original. It did not do anything outstanding that the original and its DLC didn’t do better. GSB2 looks better, maybe a bit more refined, but it is lacking on content and things to do amidst the bugs.