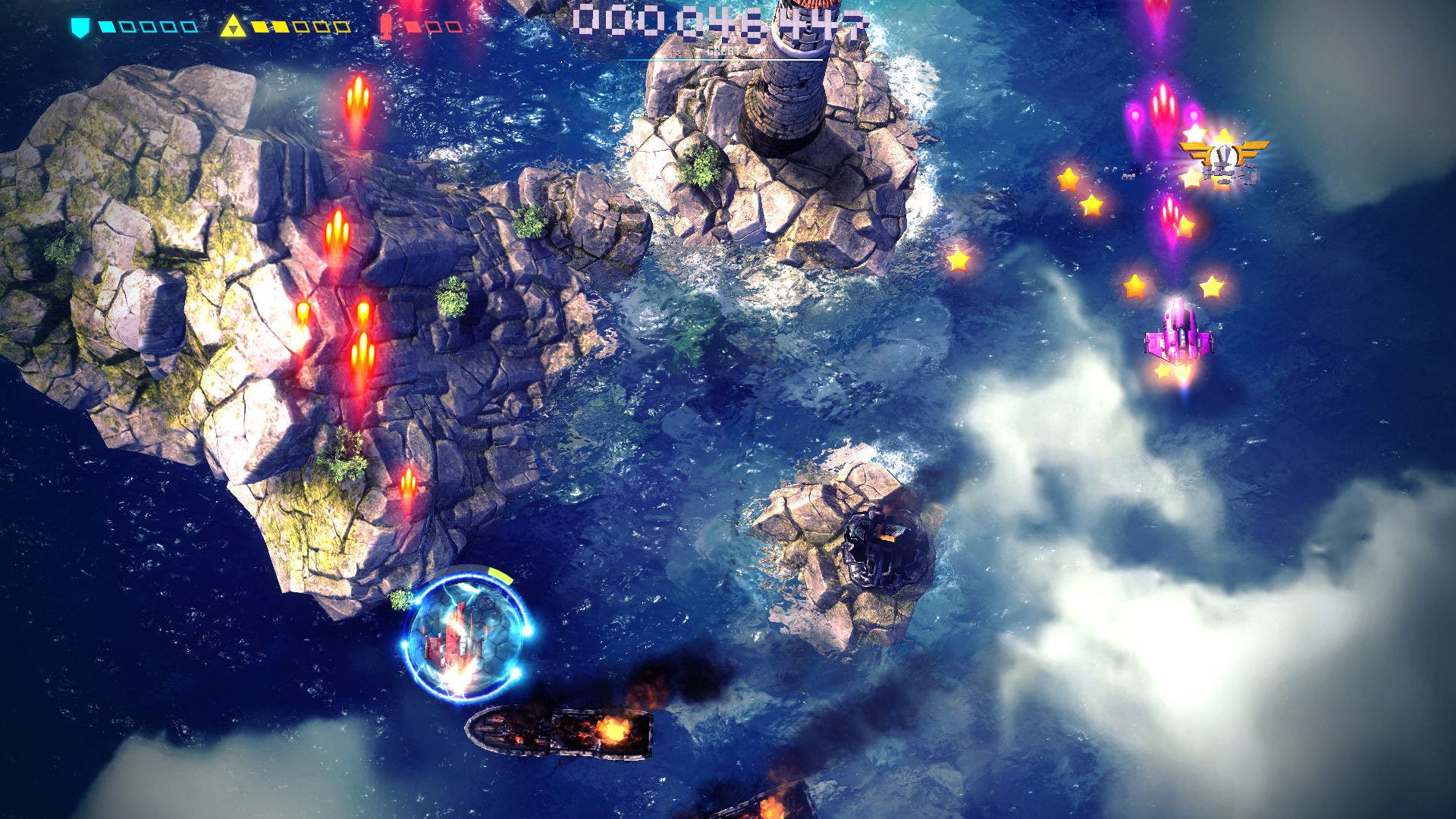 Infinite Dreams realizes not everyone has a vertical-capable monitor, and so what was once a vertical iPhone game is now a widescreen game, in 1080p at 60fps. The game was no doubt a stunning game before, now is represented by higher quality textures and incredible detail. While there’s no distinct sense of place, Sky Force Anniversary creates beautiful-looking environments that you’re too busy admiring to worry about much else.

Sky Force Anniversary is a bit like 1942 meets Raiden. You’ll traverse over sea and land while in the air, ground forces are a threat just as much as the ones in the air are. It’s like many shmups, but without being a bullet hell type of game. It’s difficult, but that’s more to do with being ill-equipped over than your inability to dodge incoming fire. 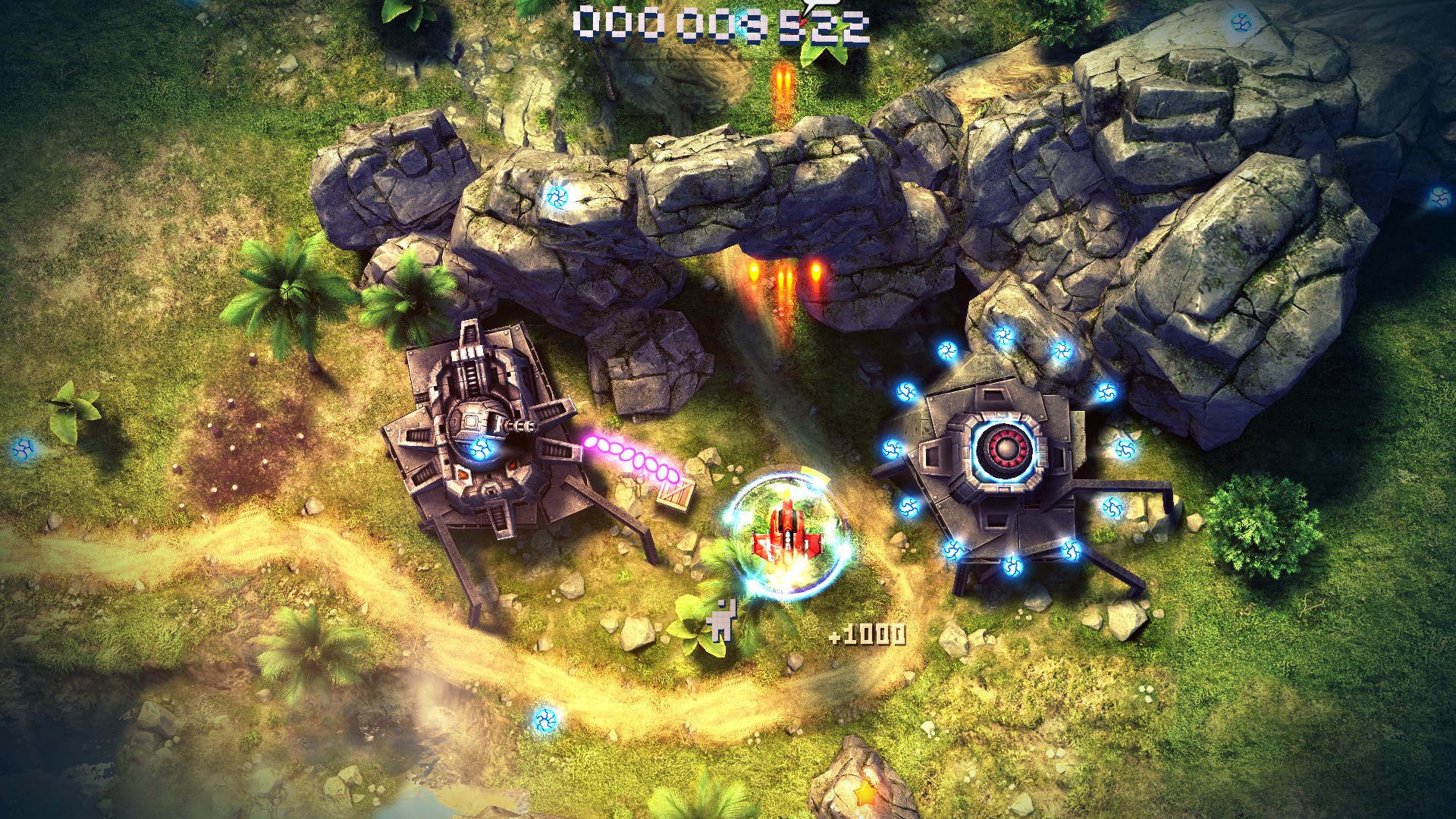 The game tracks your overall score, which can be increased by revisiting levels to obtain the four medals: surviving the level all the way to the end, rescuing all stranded people, and killing 70 to 100% of the enemy forces. Stages are often locked by certain criteria, the main being that you must complete the previous level. Other criteria might be accruing a total number of medals. The game is a bit of a grind, and that’s by design. These provide incentive to go back and do better on previous levels.

Boss fights are easily the highlight of each stage. They are grandiose and a test of your ability to maneuver in order to take down the enemy ship or air fortress. Sky Force Anniversary then takes bosses from previous stages, and then starts inserting them into later stages as a form of a mini-boss, letting you know things are about to get a lot tougher at the end. 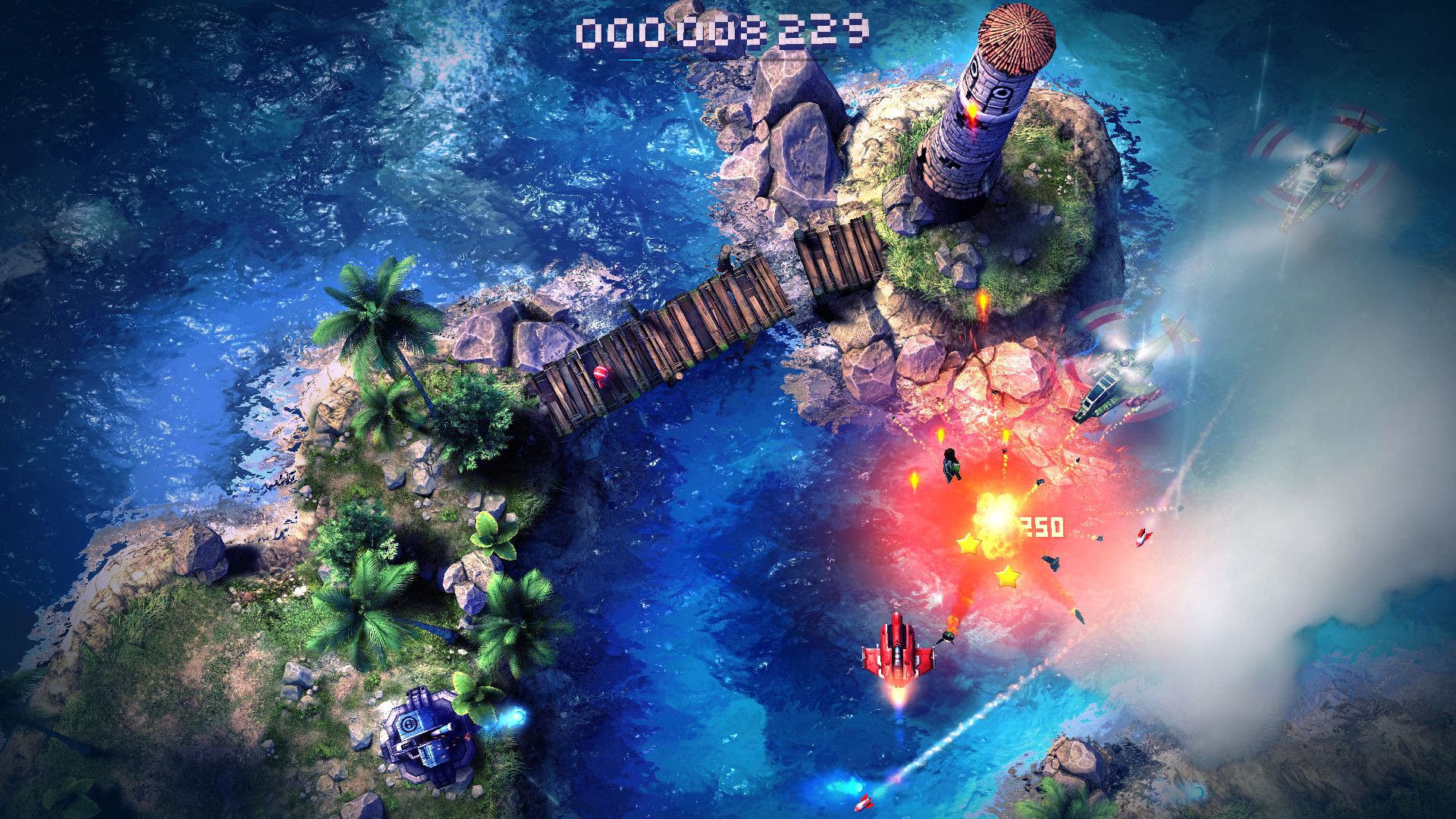 Being able to progress is heavily dependent on upgrades. You collect stars in a level, that attribute to your level and overall score, but the amount you collect is a type of currency to advance your ship. At the hangar, you can increase your health and main gun damage. When you’ve collect enough, you can add wing cannons, lasers, missiles, a magnet to collect stars easier, an energy shield to absorb damage, and a mega bomb to wipe the screen clean. None of these upgrades come cheap, and they also become exponentially more expensive as a result. This is another point of the game’s design to require you to grind, but it becomes worth it as not only you learn the game to make the most of the score, but also have a stronger, more powerful ship at the end of it.

I’m happy to report that you will not find any “In-app purchases” to be made, or any mobile timeouts. Sky Force 2014 is a free game, and it does have these elements. The PC version has been stripped of those mobile trappings, and everything must be earned and cannot be bought with real money. 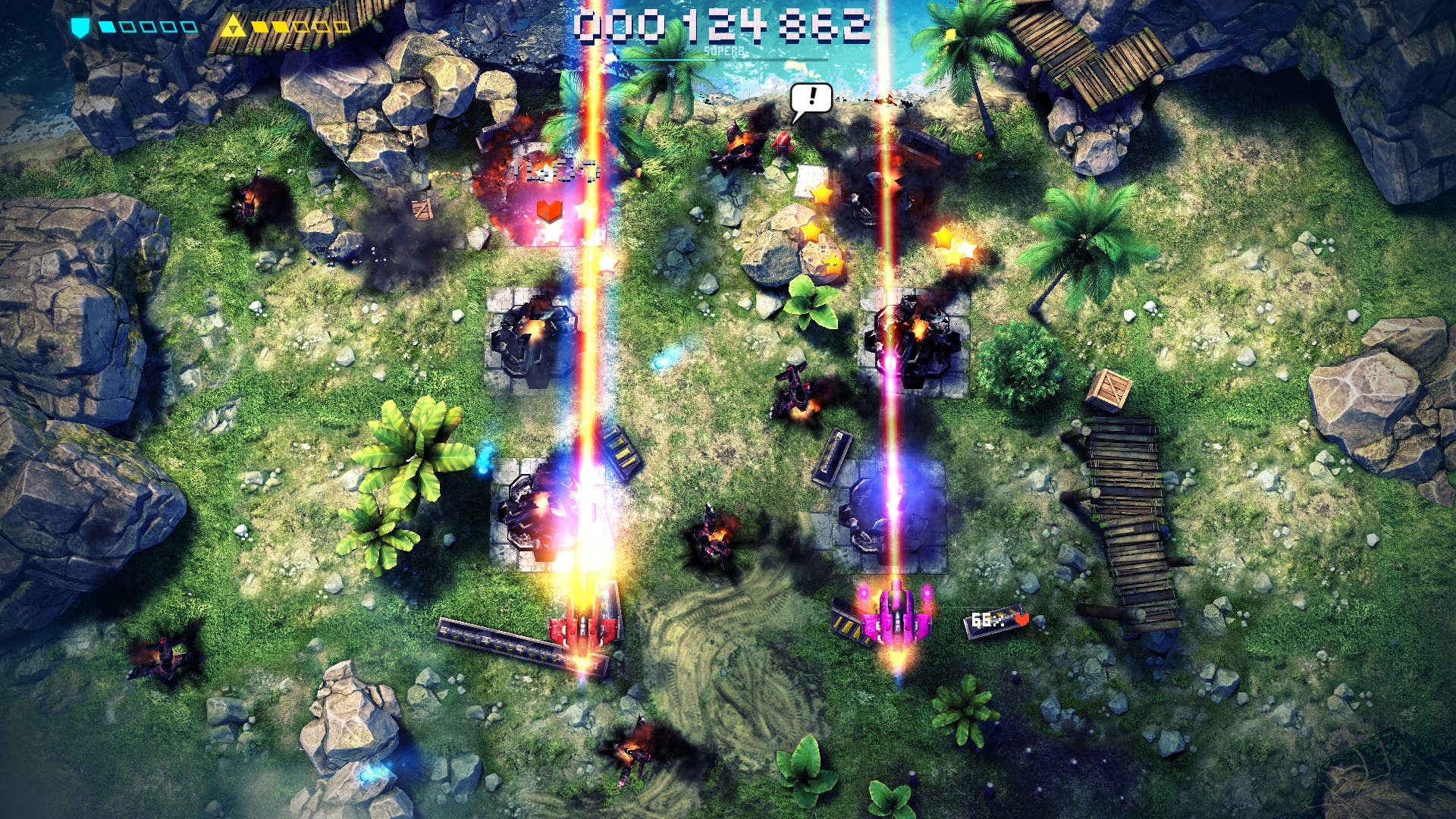 Should you die, the game marks the spot in which you died. Upon retrying a level, if you make that far, can see how far you made it. I don’t currently have any friends playing, but I know that once they do start playing, their names will start to appear across a stage where they last died. The game also supports Leaderboards, and tracks the overall score between your friends as a way to provide further incentive to best your scores.

New to Sky Force Anniversary is Weekly Tournaments, which were locked and not available at the time of review. I’m not sure what or how these will play out. Should things get too difficult, you can use a keyboard or a second controller in the series’ first local co-op, which makes the game easier with two players on-screen. 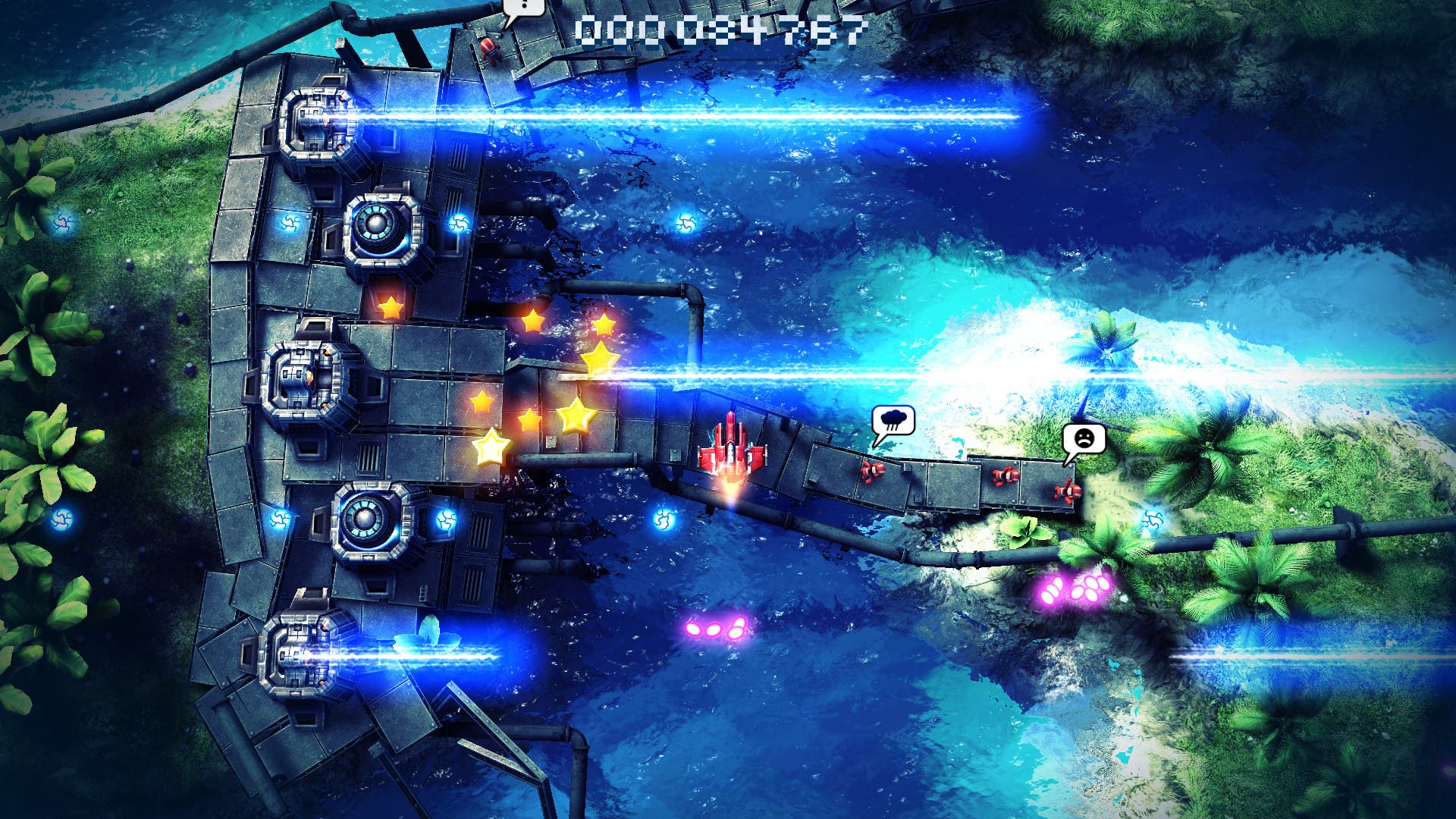 Sky Force Anniversary is wonderfully crafted. This may have once been a mobile game from the start, but you can hardly tell. It feels at home on PC with a controller in your hand. Those not willing to take the time to grind to become better are missing out on the gameplay loop that makes you a better player. Sky Force Anniversary is a must-own.