NOT A HERO Review

NOT A HERO is a game about speed and style, not unlike the developer’s own OlliOlli series. Comparisons to Devolver Digital’s other published title, Hotline Miami if it were a sidescroller wouldn’t be too far off of a comparison to make. NOT A HERO features a funny if not completely unrealistic story to follow, a cast of gun-toting potty-mouthed characters, and gameplay that moves at a frenetic pace. And it’s probably the most realest depiction of politics you’ll ever see in a videogame. I want to get the story elements out of the way first, a time-traveling bunny by the name of BunnyLord has gone back in time to begin campaigning to be Mayor to right the wrongs that occur in his future. In this quest, he drives around in a creeper van that’s been converted into being his campaign vehicle. He uses it for transporting those who work for him around to do his dirty work, to sway the vote in his favor by eliminating drugs and other nefarious acts from the city to increase his approval rating. BunnyLord holds conferences in his briefing room with his would-be hired killers with writing that’s somewhat humorous to read through, as the Mayor-to-be talks like Charlie Brown’s teacher.

BunnyLord’s first hire is Steve, a former assassin and now campaign manager. Steve’s a pretty simple character as opposed to the ones you unlock later on, but he can slide tackle enemies to stun them momentarily, and this allows Steve to deliver an execution move before they can get up. Cletus is a shotgun-wielding wrecking ball as he knocks back enemies if it doesn’t kill them, or more often will hilariously toss them out of windows. Stanley is almost overpowered, with lengthy SMG clips and quickly reloads from pulling out magazines from his afro. More characters come into the fold, making for a total of nine playable characters, each with their own unique abilities and nuances. 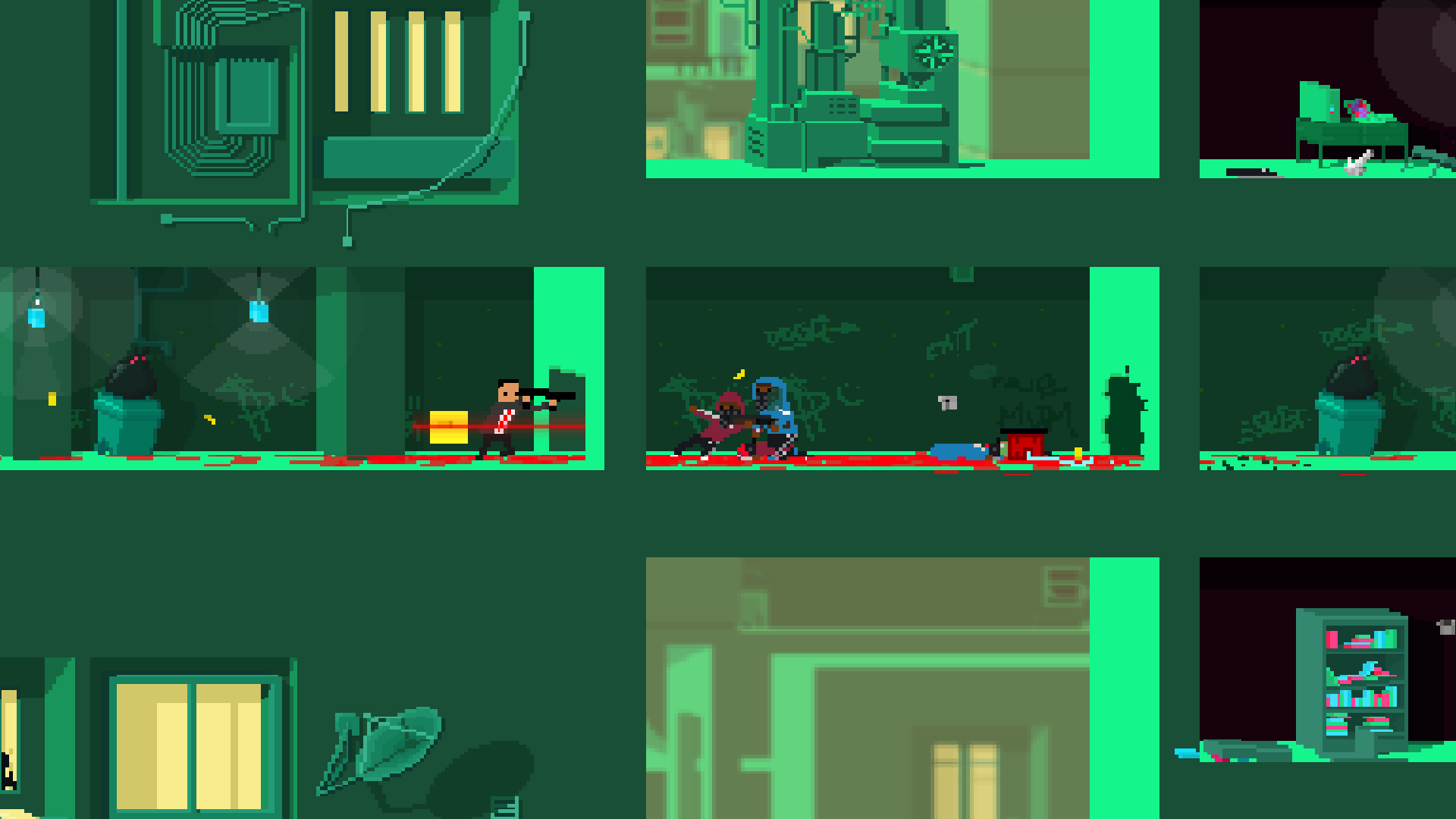 Developer Roll7 has billed NOT A HERO as the first-ever 2 1/4 cover-based indie shooter – they’re not wrong. Being able to tuck into cover gives the standard sidescrolling shooter a depth visually and in the gameplay. It’s subtle, but the character will be in shadow, letting you know they are protected from gunfire, but should an enemy get too close, they can punch you in the face and knock you down. A character like Cletus steps out of this cover to reload, making him incredibly vulnerable. All characters either slide or roll into cover, and out of excitement it is way too easy to button mash and accidentally slide into an enemy, get punched, knocked down, and mercilessly killed while lying down.

Pick-ups are littered across the levels, either from dropped enemies or carefully tucked away into places for you to find. Here you can pick up specialized ammo that gives your standard shots the precision and speed of a laser, or highly inaccurate ricochet bullets, or a high-capacity magazine for more ammo than you can traditionally hold. These buffs are usually temporary, but placed in spots that are clutch for keeping yourself from death. You’ll also find grenades with similar properties, but the unique standouts being the drillbomb which drills it’s way up a level and explodes the enemies above you, and the catbomb which is a cute ploy to draw in as many enemies as it can before blowing up spectacularly. BunnyLord’s campaign spans 21 days, split up into three sections. The three sections represent the different districts the character of your choosing will visit in the quest to make BunnyLord the mayor. Each level has a primary goal, with three secondary goals per level, and by completing them will help increase BunnyLord’s approval rating. More characters will join your cause as the approval rating rises as well.

NOT A HERO‘s second section relies on jumping through windows as a means of getting from one place to the next, surprising your enemies in the efforts of avoiding hostages from being killed. This comes at a cost, as it requires precise movement from you as the player to execute this flawlessly. This section is a stark contrast of what comes before and after it, but all the while staying true to the mechanics you’ve been taught. Character selection on any level is mostly a preference, but you’ll find that certain characters just play better on specific levels due to the demand given. 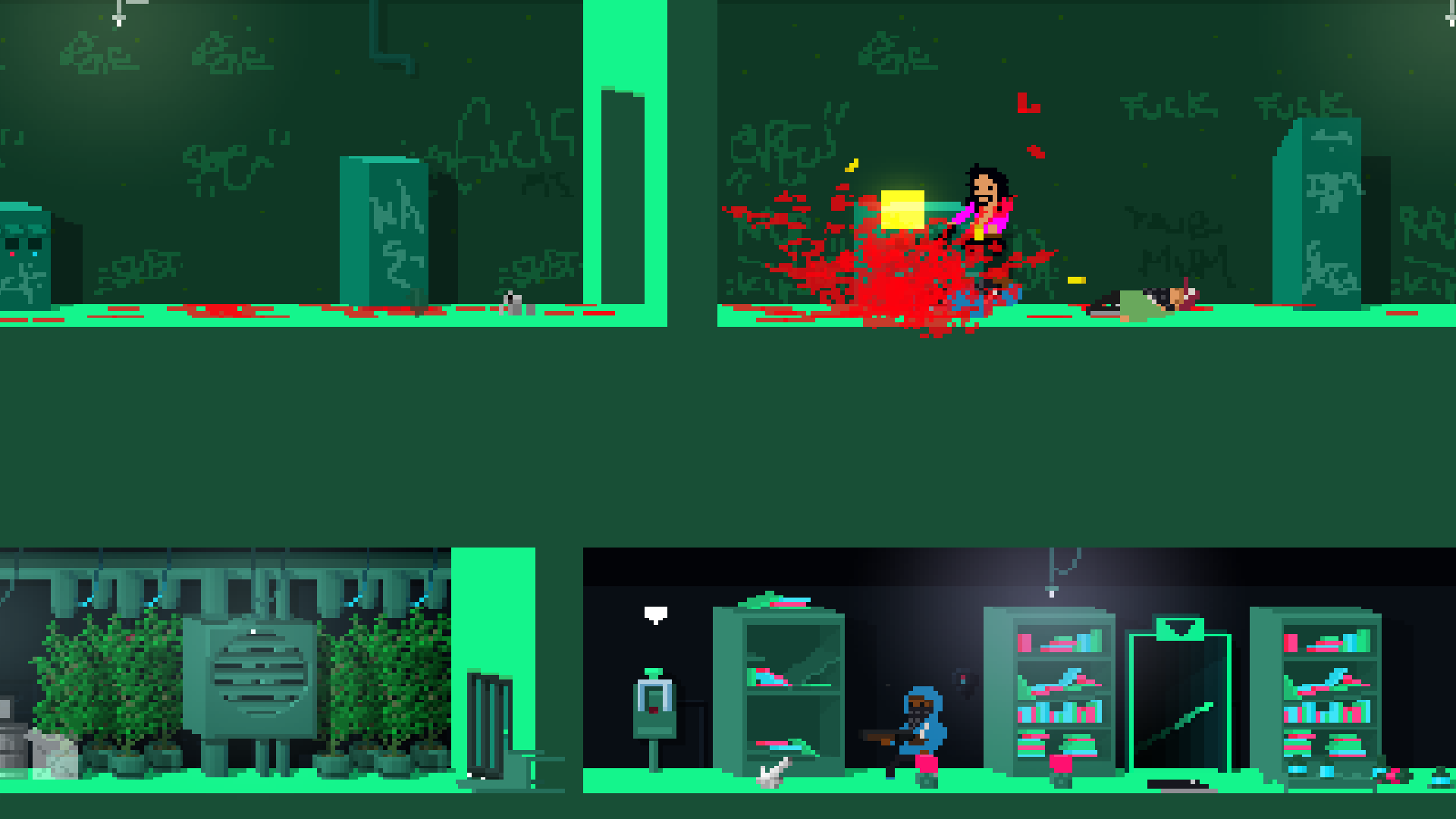 You could spend 60 seconds to complete a level, only to be killed by a surprise enemy or a mistake, as death is devastating to what is mostly a successful run. While it’s not quite Super Meat Boy levels of life restoration, a relatively quick load time of 2-3 seconds got me back to the start of a level. Several levels as the game progressed, took me up to 15 tries to finally complete, so it’s essential to be able to get right back in without too much of a delay. The chiptune soundtrack is a carefully selected group of artists that matches the energetic pace of the gameplay. And yes, NOT A HERO plays as advertised, running at a smooth 60fps, as this was the reason for the one-week delay of the game.

I primarily played the game with a DualShock 4. I might be because I became used to the gamepad, but switching over to the keyboard became a chore and not a very comfortable experience. While you certainly can play the game with the keyboard, I can’t really find a reason for it to be a benefit, it’s more of a hindrance and added challenge that isn’t necessary.

NOT A HERO delivers on the action and gameplay like you’ve only seen in movies. Roll7 has applied the goal-centric formula that made OlliOlli successful as a sports game, and applied it to a sidescrolling shooter for NOT A HERO, which I found it to be just as successful. You will end up completing the game in a handful of hours, but if you want to increase BunnyLord’s approval rating and ascension to become Global Megalord, you’ll have to replay levels with newer characters in order to do so. It may not be Democracy 3, and BunnyLord is no hero, but NOT A HERO is a challenging with a huge emphasis on action.