Clear the skies for a new hero! From independent game developer Picomy and published by SEGA, Heroki is a new action-adventure game that follows the colorful and kind propeller-headed hero on his quest to save his world and battle the enemies that get in his way. In development over five years and announced two years ago at PAX Prime, Heroki will be exclusive to iPhone, iPad and iPod touch and available soon as a premium title for $7.99 on the App Store.

Set in a whimsical universe full of flight and fantasy, Heroki challenges and delights players with fun and intuitive touch controls, and engaging gameplay. Heroki uses the wind to fly, freefall, dash, and bash across beautiful 3D rendered sky-islands, jungles, seas and deserts, on a quest to save the peaceful sky village of Levantia.

Offering more than ten hours of gameplay across four worlds and a cast of friendly characters facing off against dozens unique enemies, this deep and beautiful mobile action-adventure introduces the world to a fantastic all-new IP. 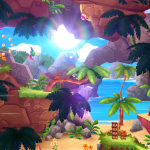 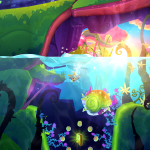