Endless Space 2 announced ahead of Gamescom Following two days of hive-mind intelligence gathering, the community of award-winning developer Amplitude Studios uncovered the treasure it long has been waiting for – the debut of the fourth game in the Endless series, Endless Space 2. The sequel to the two-time Unity-award winning Endless Space, Endless Space 2 is turn-based, 4X space-strategy that launches players into the space colonization age of different civilizations within the Endless universe. 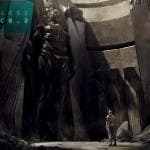