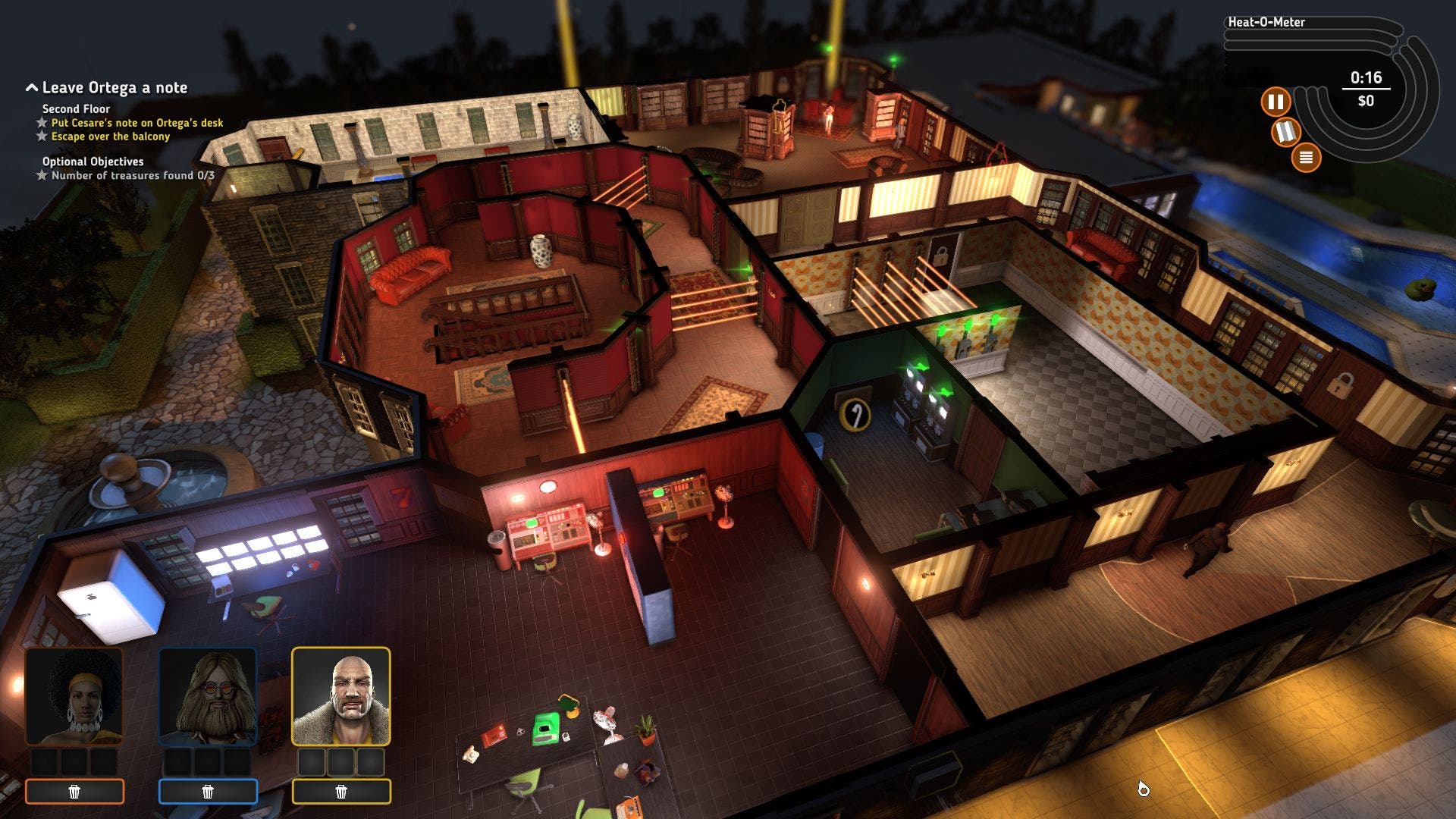 Crookz - The Big Heist is entertaining game that offers a unique spin on the strategy genre, and for heist games. The heists themselves are challenging, but not terribly interesting to actually play. It requires a lot of patience and understanding of the whole level to be successful, or you'll have to keep replaying until you get it right. There manages to be a lot of replayability to try to unlock everything and earn more money and gear. It's a neat game that just doesn't quite do anything compelling. If you're looking for a different type of heist game, then look no further than Crookz - The Big Heist, just don't expect too much out of it.

The 1970s were a crazy time: there was disco, Studio 54, The BeeGee’s, and the birth of heist movies. In Skilltree Studio’s first game, Crookz – The Big Heist, published by Kalypso, is about a ragtag group of felons looking to make a name for themselves using equipment and gadgets at their disposal in this strategy game. The result is a somewhat non-linear path of ever-increasingly difficult heists that are challenging to play, and is an interesting take on heists. The story is pure cheese, that is surely not meant to be taken seriously, but is coherent enough and easy to follow. It all begins with a double-cross like all good heist movies do. Crookz takes place in San Francisco, giving credence for the locations visited to have more impact for the heists that take place. As you progress, you’ll be be-bopping around the city lookig for and actually taking bigger and better loot.

Crookz – The Big Heist is not terribly impressive visually, but the colors are highly saturated and are era-appropriate. The voice acting among all of the characters is a bit flat and campy, as are the character designs. The menu treatments really compliment the era and overall aesthetic, if not a bit reminiscent to the Austin Powers movies with its level of humor. There’s six characters that can be unlocked in total. At first you only start out with two of them, unlocking more with each successive mission. With someone like Rufus, you have the ability to incapacitate guards for a brief period of time without having to use an item to do so. Then, there’s Cleopatra, who is a foxy lady that moves incredibly quick. Couple her with sneaky shoes (yes, that’s what they’re called), and she can move quickly and silently across an open hallway without a guard batting an eye. Each character provides a unique characteristic, and while you will have six character to use, only four can be brought on a heist. This makes it so you have to mix n match, some trial and error may be necessary to figure out what works to your playstyle.

You will either need to purchase items between heists with the money earned from looting, or you can find items within a level that can help, such as crowbars for opening locked doors (which makes noise), chloroform to subdue guards, and the aforementioned sneaking shoes. These items, when found, are unlocked for purchase for replaying a level, or going on to future levels.

The act of playing Crookz – The Big Heist is familiar to anyone who’s played a pausable strategy game recently. You can certainly play the game without ever pausing, but the game will do so automatically at times, but I can’t imagine any reason why you would want to do that. The tutorial does a good job at teaching you the basics, which you are likely to know already. There is no difficulty selection, but the missions themselves have a set difficulty shown by the number of stars displayed. And with every mission, the difficulty slowly ramps up.

At the start of each heist, you must pick your characters, gear, and then begin. With the active pause system, it allows to take as much time as you need to learn where everything is, what characters you have with you, and what you need to do. By setting waypoints, you can direct multiple characters to do simultaneous actions. Using the keyboard and mouse feels natural, but the game does support a gamepad. The gamepad does not like when you want to use mouse while a gamepad is plugged in, and will constantly fight you. I still preferred mouse and keyboard control overall.

You will often be making mistakes along the way, whether be accidental clicks and having to delete waypoints, or by getting yourself into a situation where you will undoubtedly get seen. You can get by with the first handful of missions by not going careful or slow, but the late game is nearly impossible to continue successfully. You will absolutely have to be multi-tasking your characters in order to get things done efficiently. If you’re able to memorize paths and understand a guard’s behavior, you’ll be successful.

Now, being spotted isn’t the end of heist. So long as the character seen is fast enough, you can lose the pursuing guards. Though, this raises the overall Heat-O-Meter on the level, and the guards will become more alert to the goings on. Their awareness also decreases the maximum score you get at the end of the heist. Should one of your characters be stopped by a guard, is when it is mission over. Crookz – The Big Heist is entertaining game that offers a unique spin on the strategy genre, and for heist games. The heists themselves are challenging, but not terribly interesting to actually play. It requires a lot of patience and understanding of the whole level to be successful, or you’ll have to keep replaying until you get it right. There manages to be a lot of replayability to try to unlock everything and earn more money and gear. It’s a neat game that just doesn’t quite do anything compelling. If you’re looking for a different type of heist game, then look no further than Crookz – The Big Heist, just don’t expect too much out of it.