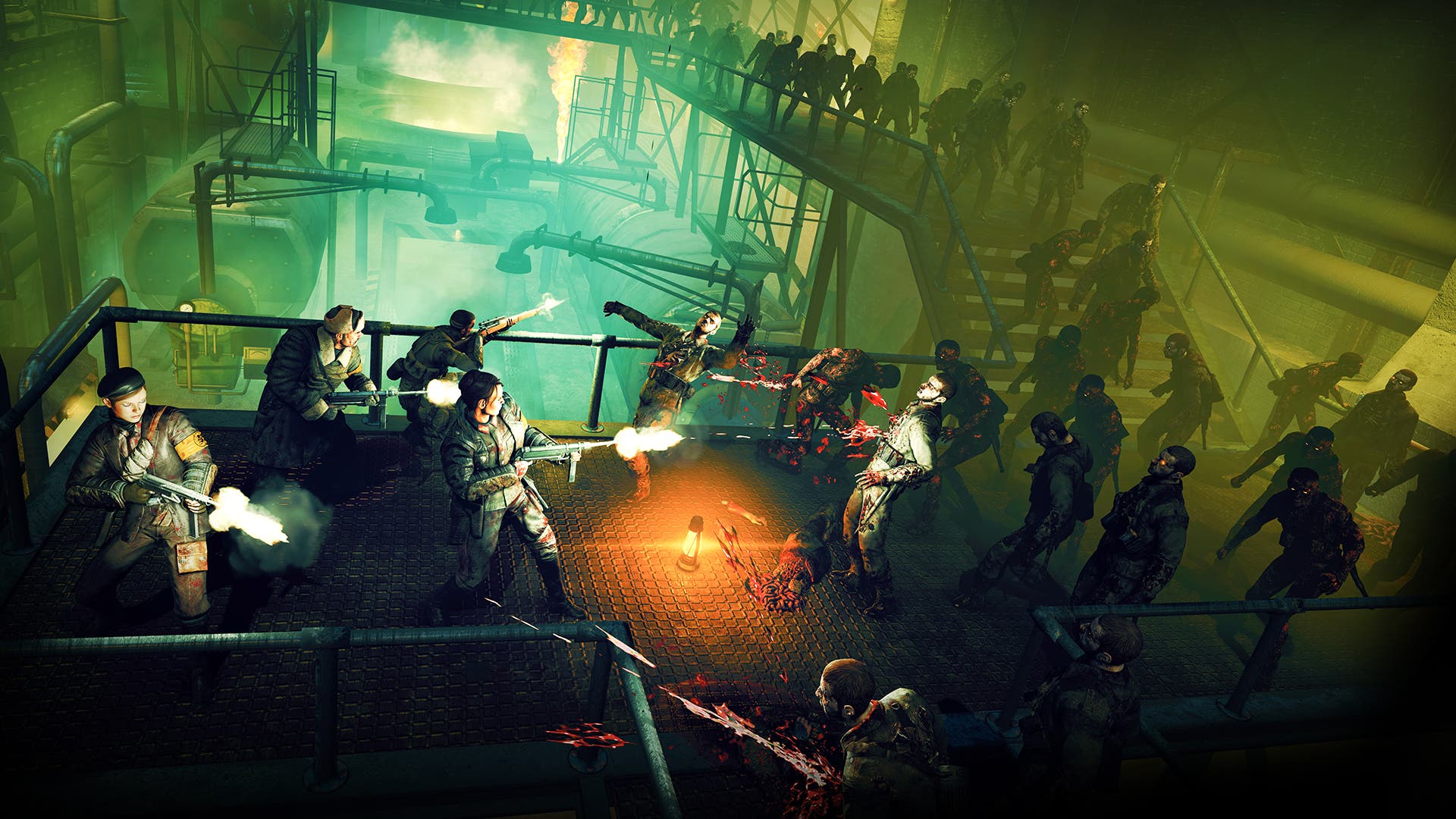 The Zombie Army Trilogy has been out for a few months, and a free update including the Left 4 Dead and Left 4 Dead 2 gang makes it a perfect fit as well as anachronistic among the craziness that the series already delivers. For the uninitiated, this was previously known as Nazi Zombie Army, which is a spin-off of the Sniper Elite series. After dropping the Nazi from the name, we have a compilation of three games, one of which is only available in this collection, and the other two were exclusive to PC. This collection makes for a well-rounded series of games that only get better as you progress, but are unfortunately a slog to get to the good stuff. As the end of World War II is wrapping up, Adolf Hitler enacts “Plan Z”, which is his fail-safe to finally win the war. In doing so, Hitler becomes a zombie himself. Thus, the Nazi Zombie Army is born. That’s pretty much the story, it never gets in its own way of just letting you kill zombies from level to level. There’s additional story that presents itself as you work towards stopping Hitler, but again, it never gets in the way of killing zombies.

Those who have played Sniper Elite before, specifically Sniper Elite V2 and Sniper Elite III, then you know the mechanics and gameplay here. If you don’t, you play from the third-person perspective except when using sniper rifle, you’ll use the scope to take them out as the main way to play. There are secondary and tertiary weapons such as assault rifles like the MP-40 or PPSh, side arms, and the ability to lay down trip mines and mines as traps. You can also equip yourself with grenades for great area of effect damage, but that damage can cascade and hurt or even kill you when chained with other explosives you’ve laid down. The flow of Zombie Army Trilogy is a bit formulaic: you engage zombies from an elevated position, move onto the next area, engage zombies from the ground, enter a safe room, and repeat until one final wave of zombies strikes. Once you reach the safe house, this is a place to rest, take a potty break, and rearm. And you will see everything Zombie Army Trilogy has to offer by the first mission’s end, but what will propel you to keep going is the where and how you do things that makes the campaign stand out.

It’s unfortunate that getting to the third “episode” is such a chore to get to, because that is where all-new content is at, and it’s easily the most interesting. If you’ve already played the first two games, there’s a bit of a retread of familiar ground to get there. It doesn’t help that the checkpoints are so far and few between. This isn’t so much of a problem in co-op as it is when playing solo. Thankfully, across the fifteen levels, they only take about 20-30 minutes to complete depending on difficulty. Every weapon in the game is a World World II weapon, even when playing as the Left 4 Dead characters. I wish this game could have taken some liberties with some time travel, but it sticks close to the Sniper Elite roots that gives the game a tension you don’t feel in games with modern weapons. This is apparent when aiming down the sights, picking off zombies, for some stragglers to come up from behind you with little warning and making you react wildly and maybe get the best of you.

In Zombie Army Trilogy, you now have the ability to kick. It’s a very awkward looking animation, but it does fend off zombies when out of ammo or too close to use your weapons effectively. When is a zombie is downed, you can loot their corpses for ammo. Looting is a manual press and hold of a button. It’s somewhat of an extensive effort when bodies are piled upon bodies, which takes too long to sift through. Bodies all disappear on timers, which seems too short given how long it takes to get the ammo in the first place. A carryover from the Sniper Elite series is the x-ray bullet cam. It’s a slow motion shot showing the trajectory of your bullet as it pierces the enemy and what damage it causes to their internals, in this case, the zombie. It’s a grotesque thing of beauty. Every part of the zombie is squishy, exploding, blood is spurting out, and leaves a pile of gibs behind. Zombie Army Trilogy makes sure to stock up on red barrels, ammo cannisters, and other explosives to help make this happen.

To coincide with the visuals is the top-notch audio work. Every gun shot, explosion, bullet piercing through a zombie’s body, foot step, and moan is crisp, clear, and unnerving. Coupled with a synthesized soundtrack that sounds like it is from the mind of John Carpenter, atmosphere is in spades here. Every level of Zombie Army Trilogy is “themed”: cathedrals, train stations, subways, libraries, trains, and even forests. They all have their green, blue, and yellow hues to them that evoke horror and look absolutely gorgeous at max settings and high resolutions on PC. If you’re playing Zombie Army Trilogy solo, the campaign levels are best played in short bursts. If you’re looking for a challenge, the “Sniper Elite” difficulty adds in wind variances and tougher enemies, but it just gets in the way of a good time. Alternatively, if you don’t want it to end, horde mode allows you to go for a top score and see how long you can go.

Zombie Army Trilogy is best played in co-op, though. This makes the game much more enjoyable. Every player character is the same, no class or specification outside whatever they choose for their loadouts. The lobby chat can let you get organized before things begin. It’s fun seeing a running leaderboard of scores for each player for the level, and it gives a competitive twist to the cooperative affair. Zombie Army Trilogy is somewhat enjoyable solo, but is vastly improved with friends or even strangers in co-op. The focus of playing a sniper may not fit in a game that demands more twitch responses, but that’s what makes the moment to moment gameplay intense and unique. Zombie Army Trilogy is like that Halloween episode of your favorite show, where it doesn’t quite fit the tone of the regular episodes, but it’s still enjoyable all the way to the end.