Players in “Forza Motorsport 6” will soon be able to race in post-nuclear style thanks to two new “Fallout 4”-themed cars coming to “Forza 6” on Xbox One. Turn 10 Studios and Bethesda Game Studios, the makers of the highly anticipated “Fallout 4,” today announced a partnership that will give fans the chance to experience “Fallout” in the Xbox One-exclusive racing game.

Starting today, all “Forza Motorsport 6” players will receive an exclusive “Fallout 4”-themed version of the 1956 Ford F100 in the game. With a retro-futuristic Vault-Tec theme, the “Fallout 4” F100 will be sent to all “Forza 6” players in celebration of the upcoming Nov. 10 launch of “Fallout 4” on Xbox One.

Also coming soon, for a limited time, all players of ”Fallout 4” on Xbox One will receive the super sleek Chryslus Rocket 69 coupe – the future of speed!

“Everyone asks us if you can drive the cars in ‘Fallout 4,’ and now we can say yes – in ‘Forza,’ our favorite racing game,” said Todd Howard, Game Director at Bethesda Game Studios. 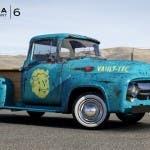