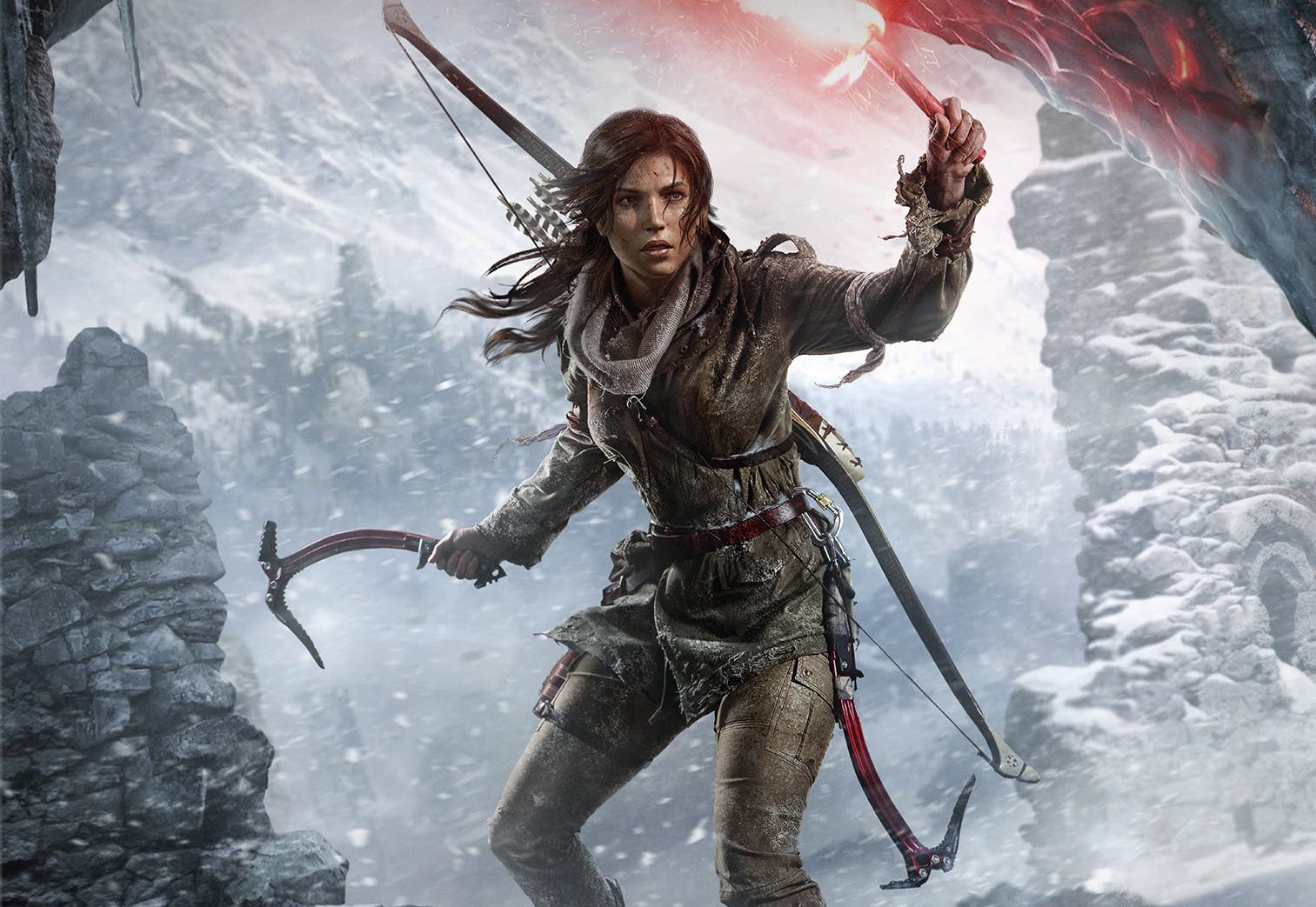 Lara has endured quite a bit since her last adventure that left her dealing with an ancient god and a group of crazed men stuck on an island. She’s changed and no longer thinks her father was crazy in his pursuits before his death. She experienced things unlike ever before and was pushed to the brink of hardships while enduring an ancient curse. She is determined to continue her father’s work and prove that artifacts of power do exist in the world. It’s a compelling enough story and one that immediately feels more like the classic Tomb Raider games of the past versus the last. While in Tomb Raider we felt as if Lara was stuck in a bad situation and coming to terms with it. Here Lara is out on a mission, not only to prove to her father, but to herself. It leads to a rival evil corporation called Trinty going after the same artifact and Lara helping others when she least expects to. The story, while interesting and more involved, still remains fairly basic but well told at least. It drives the point of certain elements a bit too much at times, but it’s a small blurb in an otherwise well told, simple narrative. Rise of the Tomb Raider doesn’t just harken back to the originals in theme and elements of its story, but also in gameplay. Players familiar with the last game will know that Lara is quite the fighter and that was to some folk’s dismay. I’ll say it now and get it out of the way. Combat is still a fairly large element to the game and while some situations can be completed without combat via stealth, players are bound to come across it quite a bit regardless. Lara still has access to a ton of options when it comes to combat. Pistols, rifles, shotguns, and the crossbow, which are all from the prior entry show up here, though now players can explore and find even more variations in guns parts to collect and use. Each of these weapons can also be upgraded via the new crafting system. Animals provide pelts and hide, berries and wood provide other nature elements, and of course junk also plays a roll. Lara can craft more ammunition bags, weapon upgrades, and even ammo on the fly depending on what’s in her stash and what skills she has learned via the level up system.

Everything players do in Tomb Raider lead to getting experience. Skills work very much the same and as Lara gains levels she can assign skill points to the various abilities. Each skill tree out of the three offer various perks that can increase Lara fighting, exploration, and crafting abilities. Tomb Raider included collectibles to find scattered throughout the world and is once again as addictive and fun to explore and find as before if not better in Rise. Lara’s world is a much bigger area, inviting for exploration and discovery offering players more reasons to check out the beaten path. A hidden cave could essentially house crafting material, but careful as Lara might have just stumbled upon a den of rabid wolves. Hidden optional tombs also are discovered and while the game does notify players once again that a tomb is nearby, the ways to get to the tomb or access it are not nearly as obvious the majority of the time. It’s a shame they didn’t allow the ability to turn this message off but it’s great that some still require a bit more than just walking into a cave or taking place in a seemingly square room, though that does still occur. Survival instincts and the glowing interaction icons can be removed so that’s something of a tradeoff. Lara also can gain language knowledge now based off the murals and treasure she finds at times. This enables her to read specific totems that point out hidden caches for coins, which are used as a separate currency for a single seller in the game. He offers some unique outfits, weapons, and be sure to pick up the rope line zip device early on, it’s extremely helpful.

Speaking of the optional tombs, this time they are much bigger visually and with more variation. There are some genuine moments of awe as players come to a tomb Lara discovers and the sense of wonder hits hard. While most tombs have only one or two puzzles a piece, they are all fairly unique, interesting, and while some are fairly easy to play, especially for veterans of the series, others had me stuck a good while before finally figuring it out and getting that “gotcha” moment. We still have nothing quite as elaborate or frustratingly vague as in the older Tomb Raider games, but instead we still have much more thinking involved then in the prior game. Whereas before it seemed like little rooms with challenges, here we see amazing visuals and places that actually feel like tombs. This is all just concerning the side tombs, as the main game features about 2 or 3 of them itself and again offers inventive puzzles and ways to make the player think when they’re not busy shooting the bad guys. Reaching the end of the tomb doesn’t just lead way to crafts or coin either but also permeant additional ability boosts making them worth seeking out and finishing.

Combat feels as fresh as it did before if not a little bit too much the same. Having the core weapons return give way to those feelings of familiarity but it’s the added elements of crafted ammo that changes it up. Fire, poison, and grenade arrows, fire shotgun shells, armor piecing pistol bullets. Being able to craft these for use along with environmental items like cans turned into grenades, bottles turn into Molotov’s, and even the ability to turn dead bodies into traps is refreshing and new. The combat might seem familiar but the options at play are exciting and welcomed. While some fans want to see a return to Lara not shooting as much, this entry surely won’t prove that, but the amount of exploration and downtime between those moments are more prevalent and feel more balance outed. The game is still filled with exciting, eye opening set piece sequences that get the heart pumping, but it’s the elements of just exploring, and crafting and solving puzzles that really feel take the game down to a different somber pace at moments and keeps it from feeling as if it’s in overdrive the whole game. Platforming is of course a huge element to the prior entries and here it returns also with more options and abilities to give a unique spin to what otherwise could be considered too familiar element. Lara jumps and can climb on appropriate ledges and crevices, use both her axes to climb rocky or ice terrain, and she can swing from rope locations and even use a grapple hook. The platforming elements can still feel a bit too automatic but these variations led me to feeling more satisfied. Rise of the Tomb Raider features a vastly different setting then the last game. Here was have snowy mountains, dark caves, icy outcrops, green forest, swamps, and much more. The amount of unique looking areas, even in just some tombs or side areas look fantastic. Some basic caves can lead to repeated looking areas but enough locations have a unique look and feel and of course invites players to wanting to explore more. The entire game I never felt as if I was retreading the same world or setting unless having to backtrack for collection or story purposes, but even then something new or different was happening.

While the game feels like a major improvement in almost every way, there are still some issues I had during my 20 hours of playtime. While the game looks great, it can stutter and faint traces of top picture screen tearing can and does occur. I really, really had to look for the tearing, but the framerate moments are noticeable and while it feels fairly locked at times, the heaviest areas I noticed it was during the more open world hub locations. Granted even small areas have quite a lot to explore but these seemed to provide the worst moments. Combat and platforming was never hindered due to the slowdown or stuttering but it’s fairly noticeable even if I’m more forgiving of it. Story wise it provided a great return to elements of prior games with an evil corporation and a race to getting the artifact but what started off as strong antagonists, seemed to dry up a bit for me towards the end. Those two issues aside, I couldn’t be happier with Rise of the Tomb Raider. They dropped the online multiplayer aspect and instead added challenge moments or repayable sections of the campaign for score attacks and leader boards with the world and players friends. It’s nice to have as a bonus and it has a unique and interesting way of earning ability cards for gameplay tweaks in this mode, but none of it feels particularly necessary. Rise of the Tomb Raider features some amazing variety in visuals, along with a superb moody and intense action soundtrack when necessary. It’s filled to the brim with exciting moments, superb combat, fun traversal, and that core action adventure feeling that most games never quite reach. The most important take away is this though. Crystal Dynamics has taken the elements of this newly created Croft and transposed elements of the old games into it. The sense of awe and discover returns, the accomplished feeling of completing puzzles is back, exploration has taken on a better approach, and while it still has more action then any of the retro games did at this point, it’s all merged together so well that this is quite possible one of if not my favorite Tomb Raider experience. It has some minor flaws to me, but otherwise I just had a blast with this long, meaty, and fulfilling adventure. Rise of the Tomb Raider indeed.