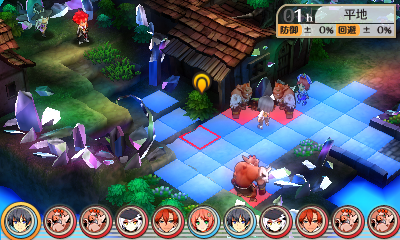 Strategy, turned based RPGs have not been the role playing preference for me growing up. I enjoyed games in the genre that allowed exploration and fighting. SRPGS usually required more flow with building characters and fighting strategies and it was something I felt overwhelmed with. Fast forward to years later and I couldn’t be happier with them. Now seeing as this is the final game release by Imageepoch, I had to give it a whirl and it’s thankfully a great, albeit familiar RPG to end on a high note. Players assume the role of Alto, a young man living with his friend and family Lisette. Life is simple and routine almost, until one day a song is heard. Now singing isn’t something out of the ordinary to use, but in the world of Stella Glow, these have all but disappeared for years. Soon after discovering, Hilda, a witch of destruction and chaos. Alto and Lisette get thrown into a story about searching and battling the witch by recruiting other witches and stopping Hilda in her tracks.  It’s a story that while interesting definitely seems to cater more to some classic RPGS tropes. Evil bad guy, twists, searching for a team or element to save the world. Yet it’s the setting and characters that really make or break a RPG storyline and from Alto to the 9th Regiment soldiers, I love the cast and voice actors, which really bring to life the story. This is especially nice as the story exposition in between missions and battles is pretty heavy at times, but with the cast and various backgrounds and settings, it all remains interesting and visually appealing. While characters all have a cute style and more simplified look while on the battlefield, during the actually fights, there are close ups of the action which give way to even more detailed characters and downright cute designs. They have this positively colorful and glowing cartoon style and it just resonated with me. Battles all take place on a typical strategy role playing grid, with movements limited to specific characters and their skill set. Whereas some RPGs allow character customization in what each character can do, in Stella Glow it seems a bit more pre-determined. While combat and strategy does come into play, I never felt the game pushed me to any extreme measures to ensure a win. That’s not to say the game is completely devoid of challenge, but if players are familiar with the genre and overall feeling games in the genre have, will feel right at home.

In between battles, Alto can talk to characters and gain favor with specific ones. This is even tied into the true ending, though I won’t spoil those exact elements.  When not doing the side story and character elements, the store and orb shops are where to find ways to enhance the characters. The armor and weapons are familiar to anyone that’s ever played an RPG ever, but the orbs that can be placed into the weapons give a feeling very similar to something like FF7 materia system, giving specific attributes and boosts depending on what each character has assigned to their weapons. I really appreciated the characters and dialog the most in Stella Glow. The story about Witches is appealing to me but it still holds true to most RPG style storytelling, but that’s partly why players love the genre anyways. It’s the characters and the world that always sell me on a RPG more so then combat and Stella succeeds a ton in this department for me. Its strategy RPG mechanics are solid if not a bit familiar and basic even compared to other games but it’s a world I was fully invested in and with characters I really liked. Stella Glow isn’t a RPG that will be known for changing the world, but it’s one solid, enjoyable, and lengthy one with multiple endings, new game +, and a nice send off to the Imageepoch.