This holiday season, winter comes to Rocket League! Independent video game developer and publisher, Psyonix, announced today that its the popular sports-action sensation, enjoyed by more than 8 million players worldwide, is serving up its own brand of Christmas cheer with significant new items and additions.

In addition to the “Snow Day” Mutator, December 14 also brings seven new holiday-themed Garage items. Just like those found in the seasonal Halloween update, these “Winter Games” post-match drops are limited-time goodies that include an “Xmas” Rocket Trail, “Christmas Tree” Topper, “Candy Cane” Antenna, and several more. Though the chances of getting “Winter Games” items are lower than that of a standard drop, players have a chance to find one following the completion of any match, win or lose, and will permanently keep the item once found. Fail to collect all holiday items before Monday, January 4, however, and you’ll have to wait until next year to find them again.

Both the Snow Day update and the Winter Games items are absolutely FREE on PlayStation®4 and Steam PC. 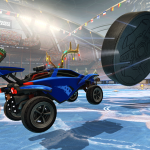 For players interested in a darker, post-apocalyptic Rocket League, the game’s newest DLC add-on, “Chaos Run” will be available on both PlayStation™Network and Steam PC for US $3.99 starting December 1.