Get ready to wield an arsenal of weapons as you battle to protect Earth against time-traveling warriors, demons, and dinosaurs. Turok makes its triumphant return to PC in time for the 2015 holiday season.

Originally developed for Nintendo 64 and PC in 1997, Turok has been re-mastered by Night Dive Studios for today’s modern gaming audience. Some of the updated features include:

Stephen Kick, CEO and Founder of Night Dive Studios, explains, “When Turok: Dinosaur Hunter was first released it was nothing short of revolutionary. To that point, no game had ever offered the combination of graphics and an open world environment that Turok featured. We are very excited to have had the opportunity to bring this great franchise back to life and to be able to share this great title with today’s gaming audience.” 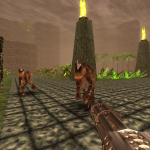 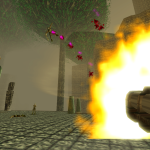 Turok is available from Steam, GOG.com, and the Humble Store SRP of $19.99 and launches with a discount of 20% off for a limited time. It’s time to hunt some dinosaurs!