“When Fiona and I formed Three Fields Entertainment a year ago, we knew we wanted to focus on what we do best: making fast, fun and spectacular arcade style games,” said Alex Ward, Founder and Creative Director of Three Fields Entertainment. “Dangerous Golf is just that. It’s as serious a golf game as Burnoutwas a serious simulation to driving games. We wanted to mix the attitude of Burnout with the destruction of Black whilst setting the golf ball on fire — a nod toNBA Jam. This type of gameplay is part of our DNA, and something we think our fans will truly enjoy.”

In Dangerous Golf, players aren’t striving for Par or aiming for Birdie — they’re playing for dollar damage as their high score. As they progress throughout the game, players will not only be awarded points for trick shots and ricochet techniques, but they’ll also get rewarded for destroying stuff by turning their golf ball into a bomb and setting off their SmashBreaker. Destructive powers increases as the ball heats up, ensuring that the most elaborate shots are not only the most rewarded, but the most impressive to watch.

The action takes place in a series of elaborate indoor and outdoor locations including a hotel kitchen, a glittering palace ballroom, a rural gas station and a stately medieval castle. Featuring turn-based play in both on and offline multiplayer, Dangerous Golf awards points based on destruction, encouraging players to get creative as they wreak havoc in an effort to increase their score.

Dangerous Golf may be a fun, silly golf game, but it’s one that was created with a serious technical edge. The team worked closely with both Epic’s Unreal Engine 4 team and Nvidia to not only push the boundaries of their PhysX, Apex Destruction and Flex technologies, but also to deliver a truly physics based game experience.

“By harnessing the power of world class technology provided by Epic and nVidia, Three Fields Entertainment aims to be a cutting-edge development studio that pushes the boundaries of fast action, amazing destruction and multiplayer gaming,” said Fiona Sperry, CEO at Three Fields Entertainment. “Dangerous Golf is just the beginning of a series of games that will focus on speed, danger, excitement and destruction.” 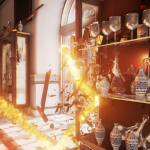 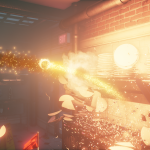 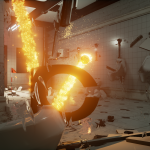