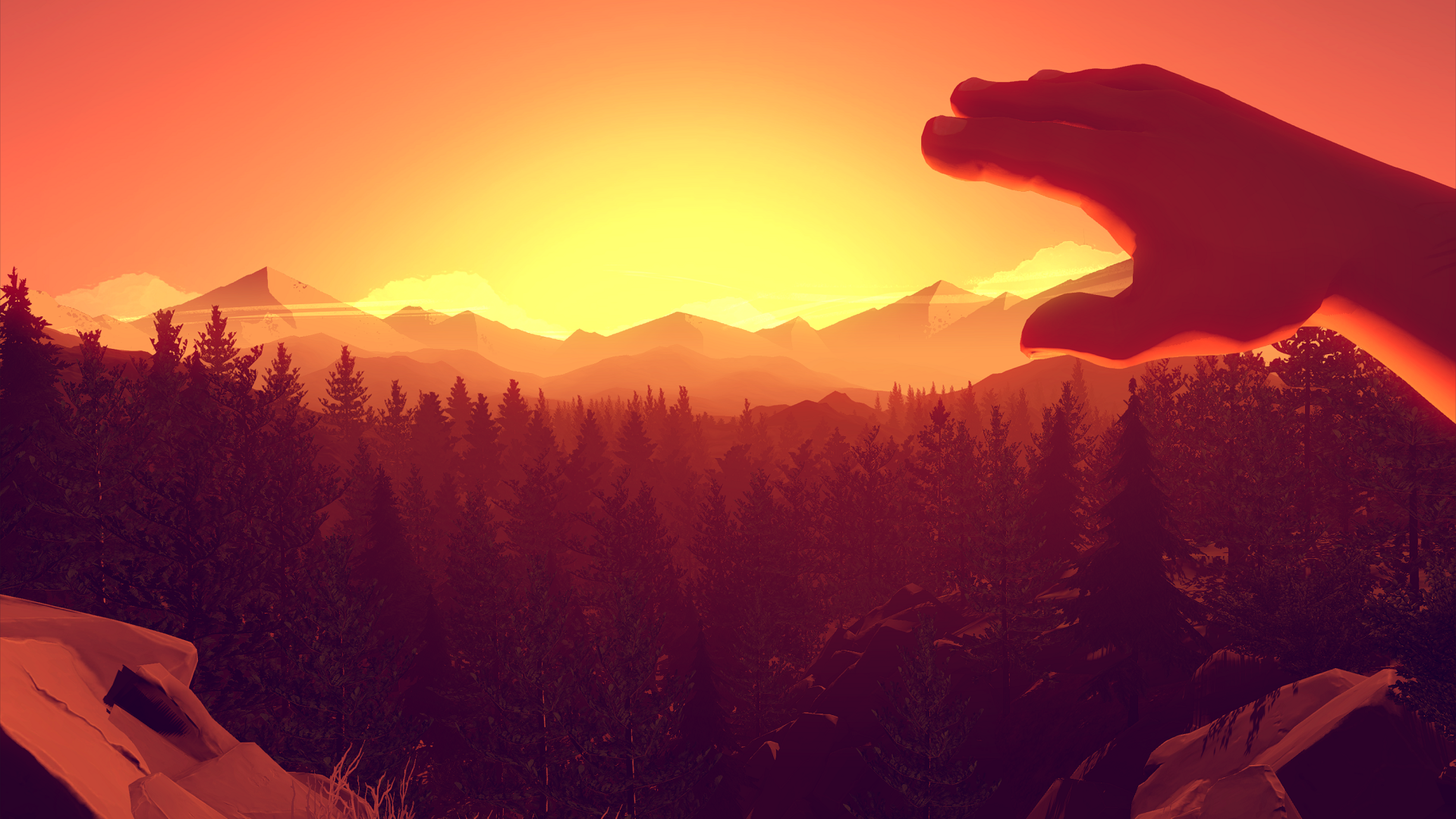 Firewatch begins rather unexpectedly and delivers a sobering reality for the main character you play as, named Henry. In this moment, you’re given a tutorial without realizing it. This tutorial also allows you to choose certain elements of Henry’s backstory that will shape future conversations. Firewatch is multi-faceted, offering first-person movement and interactivity, adventures, mystery, and a full range of emotions for you and the characters to experience. Everything about Firewatch made it difficult to put away for any length of time, like a good book. Firewatch does really well to hold on to your interest from beginning to end, and has no intention of letting you go. After Henry takes on his role as a firewatch, he meets Delilah on his radio for he can only see her tower from his position, and nothing else. A firewatch is never meant to leave their tower, as it is their sole purpose to report fires from their position when they happen. However, Delilah is Henry’s supervisor, so if she tells him to leave his tower to go do something, Henry is the type of guy that’ll go do it. He’s also looking for anything to distract him. When it comes time to investigate something for reasons you’ll uncover, it’ll be done all by your lonesome (with the exception of your vocal contact with Delilah, of course). The feeling is isolation permeates throughout your time in the fictionalized trails of the ‘Thorofare’ region of Yellowstone National Park. So when things start to go awry, both you and Henry come to find out that Firewatch isn’t all that it seems to be.

Your interactions with Delilah are mostly voluntary, and is entirely up to you if you engage with her at all, or how you do so. The conversations flow naturally, selling the realism. Dialogue is dynamic and reactive to your input, as you can tell her things about what you’re seeing and doing, or just respond to her input. Each response will have a timer on it, requiring you pick one of the dialogue options, or ignore her. She’ll occasionally ask questions, and how you answer determines whether you choose to get personal or keep it professional. And the way you continue to answer, affects how relations with her go. While I was playing as Henry, I felt like I was building a relationship with Delilah, positively and negatively at times. To feel so involved is like nothing else in this game, it truly felt like it was just me and her, and no one else.

Exploration is rewarding, whereby the map and compass are vital for your day-to-day navigation. There are caches to be found that will hold noteworthy items to add to your map, as well as supplies, and information on what has transpired before you arrived. As the game progresses, Henry’s map becomes more and more scribbled on as you progress. Eventually Henry will acquire a flashlight for night-time hikes, as well as things like an axe for clearing out brush. Obtaining higher-end climbing gear will make it safe for Henry to go spelunking or climb to new heights. Why Henry didn’t have some of these simple items is unclear, but you’ll be glad to have them when you do. Firewatch encounters some issues when building up what can only be thought of as a conspiracy or a mystery that has you and Delilah equal parts confused and paranoid. There are often many red herrings that do as they’re designed to, but by reaching the game’s conclusion, there are still many questions left unanswered or unresolved as to whether or not there was more to what was going on at certain points. And they are likely never going to be answered. The game goes as far as to give a definitive ending, but might have been better off if it hadn’t. To answer some questions while leaving others unanswered just doesn’t feel as tidy as it ended up trying to be. I was satisfied with what it was, but it didn’t live up to where it was seemingly going. The voice acting is nothing short excellent. With Rich Sommer (“Mad Men”) as Henry, and Cissy Jones (The Walking Dead: The Game – Season 1) as Delilah, this is the absolute best acting in a videogame I’ve heard in some time. The delivery, the tone, the investment into developing these characters are so believable, you begin to care about them, individually and collectively. The writing for these characters is especially strong as well, making for the delivery to be so believable.

The artistry of Firewatch seen in videos and screenshots hardly do it justice. The vivid and saturated baked-in visuals are a delight to behold, so much so that I raked in exactly 300 screenshots during my gameplay. Seeing the handcrafted look of these visuals are like something from a painting, but yet in this 3D space, everything is textured so well that you get immersed in your surroundings as you walk through thick forests, canyons, and lakeside flora. Firewatch is a visual splendor, and the way the game will show the day-to-day adventures of Henry, allow you to see the beauty that this place can create at any time of the day. Firewatch is a must-play game for 2016, despite it stumbling across the finish line. The characters, the environments, and the story is carefully constructed and put together in ways I never expected. The conclusion to the game’s narrative is not what the characters in the game, or I had been believing it to be. Firewatch had me engaged and immersed in a fictionalized Wyoming during a summer of 1989 because it feels like you’re a part of it, participating in conversation, going out to investigate things, and having only one person to talk to during it all. Firewatch is an engrossing adventure game that I intend to replay for years to come.