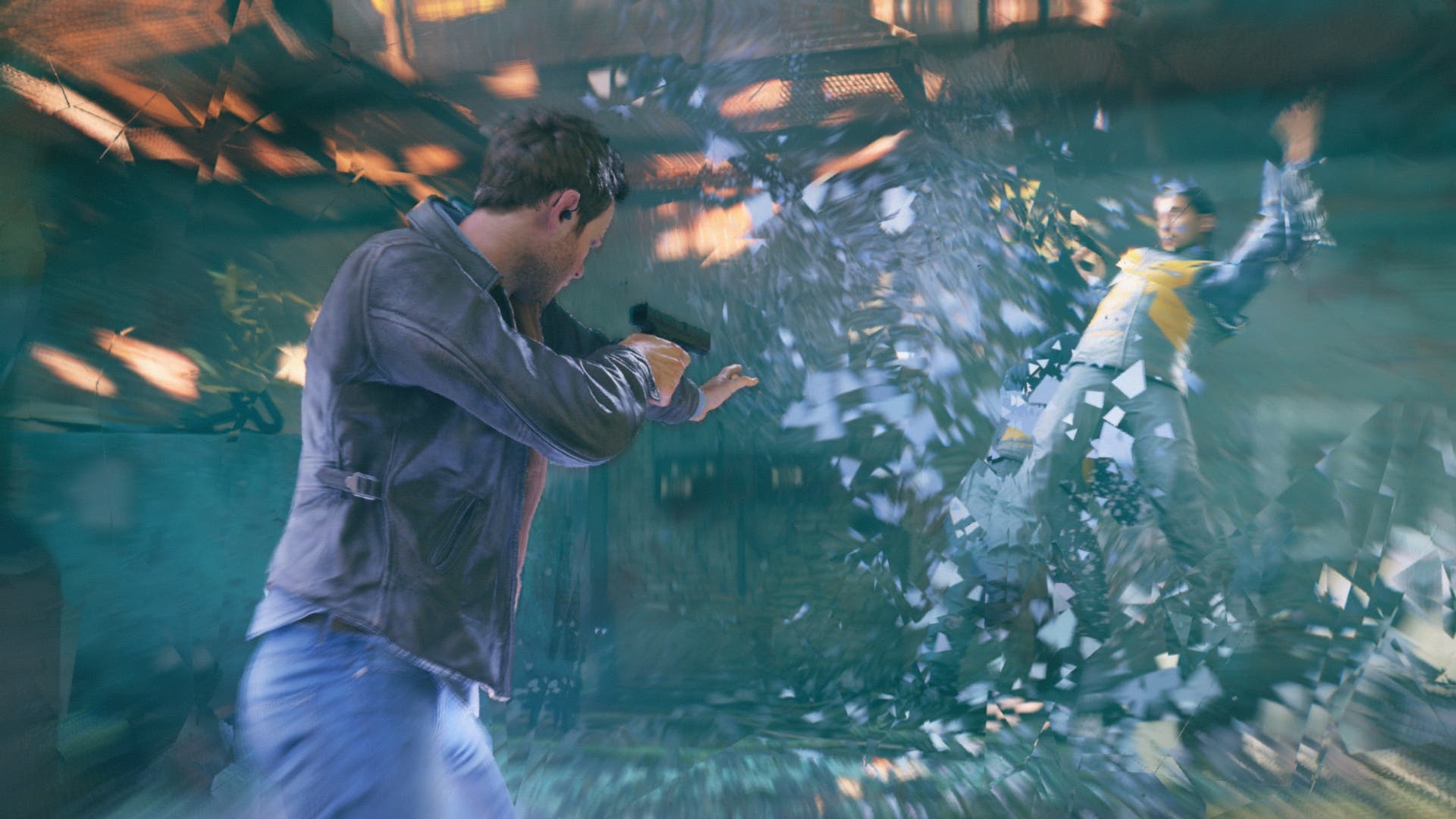 Time is always running, constantly moving forward. Events transpire around the world and the idea of going back to change horrible events has always been an aspect of time travel that seems to resonate with people. Going back to change catastrophic events, win the lottery, or stop yourself from making the wrong choices. Yet are there consequences to those changes as well? “Time is an egg… and that egg is fucked” has never been a more appropriate thought, especially when it comes to the latest video game from Remedy, the creators of Max Payne and Alan Wake. Quantum Break is here to show players how time can be fun again, even when very bad things are happening. Players control Jack Joyce (played by Shawn Ashmore), a seemingly caring brother that is called upon by one of his best friends Paul Serene (played by Aidan Gillen). Jack doesn’t know exactly what is going on but soon learns that Paul has been dabbling in a project concerning time travel. Jack scoffs at the idea, until he see’s undeniable proof that what Paul has created is more than just talk. Unfortunately something occurs and an explosion rips through the lab, leaving Jack to escape with his brother and slowly learn that he has new found abilities involving time. Time is now fractured and slowly ripping apart.

Normally I’d like to focus on gameplay mechanics first and foremost, but with this title, I’m feeling a bit of a change up is necessary, because Remedy is pushing Quantum Break as an interactive experience as well as a game. Key characters are played by their perspective real life actors, voiced by them, and play them in the live action moment as well. While Paul and Jack are the main focus, there are plenty of supporting cast and they all do a really awesome job portraying their character types and arch. Yes, as folks have probably heard, there are four 22 minute episodes of live action between acts that deliver information and a semi back story to the game involving the corporation Monarch that Jack is up against. These are absolutely not necessary to understand the story or follow what is happening in the game, but they do add a lot of backstory elements and little interesting tidbits to the overall story. I found myself really enjoying these with the various actors and action occurring. They didn’t come off forced or terrible and I felt it’s one of the best live action portrays in gaming, take that for what it’s worth. I sat for 22 minutes each time, soaking it all up and this just goes to add to the atmosphere and the setting that Quantum Break has going for it. This is a craft that Remedy has been working on since Max Payne and refined more so in Alan Wake. Here Quantum Break takes it even further with live action, actors digitized, and everything comes together feeling more natural then I ever expected. There are still moments of oddness or uncanny valley moments at times, but overall, I’m just extremely pleased with the overall effect. Now here comes the shocker: Quantum Break is a third-person shooter and somewhat typical for the genre is portrays. It appears to be covered based as the mechanics is in there for Jack to hide behind desks, tables, and walls. Yet to play it like this would be a disservice to the time powers that are at play here.  Where most games become a pea shooter like carnival experience taking safety shots from cover, in QB it’s more about taking those moments of shelter for when there is bullets come from every direction and only if the shield power is drained completely  They are small moments of rest during what is otherwise chaotic action. The time powers that come into play and can be upgraded via finding collectibles hidden in the levels, offer a level of fun and freeform freedom in gun combat I haven’t seen in a game in a long time. Enemies rush at Jack, sometimes staying their ground, other times moving in. Again, this isn’t a shooting game where taking cover is the focus. Players will want to run in, freeze enemies, dash forward in time, shoot explosives, put up a time shield, and then when demolishing a room full of baddies, Jack walks away as if it was hardly a big issue. The element of the powers, the way they can be executed, and the ensuing action-chaos is so highly therapeutic but also satisfying. Time powers of course can only be used so much before they need to be recharged, but finding the perfect balance of what powers to use, when to use them, and have the next at the ready is essential. I haven’t even touched base on the insane visual effects that accompany said time powers and the way it effects the world around.

Quantum Break is 720p on Xbox One, let’s get that right out of the way. For those worried about resolution or need to have something greater than that, the cats out of the bag and we can now move forward. That said, this is probably the best looking 720p resolution game I’ve ever seen and that’s partly due to the fact that Remedy is using very specific elements for their engine and rendering to ensure there is still a great visual experience. As time plays a huge factor into everything this game is about, so does the visuals.  From waves of time flowing outwards from Jack, with ripples effecting every element of the environment.  Time stutters that showcase environments that move back and forth, as if being rewound and played again and again, particle effects from time slowing down and explosions rocking the scene.  The amount of visual flair and detail occurring, along with the framerate remaining rocksteady during the craziest of moments in action, leave me feeling in awe and gives Quantum Break not only an amazingly good game to look at, but to also play. Add on the great delivery of dialog, the fantastic soundtrack, and audio cues every time powers and action occur. Much like time, it ebbs and flows together with such pin point precision, it’s scary to think of how much work went into this game to get it all working together.

I know, I’m praising the game left and right, and honestly, I’ve had such a great time with Quantum Break, it’s hard to discuss the issues that I do have with it and while for me they are minor, they do take away from the elements I was wishing a bit more for.  From a gameplay perspective, the visuals and gameplay set pieces comes together and really wow the player and the amount of talent to create these moments had to be insane. Though sadly I found myself wanting more, though maybe that’s a testament to how well done they are?  The power effects and particularly the stutters are just a site to behold and I want more. Another somewhat disappointment was the changes in story when choosing a different path at each junction. There are differences, but they are not as impactful as I thought they could be on the story. They felt different but still the ultimate story beats play the same and it only goes so far to tailor player’s experiences differently and lead to something bigger at play. QB is a fast paced game with action and it shows in the controls, which are great when the action is occurring. When it wants to take a more explorative approach and the game doesn’t force players to walk slower, Jack Joyce appear to flail around, running fast then needed, and it just comes off somewhat disjointed. Same with the cut scenes and cinematics. Sometimes they look absolutely amazing, other times the models in game come off looking not as detailed. The last element of disappointment came from the final boss, as it has a one hit kill attack and while once discovered and is easy to avoid, before that it’s a frustrating element that might have folks redoing the end battle from the start a few times and end the game on a sour note. Remedy continues to innovate in mixing high octane, refined action elements with intense and well done story elements that build their worlds up like no other. From a shooting game standpoint, Remedy is sticking to what core story driven games usually provide.  Linear, point A. to B. with scripted elements, battles, and sometimes explorative elements. Fundamentally the gameplay from that perspective can feel almost archaic or old school.  Yet with the time powers, the visuals that encompass the gameplay, the live action, and the world building, they push the game above others and the elements combined with the shooting mechanics. Combat that also provides excitement, fun, and replayabilty, even after the story has been played out to boredom with players, the combat and visual spectacle will continue to bring folks back to it again and again. Time may be fucked, but in Quantum Breaks case, that might not be such a bad thing.