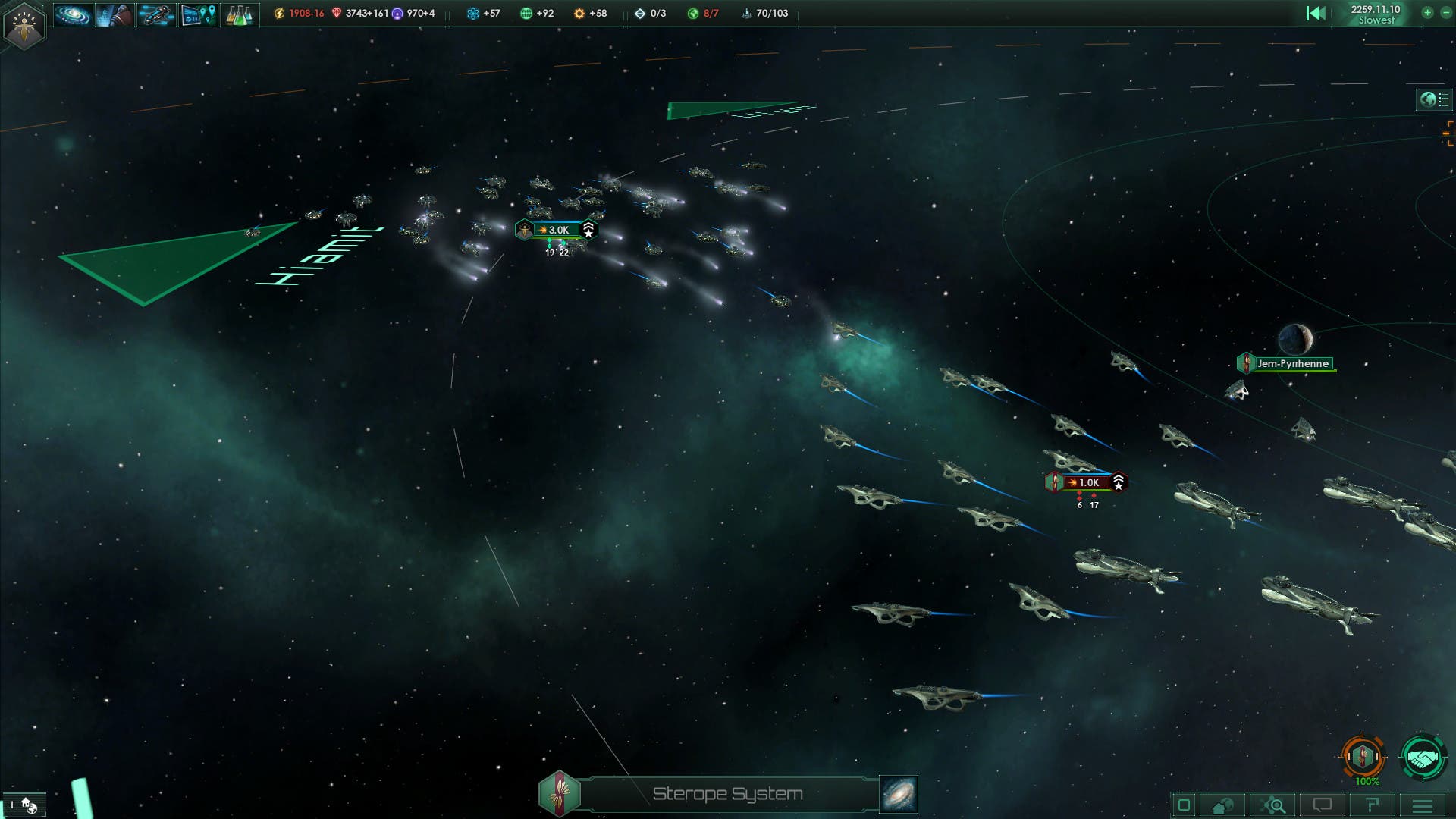 Paradox is known for their historical grand strategy games like Europa Universalis and Crusader Kings, and the question has long been asked of them when they are going to make a space game. Now that they have, they had to abandon historical accuracy and go for future science fiction, which creates nearly endless possibilities. Paradox is out to “make space games great again” with Stellaris, and I can confidently say that they have done so in spectacular fashion, making this the biggest Paradox title to date, but also the developer’s most accessible game as well. What makes Stellaris special, is the game’s near-infinite ways to play and explore a vast universe that’s begging to be discovered. Stellaris is its own breed of grand strategy and 4X. For those who don’t know, it stands for eXplore, eXpand, eXploit, and eXterminate. You can draw comparisons to what Stellaris is, like with Sins of a Solar Empire and maybe Endless Space, but Paradox puts its own stamp on this game. It again runs on an updated and modified version of the Clausewitz engine that has powered Crusader Kings II and Europa Universalis IV before it, but to great detail and breathtaking interplanetary systems made of known systems. Stellaris benefits greatly from Paradox’s long-line of grand strategy games, and has a tutorial that’s very helpful in understanding everything that you can do in the game. The tutorial will guide you through every facet of the game, explaining them not only with text, but voice overs as well. It gives you mini-quests to ensure you grasp what’s being presented. These of course can all be turned off once you get comfortable with the controls, systems, menus, tabs, and subtabs.

The game moves in real-time, if you want. Though you have a bit of time control to play, pause, speed up, or slow down time. You must multitask, focusing on one action over another just wastes time, and friendly or enemy alien races are working towards some sort of expansion or victory over you. It’s essential to analyze, and then queue-up actions before you lose out to a timed quest or something time-sensitive. Stellaris allows you to shape the galaxy the way you see fit. And you have to act and react on the events that get placed before you. And it’s how you react that will make you successful or not, if not, will take some time to recover. I started by building science ships, and then sending them to corners of known space to scout and gather information. After scouting, your galaxy view will fill in with territorial colors reminiscent of Europa Universalis. Species may or may not be hostile after meeting you, and it’s your choice whether to be diplomatic or aggressive. You can setup embassies in your new friend’s homeworld, or immediately declare war – just be prepared once you’re ready to do such a thing.

War is inevitable. Whether you are planning on it or not, you must prepare and not make this an afterthought. It’s imperative that you amass grand naval groups. Doing so increase your military power, and it is a numbers game when in direct conflict. However, there is a cap on units, and your expenditures can get out of control if you go beyond it. Stellaris lets you have full control at this, from being able to build new ships that survey nearby star systems, but be able to rename the fleets and people within them. More than that, you can build your own ships from resources gathered and items build from research. When exploring, there will be timed events to gather information on remnants of wars gone by. Other times anomalies will appear, and these are a great opportunity to gain information on past civilizations. Each alien race encountered, are procedurally generated. As such, you’ll learn there are multiple faster-than-light methods, and many of them can be employed by you.

Stellaris drives itself on its resources: Energy Credits (currency), Minerals (resource for building), and Influence (political power). No matter what you do, expansions are always a good thing. If you can swing it with enough power, whether it be through diplomacy or war, you can make vassals out of your interplanetary friends, which essentially have them around to do your bidding, while they maintain their independence. Depending on the faction chosen, which, in my main game was the United Nations of Earth, which meant a democracy. So every 5 years there would be a vote during an election. You can offer support to candidates that align with your beliefs. Things get weird when your leaders die out, and your omnipotence carries on.

When you’ve colonized a planet, the planet will have tiles blocked off that need to be cleared, provided you’ve researched the ability to clear a tundra, lava, or desert tile. Placing people onto tiles is what helps you gain resources like minerals or energy. There’s a lot of layers and complexity that I wasn’t able to extract the details of, but I did learn that putting people into biomes they were not used to, would make them mad. So from there I had to be careful on placement going forward. I was also able to set edicts, or otherwise short-term policies that would keep everyone happy while reliably getting resources out of them. The sense of discovery is the same for every faction. For instance, if you start with a faction from Earth, all the planets are named as you’d expect. However, if you start elsewhere and visit our solar system, the planets are only named after the Sun (Sol). This is where Stellaris’ emergent storytelling happens, it’s all in the moment. They are full of intrigue.

Stellaris is one of those games that’s full of stories to tell, from small to big. Early on, I had a financial issue where I went into a deficit, but at the same time I was building solar panels for my space station, and upon completion, I had pulled myself out because of the money I was saving using solar energy. It’s such a little thing that ended up keeping me out of trouble. Other times, it was discovering a new alien race that my group had the same common enemy, and together we rose to prominence, as then I took on my new found extraterrestrial friends as my vassals, and controlled the whole galaxy. Mod Support: The game will be able to support mods from changes to full and total conversions. While everything included in the base game is well worth playing, I can’t help but get excited at the chance of seeing “Star Trek” and “Star Wars” total conversions that allow you to explore this galaxies. But those are the bigger aspirations, I can see smaller modifications that tweak the pace of the game, increasing the number of embassies you can establish, and even importing ships that others have built. The possibilities are open for players to create and share endless amounts of mods that will shape this game going forward, and keep people coming back for years to come. After years of romanticizing what it would be like to have a space-faring Paradox game, the time has finally come. Stellaris gets its best features from Paradox’s fantastic land-based grand strategy games that came before it. Set against the backdrop of our own known universe and fictional races and interactions of plausible technology. I feel like I’ve only scratched the surface of what’s in the game, Stellaris has a wide scope for what’s possible and doable for this grand strategy game set in space. Stellaris did good in teaching me the basics and ensuring I always understood what was put in front of me. Stellaris is one of the finest games I’ve ever had the pleasure of playing.