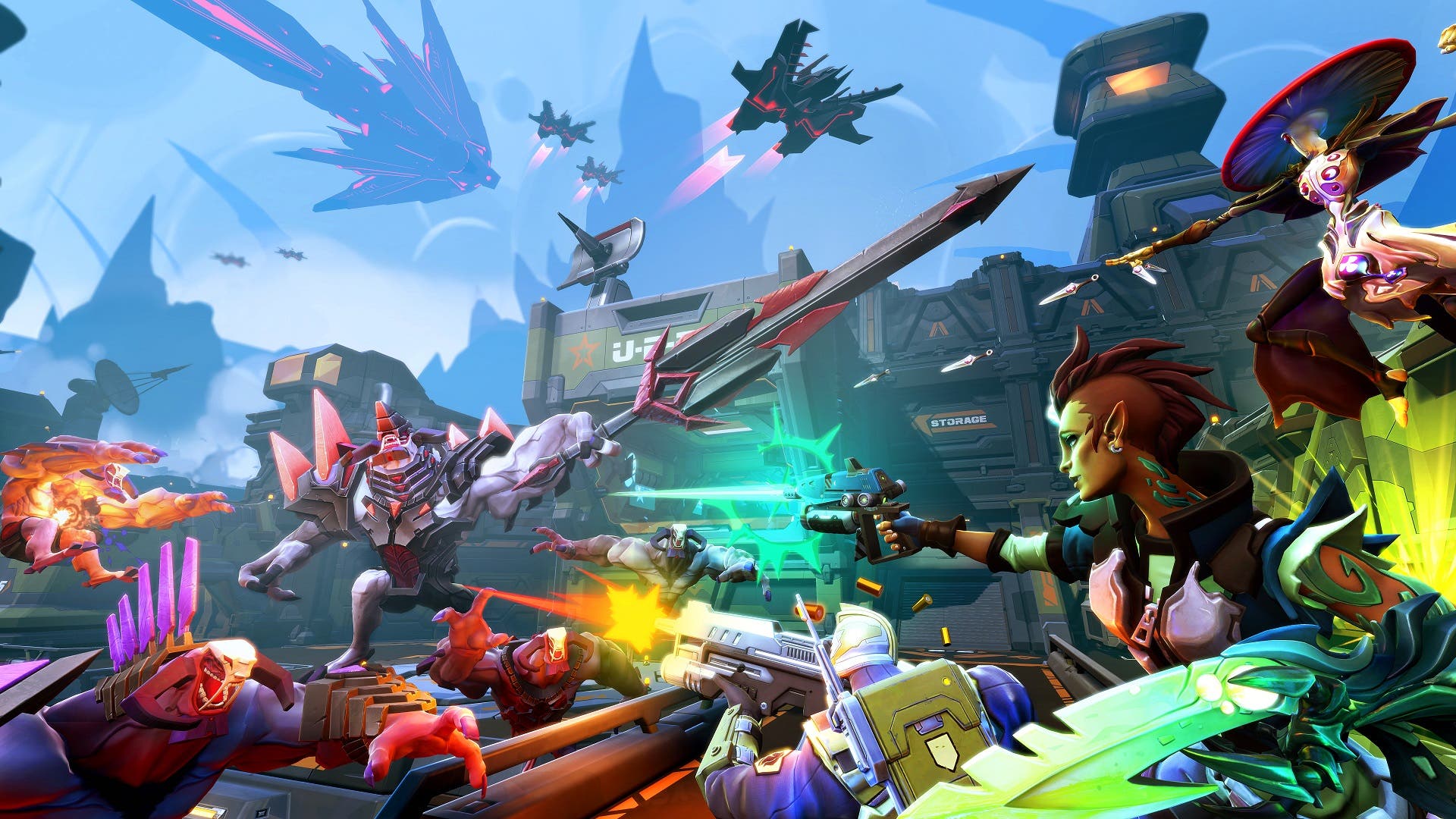 Battleborn is amalgamation of games that has elements of MOBAs, role-playing games, and first-person shooters that does a lot, but all of it well enough to enjoy and be able to sink enormous amounts of time into. Gearbox Software knows how to make a character-driven game, and it is no different with Battleborn. In fact, the game is an extravaganza of a showcase, as the game is overrun with characters with unique personalities and individual traits. This, coupled with a fun campaign missions and unique multiplayer makes this one of the more positive multiplayer experiences I’ve had.

Battleborn starts with a lengthy opening sequence that’s super entertaining visually, but not very informative. The details of the story get setup and says that an inevitable event has occurred to which all of the stars in the universe have gone dark, and there’s one star remaining that everyone is fighting for. How do you save the last star? By fighting endlessly for it, I guess. The story isn’t explained super well, but it more or less just gives a reason for the game to exist for these really intense battle of heroes to occur.

The serious-sounding story and dire situation of Battleborn doesn’t quite work when everyone involved is quipping or making jokes. Sure, it introduces some levity into the situation, but it doesn’t maintain the balance well enough. It however gets a pass because the gameplay and voicework provide solid entertainment and laughs throughout. You just realize that the game is here to be fun, and nothing else.

Battleborn has some interesting depth in not only its gameplay, but characters as well. There’s a distinct lack of persistence, with the exception being the Command Rank you obtain through playing all modes and characters. As you play a player vs environment or player vs player match, there are MOBA trappings of restarting a character over from scratch and leveling them up each time. At first, to those who play RPGs regularly might be dismayed, but in fact, it is quite enjoyable to build a character on-the-fly for the scenario that you find yourself in, and what works best. In the best case I can make for it, it ensures you are always able to group with someone no matter their rank, only difference is available heroes at yours, or their disposal.

For each level obtained, your helix bar allows you to choose one of two options to build up your character. At Command Ranks 3, 5, 7, 9, and 12, you have mutations which add a third option to the standard ten levels. Heroes can overlap on missions, though they can be disabled in favor of having unique characters per match. There are 25 characters to play is, but not all of them are unlocked. They can be unlocked by reaching certain milestones of the Command Rank, and are more advanced characters to play. There are five factions that exist in the game, but don’t really factor in to much, other than the way they look or the powers they have. They just come from different corners of the universe that have survived the extinction event. Interestingly enough, the story missions are regarded as raids. Raids are something from MMOs there are lengthy, taking about 30-45 minutes to complete. While the campaign stuff isn’t really long, there are eight missions in total, and when you think about raids, that’s actually quite a lot. Now, the act of playing them is often hilarious, but sometimes lacks variety in favor of constantly having to defend an immovable, or movable target until the game says you’re done. Story missions when playing in public are matchmade at random, no choice in what you play. So it is very possible you will see things out of order, but yet the missions are built in such a way that if you do play them out of order, that’s okay. I ended up choosing to play the story modes in private just so I could get them in order, even though it didn’t matter. The introduction for missions were entertaining, as you got opening credits highlighting each player and making you feel important.

Then there’s Battleborn‘s PVP, consisting of three modes: Capture, Incursion, and Meltdown. Incursion is Battleborn‘s most MOBA-like, where your team is constantly being assaulted by waves of minions as you simultaneously do the same and try the other’s base. Capture has two teams like Call of Duty‘s Domination mode where capturing and holding objectives earns points to win the match. Lastly, there’s Meltdown, which is similar to Incursion but you instead guide the minions to the center of a map as they Lemmings their way into an incinerator to earn points for the team. By game’s end, either by time or points, declares a winner. I found Captured to be my personal favorite as feeling more like traditional multiplayer. There isn’t a mode I disliked, but the traditional MOBA mode of Incusion wears on you, making Meltdown was a bit more enjoyable. Pair these modes with friends, and they are endlessly fun and enjoyable to play. It’s always something new. Battleborn uses shards as currency for just about everything. In any given mission or match, you’ll use it to build drones, build turrets, and use gear that you’ve picked up (once your Command Rank is Level 3 or higher). Shards can be picked up during a match, either by their lonesome or big shards in various locations of the map. Shards cannot be kept to be used in the next match, so use them while you’ve got them, or they’re gone for good.

I’m not saying I know what’s best, but certain characters don’t feel as balanced as others, and we’re likely to see re-balances in future updates. Or at least, I hope, considering the issues with melee characters just not dealing the type of damage that you think they would, since they have to be so up close and personal. And no amount of leveling really makes them viable. Melee characters have to get in close, then back off in order to survive, or have a grouping healer. The game doesn’t do much in the way of ensuring you have a “proper team” setup, it just lets you do whatever you want, but without any guidance, can lead to some frustrating and devastating losses. Battleborn has a lot of similarities with Borderlands, almost feeling like it was a Borderlands game before becoming what it is now. There’s bright colors, and even the shield and health bars and system is like Borderlands. This is actually a good thing, as by playing it you feel familiar with the look and feel of the game, despite each character playing and looking different than the last. There’s a lot going on in the menus of Battleborn, it is almost overwhelming when you see everything on-screen. Hopefully this can get cleaned up.

Gear can be bought from the in-game store using currency unlocked through playing story and online matches. There are packs that can be purchased, and thankfully don’t accept real money currency, but are things you should be interested in. This is really the only way to provide bonuses and enhancements to your characters. Gear items are like loot items in Borderlands, in that they will give a boost to how shields work, ability cooldowns, and more. Higher tier items have a trade-off to where you lose out on something in order to gain the benefits, and low-tier items do not have any sort of penalty.

Battleborn is a game with lots of different things going on. It was hard to accept that the character progression during missions or multiplayer would not be retained, as you get attached to the characters you’re playing. Learning the characters has been a joy for those I’ve had access to, the progression feels right despite feeling like I should have access to more of them than I do. There is no real way for these characters to shine in the story or elsewhere, they are all grunts in a larger battle that has no importance for them. It’s up to you to make them the stars in a place where only one star remains. Battleborn is a great first-person shooter that combines elements of other genres into an experience that’s hard to tear yourself away from.