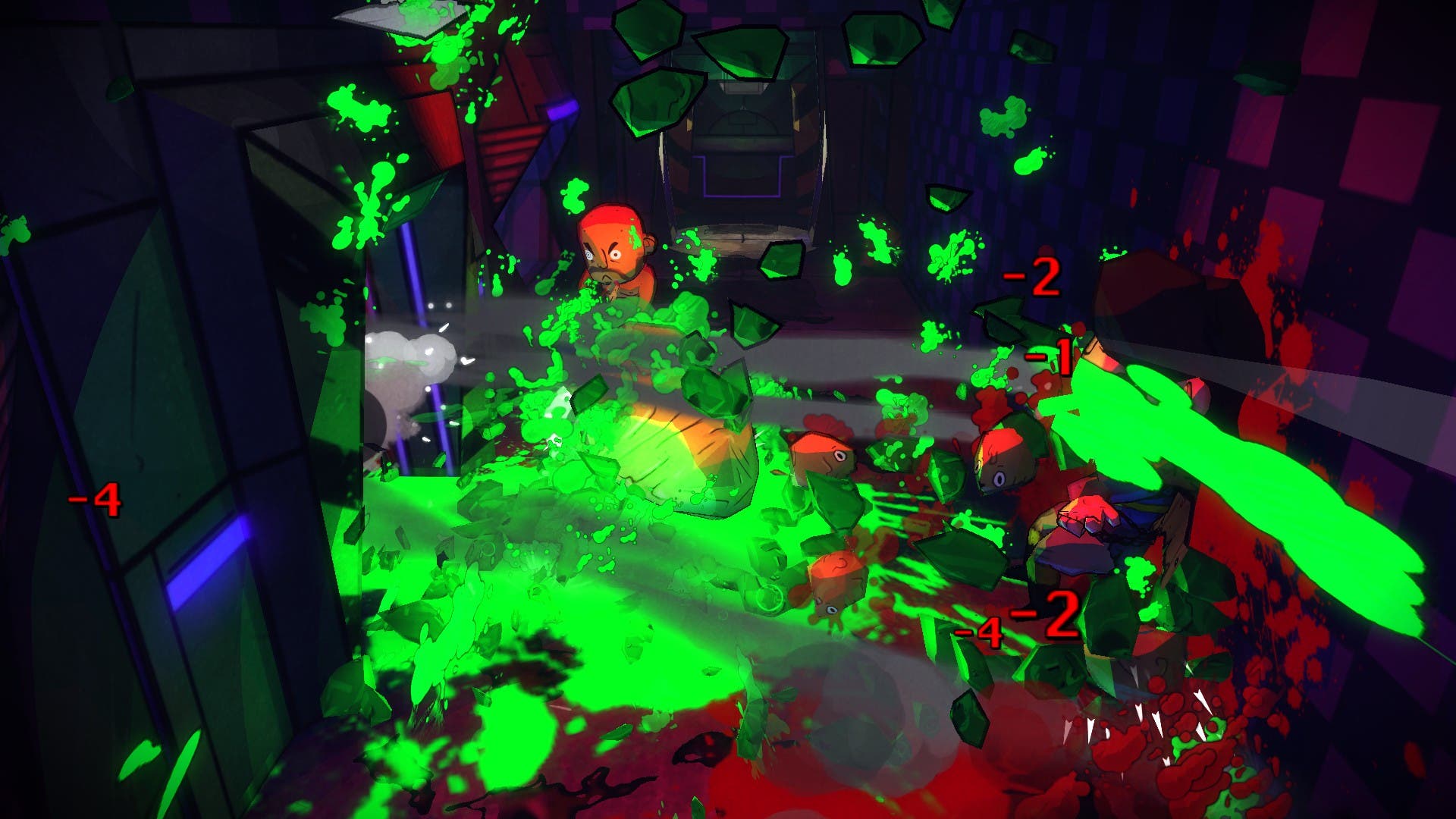 WASTED has the tagline of “A Post Apocalyptic Pub Crawl”, making it the most likely of scenarios of what humans would do, should a nuclear fallout happen. The double entendre that exists within its name is just great for this Fallout meets Borderlands roguelike. While some might run at merely seeing or hearing the word, I assure you it isn’t “one of those” games. WASTED is unique take on the genre, and is one that will have you going back to the cooler many times.

As the nuclear war that left America a wasteland full of rads, the rich and powerful retreated to underground bunkers known as “coolers”, which didn’t work and everyone died anyway. Those who survived and thrived, were left to do as they see fit. Booze was one of the things that survived, thrived, and even mutated thanks to radiation. After an obligatory tutorial sequence, you’re off to create your own character. Which, after I died, realized was a waste of time. When you respawn, you take over someone else that’s randomly created by the game. This is a roguelike after all, where attachments to characters should never be given.

WASTED pays closer attention to fluids and foods that most games do not. When not at full health, you can eat any number of food items, or take medication to heal up. Everything has positive and negative status effects. For instance, eating junk food leaves you stuffed and slowed, and in a food coma which won’t let you eat again until the timer expires. There are unmarked flasks that can be drank that give you a temporary buzz, and will either buff or nerf you, and that random chance is the risk you take. On every third level of a cooler run, you will come across booze that will have you passout, and return home with a hangover which grants a negative benefit to the player for that character’s run. The positive side, is that you are able to return safe and maintain your character for another run, sell items, and complete quests.

Keeping yourself alive is through the use of weapons like crowbars, knives, pistols, shotguns, trip mines. You can grab bricks and bottles to use as throwables. Being a game that has RPG-like properties, there is your S.H.O.T.S. (like S.P.E.C.I.A.L. from the Fallout games) which controls Shoot, Hit, Oblit, Tinker, Sneak. Each of these can be buffed through buzz drinks, or armor that you find or craft and equip.

There will be many dead raider bodies to loot, and doing so automatically grabs can openers for opening locked doors, TP (toilet paper) for currency, and ammo. Food and clothing items will have to be chosen, and your limited inventory will keep you from just grabbing everything. Items do stack, but only up to five of the same item before you can no longer carry it. There’s a copious amount of fanny packs that help increase your inventory size to let you carry more. Another way to at least keep items safe should you not survive a run, is the Ony Express, a way to ship items from a cooler to your home for safe keeping.

The quest system to WASTED allows you to take on ways to earn unique items or recipes to enhance your player character and perhaps last longer with them equipped. As there’s a high rate of character turnover, the quests go with them, and don’t really make sense as to why they do. Exploring a cooler is often very similar looking from the last, with rooms being procedurally thrown together to create and entire floor. The loot is also similar too, as they will be not unique named or items with properties unique either. WASTED almost punishes players for exploration, because if you hang out too long in a cooler and a death squad comes for you. It’s sometimes hard to get out due to labyrinthine levels.

If running the coolers once more isn’t enough and you want to get more competitive, there’s a daily challenge inclusion to get you on a leaderboard. A daily challenge mode is standard for roguelikes. This though, is another distinctive way of handling it, called the “Courier Run”. You have the ability to do a practice run to get used to it, but you’ll hear the tale of how a courier had a run, and get to replay it.

From the font to the UI, the curious Courier font is used. Perhaps a subtle nod with the courier faction in the game. Computer terminals house strange conversations and information, but sometimes grant a new recipe to brew at home to concoct more powerful drinks. WASTED has an awesome cartoonish look, with some really great art, but the faces of people was never something I enjoyed looking at. It was like a nuclear wasteland of Wind Waker or something. That, coupled with the many similarly looking levels, is a bit disappointing.

In terms of stability, I didn’t have any issues playing the game or anything that got in the way of me having a good time. I did have one issue where I broke the game trying to trade scalps which were part of a quest I completed and had zero value. Beyond that, WASTED works as intended. WASTED is a roguelike, but is definitely one of the better ones out there. Its loot system and randomly generated levels leave a lot to be desired, but this is the creation of one-man who has generated a lot of entertaining places to visit, people to talk to, items to craft, and loot to find. It’s also difficult, wanting to kill the player every opportunity it has. WASTED has a misanthropic charm I can get behind.