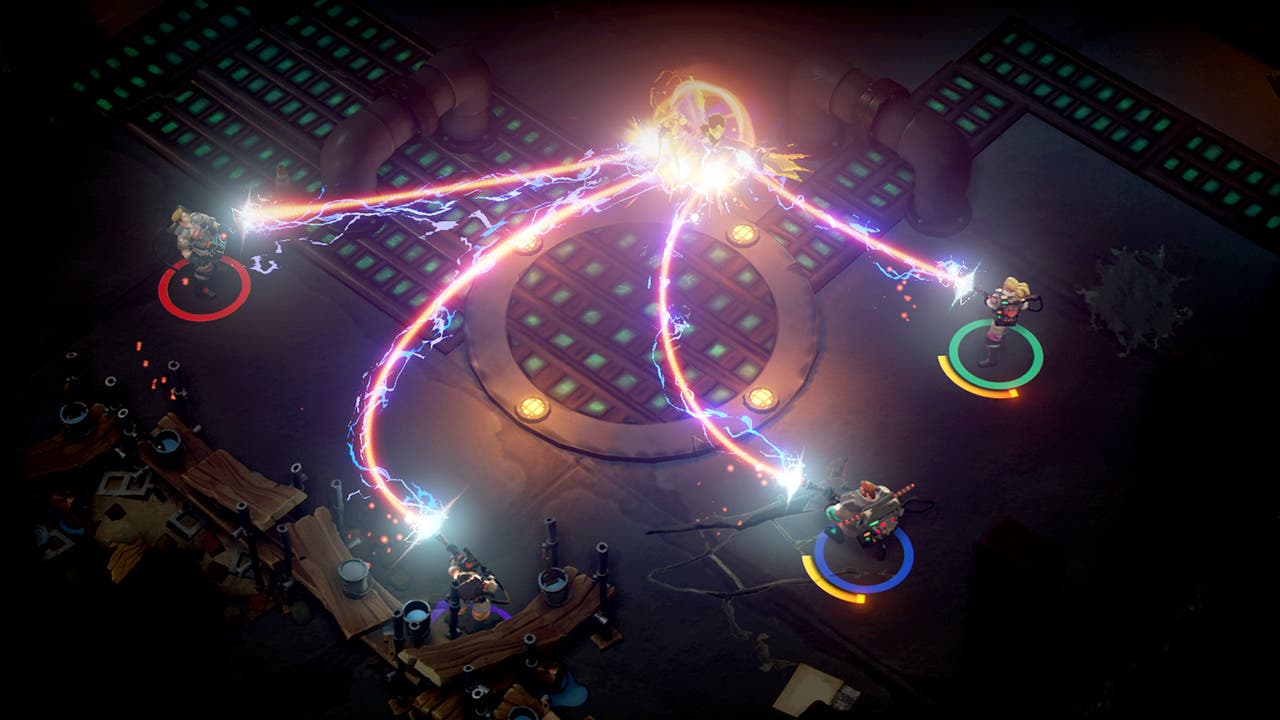 There’s nothing more concerning than the release of a videogame around the release of a motion picture film. It feels like a quick cash-in and usually leads to a major letdown as either the game replicates the events of the movie. Ghostbusters however, goes in a unexpected direction, going for all-new characters with seemingly no tie-ins to any movie, past or present. The experience, while it is entertaining early on, quick fades into a dull-drum wade through repetition and boredom. One of the bullet points for the game is: “Blockbuster Film Extension: An original story that takes place after the events of the movie!” Which movie? The game will never tell you, even in its introduction cinematic. Though one can assume they mean the latest movie, the lack of specifics are bothersome. There’s a story to Ghostbusters , but it is very loose as to the goings on. Even the game’s direction isn’t very consistent, it is an amalgamation of Ghostbusters ’84, Real Ghostbusters, Xtreme Ghostbusters, and even this year’s Ghostbusters gals in ways of style and visual representation. But the game in no ways pulls in single character from the franchise not even through voice or reference to tie any of it together. It does propose an idea of “Ghostbusters, Inc.” that I can get behind, but doesn’t solidify those ideas in any meaningful way.

Ghostbusters is simply a twin-stick shooter that has RPG elements of being able to level up. Each character is unique in the weapon they carry, but not much else. There’s a recharge on everything, from waiting for grenades to be ready to your dodge roll, and waiting for your weapon to cooldown if you don’t manually do it. Everything feels like a chore, even movement. You can increase a character’s move-speed, but why? Why can’t these characters just move at a decent speed to begin with? The creatures of Ghostbusters you face are borderline human with its use of zombies to the expected ethereal spirits. And sometimes enemies fly in a formation like Galaga enemies do when they appear on screen. Some ghosts will need to be captured, and to weaken them you have to use the “slam” feature, a thing you had to do in the 2009 Ghostbusters game that I wasn’t a fan of then, and definitely not a fan of now. It’s a very clunky mini-game that just slows the game down more than your characters can move.

The eight levels of Ghostbusters are visually diverse, yet are generic and cliche as you will traverse graveyards, libraries, and asylums as places that have been haunted in the city. It is weird when the game introduces flaming skulls coming on screen in formation like Galaga enemies. Don’t let the list of levels fool you, some levels are multi-part, or include a remix level. These add some length to the game as one level can take half an hour to complete, but some levels seem to drag on, and you’re facing the same hordes of enemies over and over again. Maybe there wasn’t enough time to secure the rights, but the game’s theme song is the classic Ray Parker, Jr. song, and not the new Fallout Boy version. Not to say it is any better, but for something to somewhat promote the new movie, there is just nothing to show there is any faith in it. Ghostbusters runs on Unreal Engine 4, and with its cartoonish look does have something going on visually, it has a comic-book look and feel is appropriate and dazzles with its particle effects of the proton beam, but is pretty standard looking otherwise.

Co-op is the ideal way to play the game, but it is only done with local multiplayer. Those looking to go online to gather some friends across the nation will be sorely disappointed. Though the idea of forcing everyone onto a couch to play isn’t the worst thing in the world, but isn’t always convenient. What makes co-op ideal, is that the AI is so terrible at playing the game, they always have the least amount of health, are dying in need of reviving, or if you go down, will do everything they can to avoid picking you up for as long as possible. They’re barely competent to get through a level together. At $50, Ghostbusters’ pricetag is insulting. There’s an odd compulsion to return to Ghostbusters but the lack of thrills, excitement, and overall enjoyment permeates throughout as it avoids letting you play as your favorite Ghostbuster (old or new) while delivering unsatisfying gameplay in what the publisher calls action RPG, but hardly resembles. If this game were called anything else and the license wasn’t attached to it, nothing would have changed – it would still be a one-note game that never changes its tune. I wish Activision and FireForge Games would have captured the spirit of Ghostbusters, but instead just lets it go.

A Steam code for the game was provided by Activision for review purposes.